Screenwriting Tips to Improve Your Novel Writing by Don Calame

Many, many novel writers like to imagine their completed book one day on the big screen. But what if we go into reverse -- what if we look to the techniques of screenwriting to help understand storytelling? Don Calame is both a novelist and screenwriter, and he joins us today to give some insight into how these two creative forces both relate and differ from each other. I love his whole article, but this line really hit home -- I need the constraints that good pacing puts on a story. Be sure to check out his newest release, Dan vs Nature, at the end. Thank you for joining us, Don!

When I speak at schools and book festivals I’m often asked how my work as a screenwriter has informed my novel writing: If the two are very different, if I use my movie making experience to help craft my books, if I’ve found transitioning from film writing to novel writing a challenge.

It’s a complex question that, in a live setting, I try to answer the best I can in as concise a way as possible. However, I think it’s a topic that deserves further consideration.

At first glance it may seem that screenwriting and novel writing couldn’t be more dissimilar. All you have to do is lay a page from a screenplay and a page from a novel side by side and you can see that the two really look nothing alike.

In fact, if you’d never read a screenplay before and picked one up for the first time you might find it a bit challenging to decipher exactly what was going on. There is a screenplay vernacular that you need to become familiar with before you’re able to make sense of what you’re reading. It’s not that it’s oh-so-complicated to figure out, but there is definitely a bit of a learning curve.

However, once you figure out that INT. means “Interior” and EXT. means “Exterior,” that dialogue is written not with quotation marks but centered on the page under the characters’ names, that sounds are written in all caps, that there are no interior monologues, that scenes jump from one to the other without any transition, and that descriptions are kept to a bare minimum, things start to become a bit clearer.

But when you shift from how different a script and a novel look to what it takes to craft each of them on a cellular level, things actually begin to feel more similar than not. At least they do for me. After all, storytelling is storytelling. Plot is plot. Character is character. Structure is structure. And in these ways screenwriting and novel writing are more alike than not.

One of my very favourite writers, Richard Russo, once said when comparing screenwriting to novel writing that the biggest difference between the two is the amount of tools you have in your writing toolbox. Screenwriting has certain constraints that novel writing does not, one of the biggest being the time you have to tell your story. You can take as long as you need to with a novel but you only have two hours (120 pages) to tell your story in a film. And, of course, there is the fact that you can enter a character’s mind in a novel, describing feelings, thoughts, worries, fears, anxieties, which you have to do strictly with visual clues in a film.

Yet when I sit down to start a new book the very first thing I do is beat out the story exactly the way I would outline a movie. I split up the novel into three acts, search for the big turning points in the tale, work out what the ending will be (though this can and often does change as the writing progresses). For me, this outlining is a vital step because it’s a crucial part of getting the pacing of the book correct.

The biggest mistake I made when I wrote my first novel was to think I had complete freedom, that I could write whatever I wanted to because, hell, I was writing a novel not a movie and novels can meander, can digress, can take their time. Here was my magnum opus, my Great American Novel, my seven hundred page nonsensical slog of a book that will never see the light of day.

Beyond being completely discouraging and a hot mess, that first book was a huge learning experience. I discovered that – script, novel, or epic poem -- I need structure when I write something. I need that safety net. I need the constraints that good pacing puts on a story.

Look, the fact is, some people may be able to sit down, start writing, work their way through an entire novel and end up with a well paced, tightly structured, compelling story.

That’s just not me. And I think it’s extremely important to know what kind of writer you are. What works for you and what doesn’t.

I happen to like a story that pulls me along at a nice clip. I like scenes that I can visualize, that create that movie in my mind. I like dialogue that sounds realistic and has a rhythm to it. All these things can be found in film writing and this is where my screenwriting has helped me the most in working on novels.

That’s not to say I don’t enjoy using the extra tools in the novelist’s toolbox. I do appreciate the extra time I have to tell a story in a novel. I love that I can hang out inside a character’s head and hear their thoughts, their feelings. And I definitely welcome the opportunity to describe a setting with more than a slug line consisting of INT. CIRCUS TENT – DAY and a character with more than “early 30s, short, acne-scarred.”

It’s just that on a skeletal level -- the place where your story is either going to be able to stand tall or collapse under the weight of a lot of superfluous detours and asides – you could do a lot worse than structuring your novel like a film. Especially when one is writing YA fiction, like I do, where your audience has seen hundreds of films and television shows and already has that tight pacing ingrained in their subconscious. 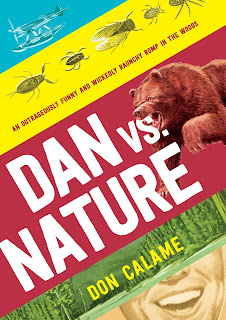 Shy and scrawny Dan Weekes spends his time creating graphic novels inspired by his dream girl and looking out for his mom as she dates every man in the state of California. Then his mom drops a bomb: she and her latest beau, Hank, are engaged, and she’s sending her “two favorite men” on a survivalist camping trip to “bond.” Determined to trick Hank into showing his true — flawed — colors on the trip, Dan and his nerdy germaphobe best friend, Charlie, prepare a series of increasingly gross and embarrassing pranks. But the boys hadn’t counted on a hot girl joining their trip or on getting separated from their wilderness guide—not to mention the humiliating injuries Dan suffers in the course of terrorizing his stepdad-to-be. With a man-hungry bear on their trail, no supplies, and a lot of unpleasant itching going on, can Dan see his plan through now that his very survival depends on Hank?

From screenwriter Don Calame comes another outrageously funny and raunchy tale of teen boys whose plans go awry — this time, on a survivalist camping trip. 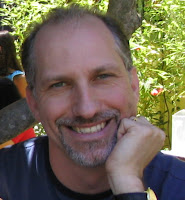 Don has written screenplays for Universal Studios, Marvel Entertainment, Paramount Pictures, Lions Gate Entertainment, Village Roadshow Pictures and the Disney Channel. He was the screenwriter for Employee of the Month (Lions Gate Films, 2006) and Hounded (Gaylord Films/Disney Channel, 2001). In 2009 the film rights for Swim the Fly were optioned by Paramount Pictures and Don was hired to write the screenplay based on his novel.

Don lives with his wife and two dogs in the Pacific Northwest.