Meredith Russo, author of IF I WAS YOUR GIRL, on power fantasies being important

We're happy to have Meredith Russo join us to share more about her debut novel IF I WAS YOUR GIRL. 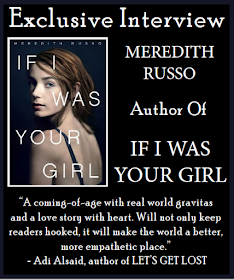 Meredith, what was your inspiration for writing IF I WAS YOUR GIRL?

(Spoiler alert) The hardest scene to write was the one with Parker after homecoming. It’s kind of brutal, and it’s something I don’t like to think of anyone going through even though I know it happens. It’s not my favorite scene in the book though; that honor goes to the confrontation between Amanda’s dad and Grant!

Adam by Ariel Schrag, Beautiful Music for Ugly Children by Kirstin-Cronn Mills, Luna by Julie Anne Peters, and (it’s a manga but bear with me) Wandering Son by Takako Shimura. If you’re in the market for adult fiction, you can never, ever go wrong with A Safe Girl to Love by Casey Plett and Nevada by Imogen Binnie, both of which are required reading if you want to know what it’s like to be a (white) trans woman in her twenties in America and Canada.

How long did you work on IF I WAS YOUR GIRL?

About a year and a half.

If I Was Your Girl taught me that power fantasies are important. I didn’t conceptualize it this way, but halfway through I realized I was writing a power fantasy for young trans girls. Lambertville isn’t a realistic place. The way people react to Amanda isn’t realistic. I made a small Southern town the way they should be, and I made people react to Amanda the way people should react to trans girls, because that’s what I needed when I was a kid.

What do you hope readers will take away from IF I WAS YOUR GIRL?

The road wasn’t very hard for THIS book, actually! I think I was lucky because I proposed the project at a moment when cultural attention was really starting to focus on trans issues. It was a “right place, right time” thing.

That’s where the flashback scenes come from, actually. I originally did them as an exercise to get into Amanda’s head better -- I hadn’t intended for her transition to occupy any of the book’s real estate because, honestly, most books about trans characters are obsessed with transition, but then I showed the pages I’d written to my editor and she was like, “These are perfect! We have to include them!” so we did! I’m glad we did, honestly, because I think the focus is still on Amanda’s post-transition life but those scenes add a lot of texture to the story that wasn’t there before.

I write at home, with either The Mountain Goats or My Chemical Romance (my two favorite bands) blaring at top volume.

Write something every day even if it’s just a few sentences. Write as much as you can. Never, ever turn down paying work.

Two new books! I can’t go into too much detail but one is another YA novel about a trans girl and the other is a much grittier, more adult examination of what it’s like to be bitter, lonely, and trans in your twenties.

Amanda Hardy is the new girl in school. Like anyone else, all she wants is to make friends and fit in. But Amanda is keeping a secret, and she’s determined not to get too close to anyone.

But when she meets sweet, easygoing Grant, Amanda can’t help but start to let him into her life. As they spend more time together, she realizes just how much she is losing by guarding her heart. She finds herself yearning to share with Grant everything about herself, including her past. But Amanda’s terrified that once she tells him the truth, he won't be able to see past it.

Because the secret that Amanda’s been keeping? It's that at her old school, she used to be Andrew. Will the truth cost Amanda her new life, and her new love?

Meredith Russo's If I Was Your Girl is a universal story about feeling different—and a love story that everyone will root for.

MEREDITH RUSSO was born, raised, and lives in Tennessee. She started living as her true self in late 2013 and never looked back. If I Was Your Girl was partially inspired by her experiences as a trans woman. Like Amanda, Meredith is a gigantic nerd who spends a lot of her time obsessing over video games and Star Wars.

If I Was Your Girl is her debut novel, but definitely not her last. When she's not busy writing she can be found reblogging pictures of cats and babies, reading high literature (and definitely not fanfiction and fantasy novels), arguing with strangers about social justice, and, of course, raising her two amazing children, Vivian and Darwin.

Have you had a chance to read IF I WAS YOUR GIRL yet? Do you write to process your own feelings? Do you write something every day? Share your thoughts about the interview in the comments!