L.E. Sterling, author of TRUE BORN, on taking yourself and your writing seriously

We're pleased to have L.E. Sterling here to give us the scoop on her novel TRUE BORN.

L.E., what was your inspiration for writing TRUE BORN?

True Born is inspired by a couple of important stories - the calamitous state of our environment, for instance. But the unique story of Lucy and Margot is inspired by my great-grandmother. As the story goes, my great-grandmother was an identical twin who, at a very young age, was sold by her widowed mother and shipped to the U.S. to be an indentured servant. But she was very young, so when she arrived in North America she had forgotten her own identity and had, instead, taken on her twin’s. It’s this kind of remarkable connection – the one that won’t be diminished, no matter what - that fired my imagination for a long time, and I fed that into the bond that Lucy and her sister Margot share. 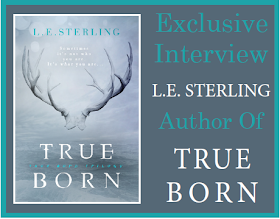 I don’t want to give too much away for those whom haven’t read the book, but I’d have to say the scene in which Lucy and Jared and the rest of the True Borns launch a rescue mission for Margot was really tough. Why? It was one of the first action scenes that I wrote in the book - and writing good action is hard! Also, there were some really tough emotional elements to this scene.

What book or books would most resonate with readers who love your book-- or vice versa?

Hmm. This is a tough one. I honestly can’t say I have read a YA novel quite like this before. That’s one of the reasons I wrote it (my motto is: write the book you most want to read). Having said that, though I have read a lot I haven’t read everything! So I would LOVE to hear what your readers (and readers of True Born) think.

How long did you work on TRUE BORN?

I worked on True Born on and off for about eight months before it was published, and at least another six months editing. I originally wrote True Born as a novella that I released on Wattpad. It was only supposed to be a backstory for another series of books I thought I was going to write. Foolish me!

The response by readers on Wattpad was so phenomenal -– and this story so compelling for me -– that I just had to turn it into a novel…. And now I’m busy turning it into three.

I learn from everything I write. By the time I got around to writing True Born I had already published two novels and written several others, so I “thought” I knew quite a bit. But I think this is the novel where I have learned the most – and a good editor really helps with that! Through the process of writing this book I learned more about pacing, about language, about narrative arcs and the dynamics between characters… it was and still is an awesome voyage!

What do you hope readers will take away from TRUE BORN?

I hope True Born fires readers’ imaginations. As I said, I write the books that I most want to read, so I would like readers to be as enthralled by this world as I am, and as taken by the sparks between Lucy and Jared as I am.

I published The Originals (under the name L.E.Vollick) in 2002. I was pretty lucky, actually. The novel was my master’s thesis, and for an indie book it did very well. It was taught in a college in Quebec, Canada; it was translated and published in French. I published my second novel, an urban fantasy novel by the name Pluto’s Gate, in 2013 - with the same small press. It was while I was writing Pluto’s Gate that I became very serious about writing sci-fi and fantasy novels, and ended up writing two others that, to this point, haven’t been published (that is, if you don’t count the one I wrote when I was eleven!).

There was this day a couple of weeks after I’d posted True Born on Wattpad: I had received literally hundreds of comments from fans of the work, and it had been the top-rated story on Wattpad for weeks, and the counts kept climbing - at one point it had climbed to over 500K reads. But there was this one morning I opened my inbox and read this incredible, supportive fan letter from a reader. And that was the day I suddenly realized, oh, holy cow - I’d better write this into a novel right away and get it over to my agent!

During the week I get up and write every morning at around 5 a.m. (before I go off to my day job). I have a cup of coffee, read some news, write in my journal, and then get to work. And yes, I absolutely listen to music - it’s essential! On the weekends sometimes I’ll venture out to work at a café but the vibe has to be just right - and the staff friendly!

Don’t give up. I’ve been writing for a very long time, and I can honestly say that the harder I work, the luckier I am. Take yourself seriously, do the work, write every day, learn what you can about the business of writing and the writing business (two different things). And when you think you’ve given up, know that you haven’t!

What are you working on now?
I’m working on the second and third books of the True Born series. I really love this series, and I hope readers of the first book will love the next two just as much as I do! After the great Plague descended, the world population was decimated...and their genetics damaged beyond repair.

The Lasters wait hopelessly for their genes to self-destruct. The Splicers pay for expensive treatments that might prolong their life. The plague-resistant True Borns are as mysterious as they are feared…

And then there's Lucy Fox and her identical twin sister, Margot. After endless tests, no one wants to reveal what they are.

When Margot disappears, a desperate Lucy has no choice but to put her faith in the True Borns, led by the charismatic Nolan Storm and the beautiful but deadly Jared Price. As Lucy and the True Borns set out to rescue her sister, they stumble upon a vast conspiracy stretching from Dominion’s street preachers to shady Russian tycoons. But why target the Fox sisters?

As they say in Dominion, it’s in the blood.

L.E. Sterling had an early obsession with sci-fi, fantasy and romance to which she remained faithful even through an M.A. in Creative Writing and a PhD in English Literature – where she completed a thesis on magical representation. She is the author of two previous novels, the cult hit Y/A novel The Originals (under pen name L.E. Vollick), dubbed “the Catcher in the Rye of a new generation” by one reviewer, and the urban fantasy Pluto’s Gate.

Originally hailing from Parry Sound, Ontario, L.E. spent most of her summers roaming across Canada in a van with her father, a hippie musician, her brothers and an occasional stray mutt – inspiring her writing career. She currently lives in Toronto, Ontario.

Have you had a chance to read TRUE BORN yet? Have you put any of your writing on Wattpad? Are you learning about both the business of writing and the writing business? Share your thoughts about the interview in the comments!