Debra Driza, author of MILA 2.0: REDEMPTION, on perseverance being everything

MILA 2.0: REDEMPTION is the final book in the MILA 2.0 series, and we're excited to have Debra Driza join us to share more about it. 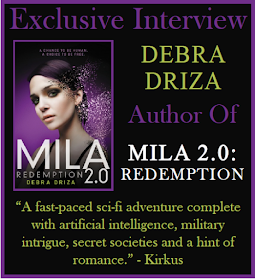 Debra, what book or books would most resonate with readers who love your book--or visa versa?

I think readers who enjoyed MILA would also enjoy REBOOT by Amy Tintera, PROJECT PAPER DOLL by Stacey Kade, SKINNED by Robin Wasserman, UNREMEMBERED by Jessica Brody, and The ADORATION OF JENNA FOX by Mary Pearson. (Side note: Author Veronica Roth recommended MILA on her blog to her readers, but I figure anyone who’s read MILA has probably already read DIVERGENT, HA!)

Writing this series taught me so much that it’s hard to know where to start. Let’s see—I learned that writing on deadline is a whole different beast than writing on your own schedule. I learned that I am fascinated with characters probably more than just about anything else, which is one reason why my current manuscripts are all contemporary. I learned that collaboration is both rewarding and challenging, that even if you outline, your plot isn’t set in stone, and that some days, struggling with ADHD makes accomplishing as much as you want feel almost impossible. I also learned that there’s nothing quite like the giddy buzz of typing the very last word on a manuscript, or the heart-swell of touching a shiny, finished copy of your book in your hands for the very first time.

What do you hope readers will take away from MILA 2.0: REDEMPTION?

More than anything, I hope readers will take away the importance of self-acceptance, and how no one’s opinion of you matters as much as your own. At the same time, I hope they realize how crucial it is to surround yourself with people who both accept and believe in you. There’s a difference between desperately seeking external validation and holding tight to those special people who lift you up. Finally, I hope they leave the MILA series realizing that we must experience both challenges and failures to evolve into the best humans we can be, because it’s only through risking and stumbling and reaching that we truly grow.

My first failed attempt at a book was a Harlequin Romance, many, many moons ago. In a word, it was bad. Like, cringe-worthy bad. I may have been a little over-enthralled with the canine character. My next attempt was a college-based paranormal romance. I queried a handful of agents before realizing that I wasn’t quite there yet as an author and trunking it. My next manuscript was a YA urban fantasy. That’s the one that nabbed my agent and got me close to a contract with a Big 6 publishing house. MILA 2.0 was my next book. So, all in all, I probably wrote for around 2-3 years total before getting my first book deal.

Oh, god, no…but if such a key exists, I’m willing to pay top dollar! I always think that, once I finish a novel, the NEXT one will be complete cake. Then, I open up a shiny blank page, only to have a total meltdown when I realize that I have 100% forgotten how to write and I am a complete hack and whyyyyyy? (It comes back…eventually! But I would seriously love to start off one novel feeling all DAMN, I AM THE BOMB.)

Ritual? What is this magical entity of which you speak? Here’s the thing—I kind of suck at rituals. I’m actually in the process of working to come up with better writing habits/rituals, in the hopes of better managing my focus and motivation.

I write at Panera sometimes, in a booth with my back to the wall. I write at home, too. I don’t typically use music because lyrics distract me and finding just the right soundtrack often devolves into a giant time suck. I do plan out scenes with music, though, usually while jogging.

You’ve heard it all before, but I can’t say it enough: write, write, write. To become a traditionally published writer, perseverance is often everything.

Like I mentioned above, I’m working on a couple of contemporary manuscripts. One features a field hockey star with ADHD whose impulse control issues on the field force her to choose: either get kicked off the team for good or sign up for an intensive (and, in her mind, seriously lame) empathy training program. Everyone in my house from my kids to my husband to myself struggles with ADHD, so it’s an #ownvoices story, and a subject about which I feel very passionate. As a child, I had no idea that I even had ADHD, but I definitely struggled in areas of impulse control and organization, and recognized many ways in which I behaved and felt Other. As a parent and teacher, I experience firsthand the challenges in holding children and teens accountable to behavioral standards while at the same time, not mindlessly punishing those individuals with invisible disabilities for behaviors that they might not even be aware of and have a very difficult time controlling. It’s an incredibly hard line to walk; one made even more difficult by the persistent misconceptions surrounding ADHD, including the damaging idea that’s it a made-up disorder. Unfortunately, there are a lot of people who jump right in and judge without educating themselves, and while that’s understandable, it can still really hurt. That’s why empathy is such an important concept for me.

Um, did I mention that I feel passionately about this topic? ☺

Mila has been running for her life for so long. But there might be nowhere left for her to go. Especially now that she’s an incredible danger to herself and anyone who dares get close to her.

That’s why Mila has gone into hiding with her friend, tech expert Lucas. She can’t take the risk of hurting people worse than the way she hurt Hunter: the boy she’ll always love, the boy who might never forgive her for what she’s done.

But then Mila discovers that General Holland has plans that are an even bigger threat to humanity than she is. Mila must make a choice: either push aside her fears and fight him with everything she’s got...or turn her back on the world forever.

This last book in Debra Driza’s exhilarating and thought-provoking MILA 2.0 series will surprise and thrill readers to the very end.

Debra Driza is a member of the teen lit blogging groups the Bookanistas and The League of Extraordinary Writers, and a former practicing physical therapist who discovered tormenting her characters was infinitely more enjoyable. These days you can find her at home in California, adding random colors to her hair and wrangling one husband, two kids, and an assortment of Rhodesian Ridgebacks (most of them naughty).

MILA 2.0 is her first YA novel in a planned trilogy from Katherine Tegen Books/HarperCollins. It's currently in development with Shondaland production company (Grey's Anatomy) to become a TV series for ABC.

Have you had a chance to read MILA 2.0: REDEMPTION yet? When you outline, do you feel like your plot is set in stone? Do you feel like you have forgotten everything when you start writing a new book? Share your thoughts about the interview in the comments!