Anna Woltz, author of A HUNDRED HOURS OF NIGHT, on using real events in your story

We're pleased to have Anna Woltz swing by to give us the scoop about her latest novel A HUNDRED HOURS OF NIGHT. 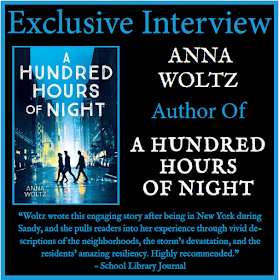 Anna, what was your inspiration for writing A HUNDRED HOURS OF NIGHT?

Three years ago I decided I needed a break from writing books: I was thirty and had already written eighteen books. My solution? I booked a ticket to New York and stayed there for three months. During those months – while falling in love with the city - I was looking for a topic for my new book. I considered writing a historical novel about nineteenth-century New York, but then Hurricane Sandy happened. During the hurricane and the blackout that followed the hurricane, I was completely caught up in securing enough food and warmth for myself, and power for my cell phone – but as soon as the lights went back on, I decided I had found my story: I would set my next book in New York during Hurricane Sandy.

A Hundred Hours of Night is really close to my heart, so there are dozens of scenes that I love. The revealing conversation between Emilia and Seth was particularly hard to write: this is a key scene in the book, because Emilia tells both Seth and the reader why she has fled from the Netherlands. I rewrote this scene a hundred times, but in the end it became exactly what I wanted it to be.

This is such a difficult question! My book is a mix of so many themes... I’m not saying my book is really like these books – but at least these books are always examples of what I love in literature: I long for the romance of Pride and Prejudice by Jane Austen, the directness and the reality of what it feels like to be a teenager of Catcher in the Rye by Salinger, the charm of John Green, the psychology of Sharon Creech, the fun of Bridget Jones’s Diary by Helen Fielding...

How long did you work on A HUNDRED HOURS OF NIGHT?

Going to New York all by myself for three months made me realize how grown up and independent I am – and that it is really possible to influence the course of your own life. It was a bit scary to go and live in NYC all by myself, but I loved every minute of it. Surviving Hurricane Sandy was quite empowering in a way – I didn’t freak out, I didn’t cry, I just went through it all by myself. Of course I know I was really lucky: my house wasn’t destroyed, my neighborhood didn’t flood – but still: I was there in the dark, all by myself, far away from home... Writing the book taught me you shouldn’t underestimate using real events in your story: using reality makes writing harder, not easier. I really, truly know how it felt to walk those grey, deserted streets in post- hurricane New York – and I wanted to convey that true feeling to my readers. That was extremely hard, because I didn’t want to describe things how they sort of were – I wanted to describe them how they really were. I think I succeeded, and that was most empowering of all.

What do you hope readers will take away from A HUNDRED HOURS OF NIGHT?

I hope they will enjoy an exciting, romantic, interesting, funny story – but I also hope they will think for a minute or even a day about their own use of mobile phones and the internet, and about the influence social media have on our lives. I’m 34 now, and I can remember what life without a cell phone was like; when I was in primary school, no one had a cell and in high school just a couple of students had mobile phones. I bought my first cell when I was nineteen, and I’m glad that I know what it was like to live without one – and without all those social expectations and digital bullying and FOMO that come with social media. I don’t know exactly what Twitter is like in America, but in The Netherlands people can be so shockingly crude and hateful and mean on Twitter – it’s really scary sometimes. I wonder whether we want to live in a world where people are publicly judging and digitally bullying each other every other day.

I was really lucky: I first started writing when I was twelve, so I had a couple of years in secondary school where I could practice in peace and quiet. I was living with my parents so I didn’t have to earn my own money and writing was just a hobby. I wrote my first book when I was seventeen; the fourth publisher I sent the book wanted to publish it, so the book was published in 2002, when I was twenty. I studied History at Leyden University and after that I became a fulltime writer: A Hundred Hours of Night is my eighteenth book. It’s the first book translated into English, which is really exciting. Up till now my books have been published in Dutch (well, of course – that’s my own language!), French, German, Slovenian, Hungarian, Danish, Norwegian, Japanese and Taiwanese. This list makes me truly happy; it’s such a wonderful idea that children and teens from all over the world are reading my books.

For me, the AHA! moment was that there is no AHA! moment. Writing a book is a huge project; it’s the most exciting thing I know, but it can be – it has to be – tedious and extremely frustrating as well. You have no idea how many times I have rewritten some scenes. I used to rewrite maybe three, four times, but now I rewrite at least fifty times – and every time the scene gets a little funnier or more interesting or smoother or more original. I am so happy that my books are being received so well; they are winning more and more awards, are being translated – so one way or another, this extremely frustrating and tedious rewriting helps. So I keep doing it.

I work at home in absolute silence. I live in the city centre of Utrecht, a really beautiful 900 year old city in the middle of the Netherlands. In the morning I often go for a walk along the canals – we have canals and beautiful old houses just like Amsterdam, just not as many tourists. About fifty days a year I visit schools and libraries throughout the country to talk about my books and about inventing stories. I really love doing this, and after a day full of enthusiastic teens (yesterday I was at a school where I visited three groups of 90 fourteen- year-olds), I’m ready for a new day of rewriting – or ready to write an exciting new scene.

Read as many books as you can! Practice writing! Read even more. Don’t be put off if you think writing is hard – writing IS hard! Reread the books you love most. Rewrite. Read slowly, paying attention to every detail. Write some more. Have fun. Live. Love. And then write about it. Part love letter to New York, part portrait of a girl and a city in crisis as Hurricane Sandy hits New York City.

When Emilia de Wit ran away to New York City, she planned everything to a T. Plane ticket, purchased. Cute apartment, rented online. Subway map, printed and highlighted. This was no ordinary trip -- this was Emilia's declaration of independence. Her chance to escape the life her parents were ruining. To get away from the horrible scandal that had rocked Amsterdam, the scandal that was all her dad's fault. To see if her mom, the glamorous, world-famous artist, would even notice.

New York steals Emilia's heart at first sight -- even though absolutely nothing goes to plan. She didn't plan to end up homeless on a stranger's doorstep. She didn't plan to make friends with Seth, Abby, and Jim. And she could never have known that Hurricane Sandy would be barreling up the coast, straight for the city.

All she wanted was to get away from her parents, her problems, her life . . . and when the storm hits and the power goes out, Emilia feels farther from home than she could have imagined.

Anna Woltz (b. London, 29 December 1981) is a Dutch writer. She has written twenty books for young readers. Some of her books are adventurous stories for ten-year-olds, others are challenging young adult novels. Her books have been translated into nine languages (English, German, French, Slovenian, Norwegian, Danish, Hungarian, Japanese and Taiwanese) and have won several prizes.

Have you had a chance to read A HUNDRED HOURS OF NIGHT yet? Have incorporated a big event that you experienced into your writing? Do you rewrite a scene at least fifty times? Share your thoughts about the interview in the comments!