Today, we're welcoming Adi Rule, author of STRANGE SWEET SONG, and the recent THE HIDDEN TWIN (March 22nd). Today, Adi is sharing her experience of growing up in a house where creativity -- and writing -- was a part of daily life, and how you can apply it to your writing process. Read and enjoy!

As a kid, it never occurred to me to want to be a writer. I was All About dinosaurs. I was going to dig up fossils, assemble skeletons, and draw magnificent beasts with brand-new skinny markers. (And then Jurassic Park came out -- holy mother of procompsognathuses! The only memory I have of my one sad stint at band camp is hurrying back to my tent to read Jurassic Park at every opportunity.)

My mom is a writer. Like a lot of kids, I just never thought I’d end up doing the same thing as my parents. I majored in voice. Want to hear my Jewel Song from Faust? It’s pretty good. But now, what do you know, here I am writing books. I’ve come at it sideways.

In my house, as in many houses, even those peopled with non-writers, story was always respected. Everyone in my family was always reading a book. We read aloud. My grandfather was a terrific storyteller; his charisma stat was through the roof. My dad published poems. My friends and I read each other’s work, collaborated, and shared books. We passed long, ridiculous notes in class. During silent reading, we sneaked glances at each other’s books, with discreet fingers pointing to particularly weird, funny, or grisly lines.

But growing up in a writing house taught me a lot more about how to be a writer -- or, more specifically, how to be the kind of writer who produces good work. I don’t mean there’s some shiny secret about how to turn into James Joyce or Diana Wynne Jones or Arnold Lobel. I mean the operative words here are “produce,” as in, being a writer who actually writes things, and “good,” as in the best work you can do.

The biggest deal is Writing Time. In the morning, my mom would be in her study with the door closed, and unless the house was on fire -- not just a grease fire in the kitchen or an accident with the chemistry set, but actively burning to the ground -- that door was to remain closed and un-knocked-upon. This is something I understand now; you can’t have other people in your head space while you’re working. Even small, delightful people, who may or may not have pictures of dinosaurs to show you.

Once, in first grade, I wasn’t feeling well at school. During Writing Time, when my mom had the house to herself. The nurse gave me the once-over, took my temperature, and called home. “Your daughter is sick. You need to come pick her up.” My mom’s response: “. . . How sick is she?” Writing Time was destroyed by life that day. My mother didn’t actually, rationally, blame me, but I was in the doghouse. Plus, you know, I was sick, so overall it was not a good day.

But it went both ways. The thing about growing up in a writing house is that other people understand what it means when you’re writing. I wrote all the time as a kid, and I drew every day, and I made up endless stories with my action figures. That alone time was always respected. There’s been a lot written lately about overscheduling kids, and although parenting debates aren’t my bag, I will say that I benefitted a great deal from being allowed to just be alone with myself.

That solitude was tempered with connection to community. When I was a kid, my mom was still teaching fiction at the university (where I would sometimes accompany her and draw dinosaurs on the blackboard). Because we lived in that sphere, I grew up seeing writing as a perfectly normal -- and common! -- profession. Books by people I knew came out, like, all the time. They weren’t always with big houses, or NYT bestsellers, or on Oprah, though sometimes they were. Mostly, I was surrounded by working writers -- hardworking writers -- who slogged from one book to the next, always moving forward. We went to their readings and launches. We sat on the folding chairs and ate Market Basket cookies. (My friends and I were pros at the breathy, drawn out iambic pentameter of the “poet voice.”) We bought the books. And they were good books. This was the writers’ world I knew as a kid: constant work, community support, and, usually, little financial or celebrity reward.

Nobody ever got that Ethereal about writing in my house. There were no discussions about your soul, or the gut-wrenching power of story, or how ink is like blood or whatever. We didn’t even talk about Craft. Writing wasn’t romanticized. It was a job. Butt in chair, fingers on keys. I’ve never heard my mother use the words “writers’ block.” You write, or you don’t.

That may have been the best lesson for me. You read, you write, you respect stories, you support other writers, and you figure it out. That’s not to say craft books are useless (I have several, two of which were written by my mom). It’s not to say story isn’t gut-wrenching and ink bloody and mystical. And I’m the first person to bust out the pom poms for my beloved alma mater, the Vermont College of Fine Arts. But I feel fortunate to have grown up experiencing the practical, day-to-day grind of the writer’s life. Now, when I feel the muse has left me, or I’m not inspired, or I’m listening a bit too closely to those wicked little brain demons who tell us how terrible and stupid our work is, I have a mental arsenal of faces and readings and books and Market Basket cookies from my childhood. They are practical, not sentimental. Butt in chair, they say.

And I can always call my mom, who says, “Stop whining and write your damn book.” But when she switches places with her sister, striking up a flirtation with the son of the Empress while working in the royal gardens and gets attacked by two suspicious priests on her journey home, she is forced to call forth fire to protect herself, unleashing her previously dormant powers and letting her secret out. She soon catches the attention of a cult with a thousand year old grudge as well as a group of underground rebels, both seeking her for their own gain. But when her sister goes missing and the Redwing uncovers a great plot to awaken Mol and bring fiery destruction upon them all, she is forced to embrace her powers.

In Adi Rule's stunning new novel, The Hidden Twin, the girl with no name, must finally choose a name and a path for herself, drawing a line between myth and history to prove herself more than a monster if she is to save both her sister and her home. 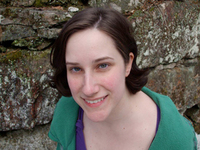 Adi Rule earned her MFA in writing from the Vermont College of Fine Arts. She is represented by Ammi-Joan Paquette of the Erin Murphy Literary Agency.