Sean McGinty, author of THE END OF FUN, on being afraid to finish the book

We're thrilled to have Sean McGinty stop by to tell us more about his debut THE END OF FUN.

Sean, what was your inspiration for writing THE END OF FUN? 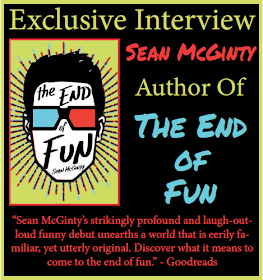 I found inspiration in a lot of places, but there were a couple moments along the way that were like booster rockets. I almost never show my early drafts to anyone, but way back at the beginning I read a tiny bit of the opening to Tara. Years later when we were in Colorado and I had pretty much given up on the book, I remember one day I was coming out of the basement and she was standing in the yard with her face framed in the sky, and she said, “You know that one story you started reading to me that one time? I liked that one.” That’s all I needed to hear. I started back in on it that day, and I mean I lived off of that bit of encouragement for years. (And married Tara.)

Another moment came as I was driving alone across the San Luis Valley in Colorado one afternoon—it’s difficult to articulate, but out of the blue I just felt this wave of peace wash over me, this stillness and connectedness. At the time I was just starting to get over a long period of being pretty depressed and upset with myself as a human being, and there was just this moment. I laughed out loud it was such a joyous event. If I said it was like god became air and rode with me for a couple miles in the passenger seat of my ’92 Honda Accord that might sound crazy. Anyway, I wrote about it a little in the book.

Like Aaron (the narrator) I spent part my life rejecting the idea of a benevolent power or anything like that—especially as it was presented to me in my religious upbringing—and then I spent part of my life being angry at whatever it was that may or may not exist. I think that moment in the car is when I started to make peace with that whole thing—or it started to make peace with me—and my journey with writing The End of Fun is what brought me to that place, and I’m very grateful for that.

How long did you work on THE END OF FUN?

From start to finish it was about 10 years—not working the entire time but a lot of it. I became afraid to finish the book because I didn’t want to see it rejected, so I just kept adding new elements to it, and it just kept growing. Eventually it was 100 chapters, and each had an image I’d created to look like something from Aaron’s semi-functioning eye camera. Then I got the idea that I’d make it all into an interactive web book—something you could view on a smart phone or tablet, with images, animations, sounds, and a comment section. That way, even if no publishers wanted it, when I was done with the story I would still have something to show for myself.

I didn’t know web design or animation, and I decided to do it all on my own, and it took me two years to get to the point where I was ready to start putting up chapters. I called it The Fun Trip. The plan was to release two chapters a week, and around the time I put up number 14, I learned that Tracey K (yay!) at Disney Hyperion was interested in it as a YA novel, so I stopped work on the interactive book and started turning it back into a print book. This was a great relief because the website was a huge amount of work, and my wife was a few weeks out from giving birth to our daughter. The Fun Trip remains online as basically an earlier, rougher, animated draft of The End of Fun—and you’re interested, you can find it at supermagicfuntrip.com.

It was a pretty long road. Before The End of Fun I wrote a collection of short stories and a novel and some children’s picture books, and they were all rejected in one form or another. There was also a collection of essays about being dead. And some other false starts. I’ve been doing this stuff since I was a kid.

So I was tenacious, but at a certain point it began to feel a lot like I was one of those wasps that’s trapped indoors and just keeps banging its head against the same windowpane and can’t figure out how to get outside. The way the story was told to me, the wasp eventually realizes that all it has to do is fly in a different direction to a different window or door or whatever, but in my case I just finally decided to stop banging my head. One day I was like, “Screw it. Forget the outside. I’ll just do my thing here.” About the time I started thinking that way, someone came along and opened the window.

In a way we’re all in this together, but in another way everyone’s on their own trip, and so a lot of the answers can be found in your own heart.

I’m learning to play the piano. FUN®—the latest in augmented reality—is fun but it’s also frustrating, glitchy and dangerously addictive . Just when everyone else is getting on, seventeen-year-old Aaron O’Faolain wants off.

But first, he has to complete his Application for Termination, and in order to do that he has to deal with his History—not to mention the present, including his grandfather’s suicide and a series of clues that may (or may not) lead to buried treasure. As he attempts to unravel the mystery, Aaron is sidetracked again . . . and again. Shadowed by his virtual “best friend” Homie, Aaron struggles with love, loss, dog bites, werewolf pills, community theater, wild horses, wildfires and the fact (deep breath) that actual reality can sometimes surprise you.

Sean McGinty’s strikingly profound and laugh-out-loud funny debut unearths a world that is eerily familiar, yet utterly original. Discover what it means to come to the end of fun.

Sean McGinty is a graduate of the Iowa Writers' Workshop. He has worked as a newspaper reporter, farmer, and English instructor. He lives in Portland, Oregon, where he teaches reading and writing. The End of Fun is his debut novel.

--
Have you had a chance to read THE END OF FUN yet? Do you feel afraid to finish a book because you don't want to see it rejected? Do you ever feel like a wasp continually banging its head on the same windowpane? Share your thoughts about the interview in the comments!