Robin Reul, author of MY KIND OF CRAZY, on comparison being the thief of joy

We're delighted to have Robin Reul here to chat about her debut novel MY KIND OF CRAZY.

Robin, what was your inspiration for writing MY KIND OF CRAZY? 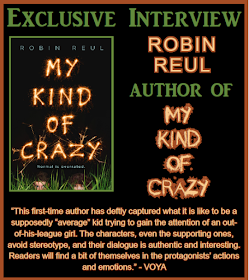 I had a story I’d long carried in my heart about grief and loss and friendships that can help carry you when you cannot carry yourself. I just never knew quite how to tell it. I’d come to understand through the years that things that happen to us are only a piece of our story, not our whole story, which is often so difficult to comprehend when one is a teenager and every little setback can feel like the end of the world. Sometimes, when we see the spark of light in the depth of someone else’s darkness, that spark has a chance to take hold and grow, and it can change, if not save someone’s life.

That story finally found a voice in Hank and Peyton. I wanted it to be funny, even though it was dealing with some serious topics, so I knew their worlds had to collide in a way that made them both vulnerable from the start. That’s when I came up with the idea of this can’t-catch-a-break kid nearly setting a girl’s lawn on fire in a failed Promposal. I took it a step further by considering what might happen if it turns out he had a witness, and she happens to be a budding pyromaniac who thinks she’s just found a kindred spirit.

I can’t reveal too much about it without it being a major spoiler alert but I will say that the scene where the truth about Peyton is finally revealed was truly gut-wrenching to write, as was Hank’s reaction. By that point in the story, I was so emotionally invested in these characters and they were so much a part of me that to write something that could threaten to tear them apart was absolutely awful. It had to be done very delicately and with great sensitivity, and I feel proud of the way it turned out, though I went through a lot of Kleenex to get there. It’s not my favorite scene, however. I think that would have to be when Hank sneaks into the strip club where Monica works dressed as a DJ. I had a lot of fun writing that one. I remember the last words I’d written the evening prior were “And then I came up with a plan so crazy it just might work” without having any idea of what that was going to be and left it as my jumping off point for the following morning.

I think readers who really love character driven stories about life-changing friendships and the power of human connections to bring us back to life in the wake of grief, loss and crippling self-doubt would gravitate towards characters like Hank and Peyton and Nick. I think it would be perfect for fans of books like THE SPECTACULAR NOW by Tim Tharp, ALL THE BRIGHT PLACES by Jennifer Niven, SWEETHEARTS by Sara Zarr, ELEANOR AND PARK by Rainbow Rowell, and THE PERKS OF BEING A WALLFLOWER by Stephen Chbosky.

How long did you work on MY KIND OF CRAZY?

The initial creation of MY KIND OF CRAZY took about nine months, and then I worked with my agent to revise it further before sending it out to editors. Once Sourcebooks acquired it, it went through additional edits that took several months. Altogether, the time from when I started writing it to when it will finally make it to a bookstore shelf is around seventeen months.

I learned SO much about writing during this process. First of all, I was fortunate enough to work with an incredible editor who loved this story and knew these characters as well as I did. She pushed me to think deeper on every level, to show not tell, to really let the reader get inside the characters' emotions. Every scene counts, and if it doesn’t further the plot or the character in some way, then it shouldn’t be there, because you never want to give the reader a window where they feel like they can put that book down.

The process as a whole taught me about patience (or my lack of it). Despite the fact that people say you shouldn’t take rejection personally, it’s impossible, in my opinion. A book is the creative expression of the author, and it is a piece of their heart. When someone tells you they don’t like your book it’s like saying “Boy, is your baby UGLY!” The key is to stop seeking external validation and to believe in one’s self. It’s a work-in-progress for sure, and some days it’s easier to remember than others.

What do you hope readers will take away from MY KIND OF CRAZY?

Never underestimate the impact you may have on someone else’s life, and never let anyone else determine your self-worth.

I have been writing my entire life, but really started concentrating on it full-time in the last six years. I started attending writing conferences and workshops as I started working on my first novel. That book garnered me an agent and it went on submission, but alas, it did not sell. At the time, the marketplace was not really looking for YA contemporary, particularly with a male protagonist, but I tried not to get discouraged and kept writing. I wrote another book that wasn’t quite ready for prime-time and was supposed to be revising it when I wrote MY KIND OF CRAZY instead, which is my third novel. So I guess there’s truth to the saying “The third time’s a charm.”

I write best if I get started early in the morning, so my writing day usually starts around 6:30/7 when my daughter leaves for school. I prefer to work in silence rather than with music, and I enjoy writing at home on my desktop computer vs. in a coffee shop on a laptop. However, I always make a playlist for whatever project I am working on and I listen to it when I’m driving in my car or late at night with headphones. The music helps the ideas percolate in my brain, and often helps me visualize the events of a scene unfolding as if it were a movie.

Comparison is the thief of joy. If you buy into someone else’s journey, or the highlight reel of their career that they share on social media, you will always feel less than. Everyone’s journey is different, and there are no shortcuts, only hard work. There will be incredible highs and devastating lows, and you must keep to the course. You must never settle in and believe you know everything, because there is always room to improve your craft. And above all, be kind. Always pay forward what you have learned and be professional. It’s not a race, nor a contest. The key is in staying the course.

I am currently at work on a new project, as I have another book that will be coming out with Sourcebooks, but I can’t really say much about it yet beyond that it will be another stand alone contemporary YA with humor and heart. :) Despite the best of intentions, seventeen-year old, wisecracking Hank Kirby can’t quite seem to catch a break. It’s not that he means to screw things up all the time, it just happens. A lot. Case in point: his attempt to ask out the girl he likes literally goes up in flames when he spells “Prom” in sparklers on her lawn…and nearly burns down her house.

As if that wasn’t bad enough, Peyton Breedlove, a brooding loner and budding pyromaniac, witnesses the whole thing. Much to Hank’s dismay, Peyton takes an interest in him—and his “work.” The two are thrust into an unusual friendship, but their boundaries are tested when Hank learns that Peyton is hiding some dark secrets, secrets that may change everything he thought he knew about Peyton.

Robin Reul has been writing since she was in early elementary school, when she used to make her own book club flyers for her classmates and then pen them original stories. Though she grew up on movie sets and worked for many years in the film and television industry both as an actress and in motion picture development, she ultimately decided to focus her attention on writing young adult novels. She likes to write the same kinds of stories she loved as a teen: the ones that give her with butterflies in her stomach and are filled with quirky, memorable characters who stay with the reader long after the story ends. When she’s not writing, Robin can be found singlehandedly driving up the profit margin of her local Starbucks and indulging her love of baked goods, particularly those in the key of pumpkin. She lives in Los Angeles suburbia with her husband, son and daughter.

Have you had a chance to read MY KIND OF CRAZY yet? Do you let the reader get inside the characters' emotions? Are you able to stop seeking external validation and believe in yourself? Share your thoughts about the interview in the comments!