On Writing YA - Reflecting the Emotional Age of the Reader, by Jane Dougherty

I have the true pleasure of welcoming author Jane Dougherty to AYAP today. Jane is a word artist of tremendous skill and emotion. I don't usually like my books gritty, but I do when she writes them. And believe me, Jane doesn't hold back her punches. She takes her readers where some authors fear to go...and ensures they feel everything her characters experience.

Jane's here today to muse on the unique blend of expectations that make up the YA reader and what distinguishes how we write for them as contrasted to children or adults. She's also celebrating her newest release, Abomination. It's .gif cover is one of the coolest I've ever seen. Be sure to check it out below. Welcome Jane!


What exactly is YA fiction, and what makes it attractive to a writer? by Jane Dougherty


There’s so much in those two little questions! First, what exactly does YA mean? To my mind there are children, there are adults, and in between there are young people who have the reading age and the emotional capacity of adults but who are not yet in the adult world of career, consumer credits and permanent relationships.

When I talk about YA, I mean exactly that—young people with an adult outlook who happen to be still in the school system. All young people reach an age when their interests change from being purely family and friends oriented to being much more centred on their emotional and physical development, and they become far more conscious of the world opening up around them. That world is no longer peopled with fluffy animals, loving, helpful adults and best friends for life. It is the same world their parents inhabit, with the same problems and unpleasant underbelly, even though some aspects will only be experienced at second hand. It’s quite a well-documented phenomenon—it’s called growing up. 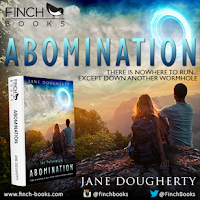 Literature reflects this change in several ways. Children’s books are short, they avoid ambiguity, shades of grey, they have a happy ending, and they depict a world where children are in control, heroic and responsible. Young adult books explore those shades of grey, the ambiguities and questioning, and there are no more happy endings than there are in real life. A children’s novel can tackle subjects like divorce and bullying, death, and serious illness, but a children’s author writing about family breakdown would keep it low key, concentrating on the silences at meal times, impressions of sadness, guilt maybe, raised voices overheard, the knowledge that something was terribly wrong but on the periphery of the child’s experience. A young adult writer would also be writing from the young person’s point of view, but would be able to talk about physical abuse, drunken, violent behaviour, assault, rape, on the understanding that young adults are developing adult reactions and emotions and the maturity to cope with them. Their perspective is no longer that of a child. They understand so much more of the reasons for socially outlawed behaviour, and they also understand the consequences. Essentially, the treatment of any ‘difficult’ subject should reflect the emotional age of the reader.

So, what’s the difference between writing for young adults and for old, hard-bitten adults? Again, I think it’s the perspective that changes rather than the subject matter. A good YA novel should use the same emotional range as an adult novel, use the same language and expect the same effort of its readers. But the points of reference should be familiar, and the reader should be able to empathize with the characters and believe that what is happening to them is credible. It’s a mark of children’s stories for the hero/heroine to be smarter, stronger, more assertive and more ‘heroic’ than the adults. But it’s not real life. A YA hero has to be believable, real. The rest is the icing on the cake. He/she can be hot, sexy, romantic, funny, endearing, clumsy, or joky, feisty, sensitive, moody, complex, screwed up or level-headed. It’s up to the author what kind of story she writes, posing exactly the same questions and expecting the same sort of answers as she would if it was a story for adults.

I’m not advocating graphic descriptions of violence or abuse that many an adult might find disturbing. The aim of the game isn’t to shock. But I don't think that these subjects are taboo. We all need to push back the boundaries, whatever our age. Simply because a subject is uncomfortable doesn’t mean it must never be discussed, but always with the proviso that it is done within the context of the experience of the readership for whom the book is intended.

Think Madame Bovary set in a boring small town while Emma is still at school, War and Peace told entirely from Natasha’s point of view, The Red Badge of Courage from a boy soldier’s point of view, a Narnia story in which Susan, instead of being written out of the script because she discovers boys, makeup and relationships takes over her role as mature young woman and tells that sanctimonious lion to get a life and stop being so censorious. Get the idea?

This isn’t everyone’s view. Ask a parent who likes to monitor their young adults’ reading matter what they expect from a YA novel, and they may well give you a list of things it shouldn’t have in it, like bad language, sex, and violence. In reply to this argument I would say: teenagers swear like troopers; in western cultures, the average age of first sexual intercourse is 17; and do I really have to mention TV news bulletins and ‘gun culture’?

Teenagers who find the real world offensive are not yet young adults. They will be happier reading books with happy endings where the child hero always wins and the bad things that happen turn out to be bad dreams. The rest could probably teach most of us seniors a few things about sex, drugs and rock and roll.

I like to think of myself as a serious writer. Not exactly a household name (yet) but I take my craft very seriously. Writing with main characters who are in their late teens gives me great flexibility in what they can get up to. Older people have commitments, jobs, tangled relationships, all sorts of professional, financial and health worries, babies, aging parents, and a complex day-to-day existence. Teenagers who are still going through school don’t have all that baggage. They are still learning, experimenting and having a good time. But as well as being fairly footloose and fancy free, they express themselves as adults, share the same emotions as adults, and expect to be treated as adults.

Writing for YA, I get the best of both worlds. I can have my main characters going through the mill emotionally and physically without worrying about cardiac arrest or who’s going to pick up the kids from the child minder. They are more likely to throw themselves into relationships for the fun of it without asking questions like: do I really want him to be the father of my children? Teenagers tend to be more open-minded that older adults and more idealistic. It’s easier to imagine an eighteen-year-old leading a revolution than someone with a partner, babies and aging parents to care for. And they know how to have fun. They don’t hold back because they’re worried about not being dressed properly, afraid of meeting the boss, or waking up with a hangover. They just do it.

So, yes, writing for YA is serious stuff, but it’s also full of tenderness, high idealism, and loads of fun.

As the end of the world begins, Carla and Tully hurtle through a wormhole five years forward in time­—to find they haven’t missed the Apocalypse after all.

Carla and Tully are picnicking in the quad of their international high school in central Paris when the end of the world begins. They are sucked into a wormhole that spits them out five years later to find that the world is a freezing desolation but still hanging on, waiting for something even worse to finish it off…the something worse turns out to be the Burnt Man and his horsemen.

Taken prisoner by the Flay Tribe to their lair in the ruins of a shopping mall, Tully is forced to become a warrior, while Carla joins the other girls as a kitchen slave and comfort woman.

Tully might like the idea of playing soldiers, but Carla knows what is waiting for the girls when the food runs out, and it isn’t pleasant. The supermarket holy man’s vision of the return of the Burnt Man and his demon friends drags Tully back to reality—when the four fiends are reunited, the Apocalypse will really begin. Carla and Tully don’t plan on being there when that happens.

But in this post-Abomination world where only the young and brutal have survived, where food and fuel are running out, and the climate is plunging into another final ice age, there is nowhere to run—except down another wormhole, with no idea of what might be waiting for them at the other end. 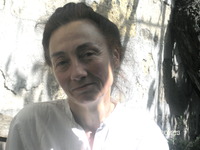 Jane Dougherty is a product of the Irish diaspora. She was brought up in Yorkshire and educated in Manchester and London before moving to France to work in the wine trade. She spent fourteen years in Paris where she married and had four children, studied Irish for a year and taught herself Italian. Next move was to Laon in Picardy, a medieval gem of a town set in beautiful countryside, where her fifth child was born. She now lives in Bordeaux with her family, a Spanish greyhound and a posse of cats.