Meredith Moore, author of FIONA, on finding the way to write that works best for you

We're pleased to have Meredith Moore drop by to give us the scoop on her latest novel FIONA.

Meredith, what was your inspiration for writing FIONA? 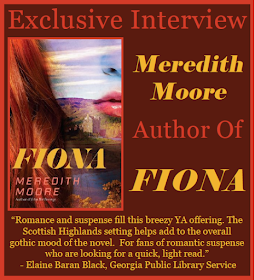 I grew up reading nineteenth-century British novels, the novels that my mom loved and passed down to me. A lot of FIONA inspiration came from THE TURN OF THE SCREW by Henry James and JANE EYRE by Charlotte Bronte (one of my favorite books ever). But it also came from Scotland itself—I wandered around the Highlands and islands for two weeks on my own one September and went to as many castles and small towns as I could. There’s something about the beauty and the legends and the haunting chill in the air that make that landscape the perfect place to find inspiration.

When I’m drafting a novel, I give myself a daily word count goal: usually 3,000 words a day. If I go to a coffee shop, where I’m surrounded by people who are peer-pressuring me to appear productive, I can write that in about three hours. If I stay at home, where I’m distracted by Twitter and Netflix (hello, THE WALKING DEAD) and the never-ending laundry pile, it can take me until midnight. But either way, I need insane amounts of coffee and a good playlist.

There’s no right way to write: you have to find the way that works best for you. And write the book that makes you excited to wake up in the morning and work on it. But most importantly, never ever ever give up. You’re writing because you love to do it, because you NEED to do it, because this is how you express yourself. Keep going. Fiona, an independent loner with wild red hair, leaves her fractured home in Texas for a brand-new life in the Scottish Highlands to be the au pair for Poppy Mackenzie, the young daughter of her mother’s recently deceased childhood friends. Fee, as she’s called, is thrilled to be free of her less-than-ideal home life. But there’s another motive driving her eagerness to flee to the Highlands: the desire to reconnect with her mother, who succumbed to suicide after a long battle with schizophrenia when Fiona was only twelve, leaving her to live with distant relatives of her absentee father.

Fee doesn’t have much time to settle into her new home—a castle maintained by the Mackenzie family fortune—before a series of strange events starts to make her question her sanity. As the attacks on her mental health become more and more intense, Fee finds herself both the pawn and the target in a ruthless, greed-driven plot with roots that go all the way back to her mother. Alone and friendless in a foreign country and half-convinced she’s losing her mind—just like her mother—Fee must rely on her wits and her street smarts to save not only herself but also the lives of her newfound Scottish family.

Meredith Moore graduated from Harvard University with a degree in History, focusing on early modern England and France. She lives in Houston, Texas, where she loves pumpkin spice lattes, 19th century British literature, and road trips. I Am Her Revenge is her debut novel.
--

Have you had a chance to read FIONA yet? Has a setting inspired you to write a novel? Are you writing because you need to do it? Share your thoughts about the interview in the comments!