Meghan Rogers, author of CROSSING THE LINE, on enjoying your process

We're excited to have Meghan Rogers with us to share more about her debut novel CROSSING THE LINE. 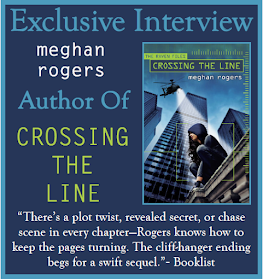 Meghan, how long did you work on CROSSING THE LINE?

I first started thinking about this book in May of 2012, so from conception to publication it took about four years. But if we’re talking how much time did the actual work take, I would say about a year and a half. I worked on the project for a year by myself, and then once it sold there was another six months of work with my editor.

I started writing with a goal of publication in the spring of 2004. I was fifteen and a freshman in high school. I finished my first book just before I graduated high school, wrote my second one in college (both of which I queried unsuccessfully), and then wrote a third as my thesis project for my MFA, which I’m actually still working on. I started writing Crossing the Line the summer after I graduated from my MFA program. Technically, it was ten years from when I first started writing seriously to my first sale and twelve years before my first book hit the shelves. So, I guess that’s kind of a long road, but since I started young, it never really felt that way. I was learning a lot during this time and I knew I was getting better. I wouldn’t say the journey was hard. There were definitely aspects that were challenging, but in a good way. Hard, to me, implies that it wasn’t fun, and I’ve honestly had a blast learning, improving, and growing as a writer over these past twelve years.

Remember that there is no such thing as the ‘right’ way to write. Try different techniques and approaches. Take the time to figure out a process that works best for you. If you’re enjoying your process and you’re happy with what you’re creating, don’t let anyone tell you that you’re doing it wrong. Jocelyn Steely was kidnapped as a child and raised in North Korea as a spy. When her agency sends her to the U.S. to infiltrate the very group her parents once worked for, Jocelyn jumps at the chance to turn double agent and finish off her kidnappers once and for all. She convinces the head of the American spy agency to trust her, but it’s not quite as simple as that: Jocelyn has to fight the withdrawal symptoms from the drug that the North Koreans used to keep her in line, and her new fellow spies refuse to trust their former adversary. Worst of all, there might be some new information to uncover about her parents - if she even wants to find out.

Meghan Rogers has been telling stories since she could talk and writing creatively since she was first introduced to the concept in third grade. She holds an MFA in Creative Writing from Rosemont College. She lives in Morton, PA.

Have you had a chance to read CROSSING THE LINE yet? Do you have fun while learning, improving, and growing as a writer? Have you found the process that works best for you? Share your thoughts about the interview in the comments!