Martyn Bedford, author of TWENTY QUESTIONS FOR GLORIA, on 95% of everything you learn about writing comes from doing

We're delighted to have Martyn Bedford here to share more about his latest novel TWENTY QUESTIONS FOR GLORIA.

Martyn, what was your inspiration for writing TWENTY QUESTIONS FOR GLORIA? 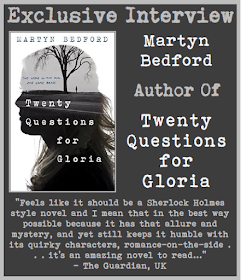 For all three of my YA novels, the inspiration has come from my own experience of being a teenager – way back in the days when mammoths still roamed the land. Twenty Questions for Gloria arose out of my recollection of being 15 years old and wishing to leave childhood behind and be more independent, more adventurous, more free-spirited . . . but feeling frustrated by all of the restrictions you face as an adolescent. Teachers and parents rule your lives to a large extent, at a time when you want to push the boundaries and discover your own capabilities and limitations. There’s a whole world – a whole future – out there, just beyond your grasp. That’s Gloria’s situation in this novel. Through her, I got the chance to go off on the kind adventure I’d always wanted to, at her age, but never had the courage or audacity to do.

A review in the American School Library Journal compared Twenty Questions for Gloria to Eleanor & Park, by Rainbow Rowell – a comparison which I was very pleased with (and flattered by), because I loved that novel. Both stories are centred on a troubled romance between two misfits, so I guess there is a similarity that would appeal to readers who like love’s journey to be a bumpy ride with dark edges.

What do you hope readers will take away from TWENTY QUESTIONS FOR GLORIA?

At first, and for a long time, Gloria sees Uman as the catalyst for change in her life, without realising that the real catalyst for change is inside her. Sometimes we need someone, or something, to ignite the spark within us and Uman is that spark for her. But I very much didn’t want this to be a clichéd tale about a girl who needs a boy to solve her problems. Gloria’s ‘journey’ is that Uman jolts her out of a rut but, with or without him, she has to find her own way forward from there. So, if the novel has a message, it’s this: Learn how to be the hero/heroine of your own story.

I’d dabbled with writing fiction since my teens but started writing seriously in my mid-20s. Over the next seven years, I wrote two full-length novels for adults, neither of which got published – I received around 40 rejection letters. Then, in my early 30s, I took a masters degree in Creative Writing at university, where I started working on my third novel, called Acts of Revision. It became my first published book, although even this one was turned down by four of the five literary agents I sent it to, and five of the seven publishers who my agent pitched it to. But, at the age of 36, I was finally a published novelist! I wrote four more novels for adults before turning to writing for teenagers. The agent for my adult novels doesn’t handle young adult fiction but a colleague in the same agency does, so he passed my first YA novel, Flip, to her . . . and, luckily, she really liked it. That novel went to auction, with seven UK publishers and four U.S. publishers bidding for it.

On a regular writing day, I’ll go to a coffee shop in the morning – from around 9am to 1pm – and write, by hand, on a notepad. Then I’ll head home, clear up the mess my oldest daughter and her friends have made of the kitchen, have my lunch, and spend the afternoon typing up the morning’s work on a laptop at a desk in the corner of my attic-conversion bedroom. I round the day off with a long walk. I never listen to music while I’m writing, because I find it too distracting, and yet – oddly – the noise and bustle of a coffee shop (and the background muzak) don’t bother me at all. Somehow, I manage to zone it out.

Write as much as you can, as regularly as you can. And rewrite, rewrite, rewrite. It’s fine to join a writing group or an online forum, or take writing classes, or receive feedback on your work-in-progress, or read how-to books on writing, but 95% of everything you learn about writing will come from doing it. There are no shortcuts.

I’ve almost completed the second draft of another YA novel, provisionally titled Our Time to Sing, which is about a school trip abroad that goes horribly wrong and is narrated from the alternating viewpoints of the four main teenage characters. I’m also putting the finishing touches to a solo collection of short stories for adults, due for publication later this year. At 15, Gloria longs for adventure, something beyond her ordinary suburban life. When a mysterious new boy strolls into school, bent on breaking all the rules, Gloria is ready to fall under his spell.

Uman is funny, confident, and smart. He does what he wants without a care for what anyone thinks. The only people for him, he says, are the mad ones, the ones who never yawn or say a commonplace thing but burn, burn, burn.

He is everything Gloria wants to be. He can whisk her away and show her a more daring, more exciting life in which the only limits are the boundaries of her own boldness. But Uman is not all he seems. And by the time she learns the truth about him, she’s a long way from home . . . and the whole country wants to know: Where’s Gloria?

For fans of Dreamland by Sarah Dessen, Stolen by Lucy Christopher, and the Mara Dyer books by Michelle Hodkin.

Martyn Bedford is the author of five novels for adults: Acts of Revision (Transworld 1996), winner of the Yorkshire Post Best First Work Award; Exit, Orange & Red (Transworld 1997); The Houdini Girl (Penguin 1999); Black Cat (Penguin 2000); and The Island of Lost Souls (Bloomsbury 2006). Between them, his novels have been translated into 12 languages.

His award-winning debut novel for teenagers and young adults, Flip, was published in 2011 by Walker Books in the UK and by Wendy Lamb Books (an imprint of Random House) in the U.S. It was also published in Canada and, in translation, in Germany, Italy, Thailand, the Netherlands and Russia. His second teen/YA novel, Never Ending, was published on both sides of the Atlantic in 2014.

Martyn has also had numerous short stories published in anthologies, newspapers and magazines and broadcast on radio and the Internet. One story, Letters Home (Leeds Stories, Comma Press 2006), has been made into a short film, premiering at the 2009 Version Film Festival, at the Cornerhouse, in Manchester.

Martyn is a graduate of the MA in Creative Writing at the University of East Anglia, where he studied under Malcolm Bradbury and Rose Tremain. He is a senior associate lecturer in creative writing at Leeds Trinity University College and has previously taught at Manchester, Leeds and Leeds Metropolitan universities, as well as an academic writing residency at Leeds Trinity as a Royal Literary Fund Fellow.

His creative-writing teaching also includes school groups and residential courses for the Arvon Foundation and he was a founding consultant and critic-in-residence for the online writing forum YouWriteOn.com.

He was a fiction critic for the Literary Review (2000–2009) and previously reviewed for the New Statesman. Before becoming a writer and teacher, Martyn worked for thirteen years as a journalist in regional newspapers all over the UK.

Martyn was born and grew up in Croydon, south London, but has lived for many years in Ilkley, West Yorkshire, with his wife and two daughters.

--
Have you had a chance to read TWENTY QUESTIONS FOR GLORIA yet? Do you draw from your own experience as a teenager when writing YA? Do you write as much as you can, as regularly as you can? Share your thoughts about the interview in the comments!