Mariko Tamaki, author of SAVING MONTGOMERY SOLE, on talking to yourself

We're excited to have Mariko Tamaki with us to share more about her latest novel SAVING MONTGOMERY SOLE. 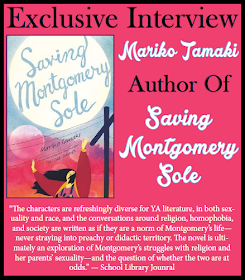 Mariko, what was your inspiration for writing SAVING MONTGOMERY SOLE?

This past couple years, I've really felt like celebrating nerds. Because I was a huge nerd in high school and the moment I realized that was a good thing was a huge game changer for me.

So, on the one hand, this book is inspired by my love of geeks of all ages, by the joys of geeking out on something. About what it's like to love something no one else gives a crap about. The specific inspiration for Monty's geek outs in the book are a mix of my obsessions. I was super into Wicca in high school, which later morphed into an obsession with the X-Files, which has now transformed into an obsession with random internet searches, documentaries (of all kinds) and many other woo woo finds discovered with my ever expanding posse of woo woo sisters. I have long wanted a place to write in my fascination with trepanation (which I've had since grade 9) and now I've done it.

At the same time, SMS is definitely inspired by the work I did as part of the LGBTQ Parenting Network in Toronto, working with queer families, wanting to celebrate and talk about queer families (some of my favorite families) and also look at what it means to be part of a family that is discriminated against.


How long did you work on SAVING MONTGOMERY SOLE?

I worked on SMS for a little more than two years, which is a long time to work on a book when you've just come off working on Graphic Novels (where the writing portion is considerably lighter). A lot of the writing of this book involved working with my amazing editors Connie Hsu and Lynne Missen, who have been my voices of reason and my rocks throughout this process.

I am an almost full time writer now, so my schedule varies wildly. I tend to work at home and at a series of coffee shops where the vibe is good and there's AC outlets a plenty. I usually create a few mixes that suit the varying moods of what I'm writing, although I can only really listen to them in the later writing stages because otherwise it's distracting. I also spend a considerable amount of time outlining a book on paper before I start writing, which I find helps me clarify things before I get into the woods. Lastly I highly recommend talking to yourself as a way to hash out book stuff. I do it all the time. I think if more people did it it would make me seem less weird. Montgomery Sole is a square peg in a small town, forced to go to a school full of jocks and girls who don't even know what irony is. It would all be impossible if it weren't for her best friends, Thomas and Naoki. The three are also the only members of Jefferson High's Mystery Club, dedicated to exploring the weird and unexplained, from ESP and astrology to super powers and mysterious objects.

Then there's the Eye of Know, the possibly powerful crystal amulet Monty bought online. Will it help her predict the future or fight back against the ignorant jerks who make fun of Thomas for being gay or Monty for having two moms? Maybe the Eye is here just in time, because the newest resident of their small town is scarier than mothmen, poltergeists, or, you know, gym.

Thoughtful, funny, and painfully honest, Montgomery Sole is someone you'll want to laugh and cry with over a big cup of frozen yogurt with extra toppings.

Mariko Tamaki is a Toronto writer, playwright, activist and performer. She works and performs with fat activists Pretty Porky and Pissed Off and the theatre troupe TOA, whose recent play, A vs. B, was staged at the 2004 Rhubarb Festival at Buddies in Bad Times Theatre. Her well-received novel, Cover Me (McGilligan Books) was followed by a short fiction collection, True Lies: The Book of Bad Advice (Women's Press). Mariko's third book, FAKE ID, is due out in spring 2005.

Mariko Tamaki has performed her work across Canada and through the States, recently appearing at the Calgary Folkfest 2004, Vancouver Writer's Festival 2003, Spatial III, and the Perpetual Motion/Girls Bite Back Tour, which circled though Ottawa, Montreal, Brooklyn and Chicago. She has appeared widely on radio and television including First Person Singular on CBC radio and Imprint on TVO. Mariko Tamaki is currently attending York University working a Masters degree in Women's Studies.

Have you had a chance to read SAVING MONTGOMERY SOLE yet? Do you outline a book on paper first? Do you talk to yourself to hash out book stuff? Share your thoughts about the interview in the comments!