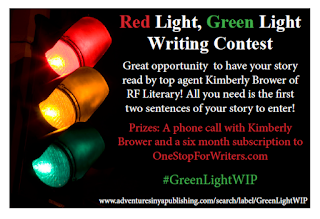 We've got another agent-judged Red Light, Green Light WIP contest starting on Thursday here at AYAP, so I know a lot of you are frantically working on getting your openings and pitches ready to go. In addition to a chance to win a 30-minute phone call with an agent, the winner will also get a free six-month subscription to the amazing One Stop For Writers site loaded with resources for established and emerging authors alike!

To get you ready to go, I've got agent Kimberly Brower of the Rebecca Friedman Literary Agency here to give us some thoughts on the contest and what she'll be looking for. But that's not all. Keep reading for great advice from Avalon Jaedra, Entangled Editor and the guru behind the popular Fixing the First Page feature over at Writability, and from #PitchWars founder Brenda Drake. I've also got a video of some my favorite authors, including Victoria Scott, Darren Shan, and Lisa Gail Green, reading their fave novel openings. Oh, and there's a giveaway of THE WINNER'S KISS and RED QUEEN, too.

Q. Kimberly Brower, what makes you excited to be the agent judge for the Red Light/ Green Light contest?

KB: I love interacting with people who are really taking a chance and putting themselves out there. It takes a lot of courage to enter into a contest like this, and I admire that. I’m excited to see what new and fresh ideas people have come up with.


Q. Kimberly Brower, do you think there's a formula for the perfect first sentence? Which elemtents do you look for?

KB: No I don’t think there’s a formula. I think your opening sentence/paragraph/chapter needs to intrigue the reader and really hook them. Make the reader want to keep reading.

Q. Kimberly Brower, do you have any advice for the writers entering the contest?

KB: Go big or go home. Don’t hold back and write what YOU want to write. Don’t worry about what you’ve read you should or shouldn’t do. Write your story.

I've admired Avalon Jaedra's writing posts for many years, and a while back she started doing a new feature on her Writability blog that analyzes the first page of a submitted manuscript and suggests ways the WIP could be improved. As the brains behind the Fixing the First Page feature, I asked her to give us a takeaway on the problems that she sees with regularity.

To enter the Red Light/Green Light contest, you only need the first two sentences of your manuscript or WIP, but as you make it through each round, you'll be asked to submit more. The agent judge will be looking at the entire first chapter for the top five entries, so contestants will want to keep working to make sure that's as strong as it can be.

Q. Ava Jae, what mistakes do you commonly see when people craft their opening pages?


I’ve done twenty-one fixing the first page critiques so far, and a cursory scroll through them made it really easy to hone in on the top three issues I most frequently mentioned. Openings are really tough and there’s a lot riding on them, but if you avoid these three mistakes you’ll be ahead of the curve.

There are few writers online who haven't heard of #PitchWars. Its founder, Brenda Drake, has created a contest that has launched the careers of many authors, so she sees a ton of pitches. Since Brenda is also a 1st5PagesWritingWorkshop.com graduate, and since her recent book, THIEF OF LIES, opens with a great mix of character, movement, and intriguing stakes, I thought I'd ask for her advice to anyone struggling with getting their entries ready for the Red Light, Green Light contest.

Q. Brenda Drake, what mistakes do you commonly see on pitches and story openings?

The most common mistakes I find in reading contest entries are pitches not clearly defining the stakes and manuscripts opening in the wrong place. Getting the stakes into your pitch is simple. All you have to do is answer the question: What does the main character stand to lose if he/she doesn't accomplish his/her goal(s)? With manuscripts opening in the wrong place, simply ask yourself: If I cut this scene, will the story suffer for it? There are so many manuscripts that open with a dream sequence, an accident, in a classroom, and other overused situations that turn off agents/editors. Give your reader an interesting and unique opening - the "slice of life" - show us your character in their normal world before something horrible happens and a door closes on them and they have no choice but to continue their journey. The opening scene has to be "in action" not "action," so don't start off with a car chase without introducing us to your character, to the person whose head we will be in for the duration of the story. Make the scene interesting and use it to reveal to the reader something special about your character. If it doesn't reveal character or set-up the story, it's not needed.

Some Fantastic YA Opening Sentence Examples

Need some inspiration? Here are some fantastic opening sentences read by some of my favorite authors.


Another novel with a brilliant opening is Marie Rutkoski's THE WINNER'S KISS, so I've got a giveaway of that for you, together with a copy of RED QUEEN. : ) Fill out the Rafflecopter to enter!

War has begun. Arin is in the thick of it, with the East as his ally and the empire as his enemy. He’s finally managed to dismiss the memory of Kestrel, even if he can’t quite forget her. Kestrel turned into someone he could no longer recognize: someone who cared more for the empire than for the lives of innocent people—and certainly more than she cared for him. At least, that’s what he thinks.

But far north lies a work camp where Kestrel is a prisoner. Can she manage to escape before she loses herself? As the war intensifies, both Kestrel and Arin discover unexpected roles in battle, terrible secrets, and a fragile hope. The world is changing. The East is pitted against the West, and Kestrel and Arin are caught between. In a game like this, can anybody really win? Graceling meets The Selection in debut novelist Victoria Aveyard's sweeping tale of seventeen-year-old Mare, a common girl whose once-latent magical power draws her into the dangerous intrigue of the king's palace. Will her power save her or condemn her?

Mare Barrow's world is divided by blood--those with common, Red blood serve the Silver- blooded elite, who are gifted with superhuman abilities. Mare is a Red, scraping by as a thief in a poor, rural village, until a twist of fate throws her in front of the Silver court. Before the king, princes, and all the nobles, she discovers she has an ability of her own.

To cover up this impossibility, the king forces her to play the role of a lost Silver princess and betroths her to one of his own sons. As Mare is drawn further into the Silver world, she risks everything and uses her new position to help the Scarlet Guard--a growing Red rebellion--even as her heart tugs her in an impossible direction. One wrong move can lead to her death, but in the dangerous game she plays, the only certainty is betrayal.