Jodi Meadows, author of THE MIRROR KING, on learning to trust your instincts

THE MIRROR KING is book two in the Orphan Queen duology, and we're excited to have Jodi Meadows here to chat about it. 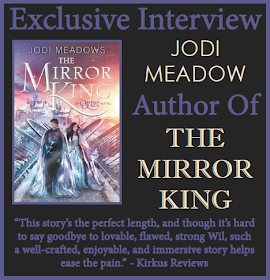 Jodi, what was your inspiration for writing THE MIRROR KING?

THE MIRROR KING is the sequel to THE ORPHAN QUEEN. Even though they are two books, they're one whole story.

The story came with an image of a girl rescuing a boy from her people. A mistake, probably, but I knew even then that she had strong morals and felt she was doing the right thing. Fast forward ten years and everything that started that night is finally coming to a head.

It'd be a spoiler to give exact scenes, but basically the entire climax was a huge challenge for me -- both emotionally and trying to get the story on paper in a way that makes sense to people who don't live in my brain.

CJ Redwine and I share a lot of readers, so I 100% recommend her Defiance series and THE SHADOW QUEEN to people who like my books. (When my mom read Defiance, she thought she was reading one of my books. CJ and I are Brain Twins.)

How long did you work on THE MIRROR KING?

Ohhh there were so many lessons in The Mirror King for me. Mostly they revolve around how difficult this book was to write, but how this turned out to be one of the best books I've ever written. It's certainly one I'm very, very proud of! Through all that, I learned (again) to trust my instinct. If something feels off about the book, something probably is. And even if I want to hurry up and finish the draft, I really need to pause and listen to the story -- figure out what is causing the feeling, rather than just plowing forward.

What do you hope readers will take away from THE MIRROR KING?

This is difficult to say, because I can't predict what every reader will take out of the book! But I do hope they see the themes of responsibility, of standing up for oneself, and for trying to do what is right, no matter the cost.

THE MIRROR KING is actually my fifth published novel. I did write a couple of manuscripts in between my published books that haven't been published. Before that, I wrote sixteen manuscripts. INCARNATE, my first novel, was the seventeenth story I'd written.

With THE MIRROR KING specifically, yes. The book was already contracted, but I was having a hard time writing it. Almost nine months after I started drafting the book, I realized that one of the reasons I'd been having so much difficulty was because I was trying to squish a big story into too few words. Once I gave myself the freedom to let the book be huge, everything really fell into place.

I try not to have rituals. What if I found myself needing to write with a candle lit, but I also needed to write on an airplane to meet a deadline? I wouldn't want that candle to be my excuse.

I'm working on another book with the Lady Janies - Brodi Ashton, Cynthia Hand, and me. Not a sequel to MY LADY JANE, but another book, definitely. And I'm working on my next solo book, which will be out in Fall 2017. It's a fantasy. There's dragons. Wilhelmina has a hundred enemies.

HER FRIENDS HAVE TURNED. After her identity is revealed during the Inundation, Princess Wilhelmina is kept prisoner by the Indigo Kingdom, with the Ospreys lost somewhere in the devastated city. When the Ospreys’ leader emerges at the worst possible moment, leaving Wil’s biggest ally on his deathbed, she must become Black Knife to set things right.

HER MAGIC IS UNCONTROLLABLE. Wil’s power is to animate, not to give true life, but in the wraithland she commanded a cloud of wraith mist to save herself, and later ordered it solid. Now there is a living boy made of wraith—destructive and deadly, and willing to do anything for her.

HER HEART IS TORN. Though she’s ready for her crown, declaring herself queen means war. Caught between what she wants and what is right, Wilhelmina realizes the throne might not even matter. Everyone thought the wraith was years off, but already it’s destroying Indigo Kingdom villages. If she can’t protect both kingdoms, soon there won’t be a land to rule.

In this stunning conclusion to THE ORPHAN QUEEN, Jodi Meadows follows Wilhelmina’s breathtaking and brave journey from orphaned criminal on the streets to magic-wielding queen.

Jodi Meadows lives and writes in the Shenandoah Valley, Virginia, with her husband, a Kippy*, and an alarming number of ferrets. She is a confessed book addict, and has wanted to be a writer ever since she decided against becoming an astronaut. She is the author of the INCARNATE Trilogy and the ORPHAN QUEEN Duology (HarperCollins/Katherine Tegen), and a coauthor of the forthcoming MY LADY JANE (HarperTeen). Visit her at www.jodimeadows.com

Have you had a chance to read THE MIRROR KING yet? Do you pause to listen to your story? Have you ever tried to squish a big story into too few words? Share your thoughts about the interview in the comments!