Holly Jennings, author of ARENA, on writing the story you want to write

We're pleased to have Holly Jennings drop by to give us the scoop on her debut novel ARENA.

Holly, what was your inspiration for writing ARENA? 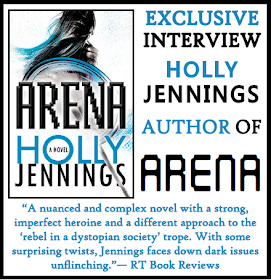 The idea for ARENA came to me when I was watching a documentary about professional gamers and reading a book called Neuromancer. For anyone who doesn’t know, Neuromancer was one of the definitive books of science fiction and explored the idea of plugging your consciousness into a virtual matrix. These two concepts got me thinking: what kind of a role would a pro gamer have in a future where virtual reality is the most prominent technology in society? My answer: They’d be the celebrities. They’d be the ones entertaining the masses through virtual gaming competitions. Now, that was way too cool not to write. As soon as I had the idea, I couldn't stop writing it down.

When I first started writing ARENA, the fight scenes were daunting. I'd never written a story that had such intense and detailed fights, so there was a lot to learn. There's this balance between describing enough so the reader knows what's going on, but not so much that it slows the pace down and makes the fight feel mechanical. It's a hard balance to find, and I spent a long time studying and working on those scenes. So I'm thrilled that one of the common comments I get about Arena is how much people liked the fights scene. It means so much, because it was one of the most difficult things to learn.

As for the scenes I'm most proud of, my favorite aspect of the book is the main character and how she changes throughout the course of the book, and the final scenes are where we really see what kind of person she’s become. Those would probably be my favorites.

Ready Player One seems to be the book people mention the most in comparison to ARENA because of the virtual gaming component. The Hunger Games and Divergent come up a lot, too. Two books coming out this year that would probably appeal to the same group of readers are The United States of Japan by Peter Tieryas and Bluescreen by Dan Wells.

How long did you work on ARENA?

About a year: a solid eight months of writing and editing, and four months of tweaking while I was searching for an agent.

One important thing I learned was to stop trying to write for other people and just write the book I’d want to read. So many times before ARENA, I’d sit at the computer and think: what will my friends/family think of this? What about industry people? Once I started writing ARENA, I cast that mindset aside and only focused on saying what I wanted to say. Suddenly, my writing was on fire. I was addicted to the story and couldn’t write it down fast enough.

What do you hope readers will take away from ARENA?

This is a tough question because everyone walks away from a book or movie with a different experience and each one is important. But I would be thrilled to hear that Arena inspired someone to start writing their own story. To spark creativity in someone else is a powerful thing.

I worked on a few novels before Arena, but most of them I didn't even finish. I'd get maybe a third of the way through the story and think, "Nah, not feeling it." I knew that if I could get a book published, I'd been working on it and promoting it for years, so I wanted to make sure it was a story I was deeply passionate about. So I had no qualms about abandoning a book before it was done if I knew it wasn't "the one."

Once I wrote ARENA, things moved very quickly. I started querying and entering contests in April 2014. By August I had an agent and by September I had an offer from the publisher. I've been told this is lightning fast and not usual in the industry. I didn't find the road particularly hard, but was much more involved than I thought. I spent nearly every night, weekend, and vacation day studying how to make it as a writer. I think that helped speed along the process. That, and a good agent and a lot of luck.

I still feel like I don't understand how to write novels, or even short stories. But if I ever had an AHA! moment it's when I learned to write the story I wanted to write, and not care what other people would think of it. If you do that, the process is so much more enjoyable, and you're much, much more likely to look forward to writing and actually finishing the book.

I write at home, usually in silence. Sometimes I put on music that matches the mood of the story, but that's rare. I'm a night person, and I find that's when I'm the most creative. Sometimes, I start little by little in the morning. As the day goes on, more and more of the scene forms in my mind, and this momentum starts to builds, so by the time the sun goes down, I'm pounding out hundreds or thousands of words in the dark.

I've said this a few times, but write the story you want to write. Yes, publishing is a business and it's good to be aware of trends. But once you make it, you'll be promoting your work for years. Make sure it's something you love.

Currently I’m working on Arena 2: The Untitled Sequel. Plus, I’ve got some ideas for a couple of new novels. I’m hoping to get some time to explore them between Arena 2 edits. A fast-paced and gripping near-future science fiction debut about the gritty world of competitive gaming...

Every week, Kali Ling fights to the death on national TV.
She’s died hundreds of times. And it never gets easier...

The RAGE tournaments—the Virtual Gaming League’s elite competition where the best gamers in the world compete in a no-holds-barred fight to the digital death. Every bloody kill is broadcast to millions. Every player is a modern gladiator—leading a life of ultimate fame, responsible only for entertaining the masses.

And though their weapons and armor are digital, the pain is real.

Chosen to be the first female captain in RAGE tournament history, Kali Ling is at the top of the world—until one of her teammates overdoses. Now, she must confront the truth about the tournament. Because it is much more than a game—and even in the real world, not everything is as it seems.

The VGL hides dark secrets. And the only way to change the rules is to fight from the inside...

Holly Jennings is a self-proclaimed nerd and lover of all things geeky and weird. As the firstborn to a sports enthusiast, it was soon discovered that the only games she'd ever learn to master involved consoles and controllers. Her childhood was spent crushing virtual foes, racing on simulated tracks, and rescuing digital princesses. As a young adult, she fell in love with English class, speculative novels, and comic books, which inspired her to create stories of her own. Eventually, her passions converged and she started writing about the future of video games.

Have you had a chance to read ARENA yet? Have you abandoned a novel because you weren't passionate enough about it? Are you writing the book you want to read? Share your thoughts about the interview in the comments!