Frances Hardinge, author of THE LIE TREE, on not being afraid of writing rubbish

We're thrilled to have Frances Hardinge here to tell us more about her latest novel THE LIE TREE.

Frances, what was your inspiration for writing THE LIE TREE?

I came up with the idea of a tree that fed on lies while I was taking a long walk, and I don't remember the train of thought that led up to it. Other sources of inspiration included Victorian gothic novels I read while I was growing up, a curiosity about post-mortem photography, the Crystal Palace dinosaurs, and information provided by a good friend with a background in archaeology. 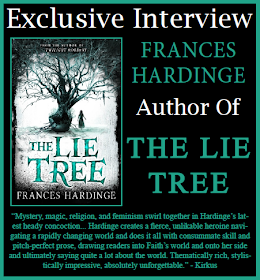 The scenes which I find hardest to write are never the scenes of which I am most proud once the book is finished. I find myself writing and re-writing the scenes that are necessary but less interesting - transitions, journeys, information-dumps and so on. The dramatic episodes I usually find much easier!

The scene that I feel happiest about is probably the confrontation between Faith and her father when she admits to looking in his strongbox. (I'm also reasonably happy with the funeral and its aftermath.)

Well, it's just possible that they might like some of the Victorian novels I read when I was a teenager (I always had a soft spot for Wilkie Collins).

How long did you work on THE LIE TREE?

It usually takes just over a year to write the first draft of one of my books, and then several months for editing. It's always a bit difficult to judge how long has been spent on a book, though, because sometimes there's an overlap with editing work for another book.

Some books are easier to write than others, and The Lie Tree was not one of the easy ones. The last section was a real struggle, so it's good to know that I can push through that kind of difficulty.

As I mentioned, by the time it was done and dusted, I was convinced that everybody would hate it and be horribly disappointed with it. People's reaction to it has been far better than I dared to imagine! This may confirm something that my friends have been saying for a while - that I have zero ability to judge my own work.

What do you hope readers will take away from THE LIE TREE?

Well, most of all I hope they enjoy it! Yes, it does touch on some important topics, but it's still a murder mystery, adventure and tale of the fantastical.


The Lie Tree is my seventh published book.

I've been scribbling something or other ever since I could hold a pencil, and started submitting short stories to magazines and competitions when I was sixteen. During my twenties I took part in several writers' groups. I wrote a lot - stories, attempts at novels, text for narrative-based games - and gradually improved, receiving lots of rejection letters along the way. Eventually I got some short stories published, and won a couple of short story competitions. Then my friend Rhiannon Lassiter (who was already a published author) persuaded me to write a children's book, since she'd realised that this would suit my writing style.

I began writing Fly by Night, and when I'd finished five chapters, Rhiannon told me I should submit it to publishers. I didn't think it was good enough, and refused, so Rhiannon stole my chapters and took them to her own editor! A week later I had a book contract.

In summary, my route to publication involved decades of persistence, followed by a dollop of luck and a very good friend.

In the case of The Lie Tree, there was certainly a moment when I knew that I had the heart of a story. While hiking, I came up with the idea of a plant that could be fed lies, and would bear fruit that could be eaten to learn secrets. At that moment I didn't know what I was going to do with it, who the characters would be or where the story would be set, but I still sensed that I could build a book around it.

I usually work in my study at home. It doubles as a storeroom, so there are lots of boxes, rolls of wrapping paper, tents, etc. but it has a nice view down into a little local park. Sometimes if I'm stuck I'll go for a long walk to work through the plot knots.

I try to work approximately nine to five, but I'm definitely more productive on the days before my writers' group sessions, since deadlines do seem to sharpen my concentration!

Occasionally I'll listen to music while I work, but it's usually instrumental, or with lyrics that aren't too obtrusive. Now and then if there's a track that's connected in my mind to a particular character or scene, I'll play it over and over on a loop to keep myself in the right mindset.

Don't be afraid of writing rubbish. No writing is wasted – you always learn something from it.

I'm writing another YA book. Once again, it will be a historical fantasy, but this time set near the start of the English Civil War. In this deliciously creepy novel by the author of the critically acclaimed Cuckoo Song, the fruit of a magical tree uncovers dangerous truths

Faith Sunderly leads a double life. To most people, she is reliable, dull, trustworthy—a proper young lady who knows her place as inferior to men. But inside, Faith is full of questions and curiosity, and she cannot resist mysteries: an unattended envelope, an unlocked door. She knows secrets no one suspects her of knowing. She knows that her family moved to the close-knit island of Vane because her famous scientist father was fleeing a reputation-destroying scandal. And she knows, when her father is discovered dead shortly thereafter, that he was murdered.

In pursuit of justice and revenge, Faith hunts through her father’s possessions and discovers a strange tree. The tree only bears fruit when she whispers a lie to it. The fruit of the tree, when eaten, delivers a hidden truth. The tree might hold the key to her father’s murder—or it may lure the murderer directly to Faith herself.

Frances Hardinge spent her childhood in a huge, isolated old house in a small, strange village, and the two things inspired her to write strange, magical stories from an early age. She studied English at Oxford University and now lives in Oxford, England.

Have you had a chance to read THE LIE TREE yet? Are you able to judge the quality of your own work? Do you learn something even from writing you don't use? Share your thoughts about the interview in the comments!