Best of AYAP: The Query Trenches

So you've finished your novel, polished it to perfection, and you're starting the journey toward an agent and publication. Whilst we all hope for a quick, painless ride, the reality is that it takes a lot of work to showcase your book in its best possible light - sometimes it feels like crafting the perfect pitch or query can take almost as many rewrites as the book itself!

The posts collected below cover everything from developing your pitch, delivering it at conferences, crafting your perfect query and how to keep on writing even in the face of rejection. 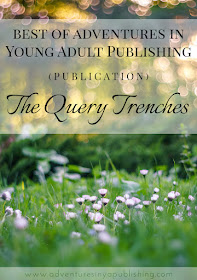 On Figuring Out Your Pitch

"Everyone struggles with where to begin, and often figuring out where to start the story is the hardest part... Writing a book begins on the first line with a hint of what the story is all about." - Martina Boone


On The Art of Pitching

"Get started by considering what your fears are and what you are afraid will happen in a pitch session. By writing it down, you’ll be able to face those fears head-on and control the power they have over you." - Ronda Payne


On Nailing Your Pitch

"At that moment, PITCH became the most important word in my vocabulary. I spoke of little else during the next three days." - Jaycee Kaycee

"When you're ready to send out that query, you want to be sure you're doing it right and sending it to the right people, but how do you know?" - Lisa Gail Green


On Writing a Successful Query Letter

"It's the specifics, the how to write a query letter and who to send it to, that's elusive. But don't worry, there are really only a handful of things you need to know to improve your chances of success." - Sandra Held


On Coping with Doubt and Rejection

"Why am I even trying to write? I’m no good at this. I wouldn’t know a good sentence if it jumped up and tattooed itself on my butt! I’m tired of having to rewrite, rewrite and rewrite. If I was any good, I’d get it right the first time." - C.C. Hunter


On the Steps Before an Agent

"The only thing that needs to stand out is your manuscript. Accosting an agent at a conference or trade show, sending them chocolate along with your query letter, or even going to their offices in person, isn't going to change how they feel about your manuscript when they read it." - Martina Boone


On Understanding Your Rejection Letter

"Have you ever gotten a rejection letter and wondered what it meant? Actually felt happy to get a rejection letter? Or gotten one that makes you want to burn your manuscript and take up something less risky than writing, like say sky-diving?" - Martina Boone


On Perseverance and Rejection

"I think everyone has a different story about their road to publishing, but I think almost every author could agree the process was far from easy, sometimes even painful." - Hilary Wagner

"As someone who used to take martial arts, I can tell you that getting punched in the face hurts like a mother. And, unfortunately for me, I was punched/kicked in the face quite a bit because I’m no Bruce Lee." - Cole Gibsen

What do you think? Was there any advice that particularly resonated with you? Any posts you think we've missed that should be on this list?
Want to read the rest of the series? Click here!
Lindsey Hodder at 6:00 AM