What Makes a Great Book Idea? Eight Questions You Need to Ask Before You Start Your Novel 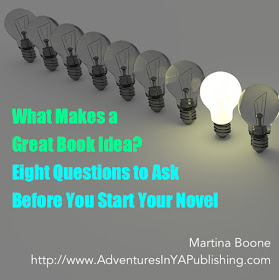 I did a couple of panels at libraries over the weekend with a fantastic group of authors, and last night, Austin from ReadingTeen.com asked us a question that really made me stop and think. He asked how to choose which idea to work on.

This is something that many aspiring authors want to know. It's something that published authors struggle with because for us the stakes are higher--if we choose the wrong idea, we can end up with our career grinding to a halt.

Ideas are a dime a dozen. As writers, we can find them anywhere--in history, in the newspaper headlines, in our own life experience, in people that we meet, in situations that we encounter, in things we see online . . .  But taking that ever-growing herd of ideas and culling the best idea from it, then wrangling that idea into something that's ready to go to market? That's an art form in itself.

From a practical perspective, there is a list of questions that we should ask ourselves about every idea that we evaluate.


The last two items are non-negotiable--without them, you can't have a successful book. But you should strive to include as many of the other elements as possible. None of them is a guarantee, but the idea that addresses them all is likely to keep you interested and get attention once you write it!

What makes you know that you have an idea you have to explore?

"Darkly romantic and steeped in Southern Gothic charm, you'll be compelled to get lost in the Heirs of Watson Island series." —  #1 New York Times Bestselling Author Jennifer L. Armentrout
Martina Boone at 10:02 AM