It's the last week of winter, and we couldn't be more excited! We're so ready for spring to arrive. In the meantime, we have two wonderful books to give away this week: the latest in Darren Shan's Zom-B series, and Stefan Bachman's A Drop of Night. 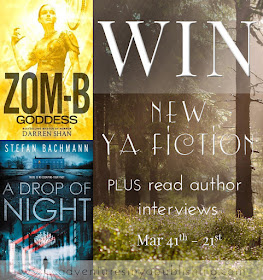 Author Question: What is your favorite thing about Zom-B Goddess?

This is an easy one -- my favourite thing is that it's the last book in the series! I spend several years working on a long series like Zom-B, and I never know when I start out if I'll make it to the end. Where will the story lead me? What if I hit a dead end and can't find a way to go on? What if my publishers lose interest and dump me halfway through? What if something happens in my day-to-day life which limits my ability to write? Heck, what if I die before I finish?!? Those thought are always fluttering through my head when I commit myself to a longhaul storyline, and they only really go away when that final book hits the stands, so while I'm pleased to see any of my books see print, there's always an extra dollop of pleasure (and relief) involved when it's the final book of a series. It means I get a chance to draw breath and relax... until the beginning of the next one! Author Question: What is your favorite thing about A DROP OF NIGHT?

“I love some of the visuals in the book. It’s a twisty thriller, and I wanted it to be as fast-paced as possible, so there’s not quite as much space for elaborate descriptions, but the book does have historical flashbacks set in Revolution-era France, and also a slightly futuristic modern day narrative, and sometimes the two intersect. That contrast between French Rococo, Sun King palaces and sleek, 21st century technology is something I liked a lot.

On a personal level, I love that the book is different from what I usually write. It was definitely an experiment. My first books were middle grade fantasy, and the prose was very fairytale-like and old-fashioned. This book is written in first person present, and we’re in the head of a snarky and hurt and angry main character. Writing it was sometimes difficult, and I kept being like, “Whyyyyy didn’t I just stick with middle grade,” but I’m super glad I did it now. I think the result is a weird-but-hopefully-exciting pastiche of thriller and historical and horror, and I hope some people like it.

Save Me, Kurt Cobain by Jenny Manzer - Lisa J. Hermione Winters is captain of her cheerleading team, and in tiny Palermo Heights, this doesn’t mean what you think it means. At PHHS, the cheerleaders don’t cheer for the sports teams; they are the sports team—the pride and joy of a tiny town. The team’s summer training camp is Hermione’s last and marks the beginning of the end of…she’s not sure what. She does know this season could make her a legend. But during a camp party, someone slips something in her drink. And it all goes black.

In every class, there’s a star cheerleader and pariah pregnant girl. They’re never supposed to be the same person. Hermione struggles to regain the control she’s always had and faces a wrenching decision about how to move on. The assault wasn’t the beginning of Hermione Winter’s story and she’s not going to let it be the end. She won’t be anyone’s cautionary tale. The beautiful struggle of a girl desperate for the one relationship that has caused her the most pain.

Cassie O'Malley has spent the past two and a half years in a mental institution—dumped there by her mother, against her will. Now, at 18, Cassie emancipates herself, determined to start over. She attends college, forms new friendships, and even attempts to start fresh with her mother. But before long, their unhealthy relationship threatens to pull Cassie under once again. As Cassie struggles to reclaim her life, childhood memories persist and confuse, and Cassie must consider whose version of history is real, and more important, whose life she must save.

A bold, literary story about the fragile complexities of mothers and daughters and learning to love oneself, The First Time She Drowned reminds us that we must dive deep into our pasts if we are ever to move forward. In this dark, action-packed third book in the New York Times bestselling Dorothy Must Die series, Amy Gumm—the new girl from Kansas—must do everything in her power to save Kansas, kill Dorothy, and make Oz a free land once more.

Amy Gumm’s mission to take down Dorothy Gale is not going according to plan. Dorothy has found a way to bridge the worlds of Oz and Kansas, and if the power-hungry dictator of Oz has her way, Kansas will be destroyed forever. Now, Amy has to team up with the Revolutionary Order of the Wicked to save her home, restore the balance between the magic and nonmagic worlds, maybe get the guy—and kill that not-so-sweet Kansas farm girl once and for all.

In the third installment of the New York Times bestselling Dorothy Must Die series, Danielle Paige’s twisted versions of beloved Oz characters are back, including the biggest, baddest, most famous of all: the Wicked Witch of the West.

Welcome to the other side of the rainbow. Here there’s danger around every corner, and magic shoes won’t be able to save you.