Stefan Bachmann, author of A DROP OF NIGHT, on easy scenes growing organically

We're excited to have Stefan Bachmann join us to share more about his latest novel A DROP OF NIGHT. 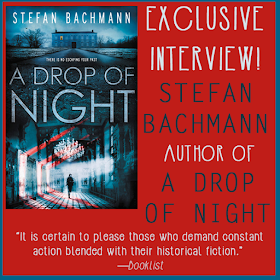 Stefan, how long did you work on A DROP OF NIGHT?

Ages! Up until writing A Drop of Night I had usually been able to finish a book in about a year, with maybe 4-5 months of revising afterwards. This book took a solid three years from the initial idea back in 2012 to now, and there were many, many drafts and rewrites and despairing email exchanges in between.

For me, usually the scenes that are easiest to write end up being the ones I like most. I wish it weren’t like that, but an easy scene usually means I’m in the flow and the scene is growing organically out of what came before. If a scene is difficult to write, I’ve found it usually means something isn’t working with the rest of the story, or I haven’t fully imagined it yet. I think the first 50-or-so pages of this book got re-done quite a few times.

As for favorites, there’s one scene in A Drop of Night where two characters, one a young peasant fellow and the other a wealthy daughter of a marquis, both captives in the underground Palais du Papillon, discuss their various plights and who has it worse. I think it conveys the book’s message in a nutshell and I do like that scene a lot.

I love writing on trains or planes or places where there’s a lot of movement. And I definitely listened to music writing this one. I’m a musician, so usually music distracts me to the point where I’ll stop writing and just listen to whatever’s playing, but for this book music helped a lot. I have a song for almost every scene in the book that I would play on repeat while I was writing. There’s one song on my playlist (“Solo Dancing” by Indiana, in case you’re curious) that was played 422 times.

A Drop of Night is my first foray into YA, and I’m going back to writing middle grade now. I just sent off my next manuscript to my editor. I looooooved writing that one. It’s about a fleet of glorious monsters who emigrate from the Moon to Earth sometime in the Middle Ages, and it involves secret cults and children with mysterious powers and all the fun things I like to read about. I’m not sure when it will be out, but hopefully in 2017 sometime. Stefan Bachmann was born in Colorado and spent of most of his childhood in Switzerland, where he's now a student of music at the Zürich University of Arts.

His debut, gothic-faery-fantasy THE PECULIAR, was a New York Times Editor's Choice and a Publishers Weekly Best Book of 2012, and was translated into eight languages. Its companion, THE WHATNOT, was released on September 24th, 2013.

THE CABINET OF CURIOSITIES: 36 TALES BRIEF AND SINISTER, a collection of scary stories he wrote together with authors Emma Trevayne, Claire Legrand and Katherine Catmull, was released May 27th, 2014, from Greenwillow/HarperCollins.

His next book, YA thriller A DROP OF NIGHT, about a group of American teens fighting to survive after they become trapped in an underground Versailles, will be out March 15th, 2016, also from Greenwillow/HarperCollins.
---

Have you had a chance to read A DROP OF NIGHT yet? Do you find if a scene is difficult to write that signals something isn't working? Have you ever listened to the same song 422 times? Share your thoughts about the interview in the comments!