Maggie Hall, author of MAP OF FATES, on getting the writing done

MAP OF FATES is the second book in The Conspiracy of Us series, and we're thrilled Maggie Hall swing by to chat about it. 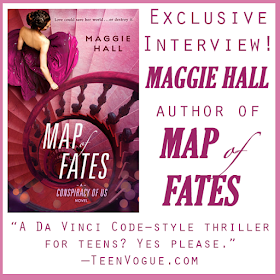 Maggie, how long did you work on MAP OF FATES?

Since MAP OF FATES is the second book in a trilogy, and therefore already contracted and slated to come out approximately a year after the first book, the process of writing and editing it was very different from writing and editing a debut. That’s one reason second books in a series are so hard—you’ve gone from having all the time in the world before you sell your first book to having to conceptualize, write, and edit it, then go through all rounds of edits with your editor, in under a year. To non-writers, that sounds like a long time, but to us author-types, it’s pretty short!

What did this book teach you about writing or about yourself?
Leading in from the previous question, it taught me that if the writing has to get done, the writing will get done. I worked on CONSPIRACY OF US for a looooong time. I tried things. I deleted things. I scrapped half the book and rewrote it—then I scrapped half of that again. And that was before edits with my editor. I did all that at a pretty leisurely pace. With MoF, I learned to get what I needed to done quickly. There were absolutely times during the writing of it when I didn’t think I could do it. I didn’t have the time, I didn’t have the energy, I had (literally) lost the plot. But because Deadlines, somehow it ended up getting done, and I truly think MAP OF FATES is a better book than CONSPIRACY was, despite the much abbreviated timeline.

I often hear the CONSPIRACY OF US series compared to Ally Carter’s books, and though I’m definitely flattered (her books are great!), I actually don’t think they’re much like mine once you get past the very surface similarities.

I’ve always thought the closest series to mine is Cassandra Clare’s Mortal Instruments series. Though my books don’t have any magic or paranormals, they have a similar storyline, of a girl who has found her place and a new group of friends in a world previously unknown to her, and who has to navigate danger and physical and emotional strife in that world. I think those books have a feel closer to mine than just about anything else I can think of.

That being said, I do think readers who love the international mystery side of my books would love Ally Carter, if they haven’t already read her stuff. And Jennifer Lynn Barnes’ books are great, exciting thrillers that I think would appeal to my readers, too! That’s how long it took for Avery West’s ordinary life to change forever: In two weeks, she discovered she was heiress to a powerful secret society known as the Circle, learned her mother was taken hostage by the Circle’s enemies, and fell for a boy she’s not allowed to love, just as she found out another was her unwelcome destiny.

Now, Avery crosses oceans in private jets to hunt for clues that will uncover the truth about the Circle, setting her mom and herself free before it’s too late. By her side are both the boys: Jack—steady, loyal, and determined to help her even at the expense of his own duty—and Stellan, whose connection to Avery grows stronger by the day despite her best intentions, making her question what she believes at every turn.

But at the end of a desperate hunt from the islands of Greece to the red carpet at Cannes comes a discovery that not only changes everything, but could bring the whole world to its knees. And now Avery is forced to face the truth: in the world of the Circle, no one is what they seem.

Maggie Hall is a traveling, decorating, champagne-drinking, USC-football-watching YA author. She is currently traveling the world for an indefinite amount of time with her husband, which means right at this moment, she might be on a beach in Thailand, drinking wine in Paris, or anywhere in between. Her debut novel, a YA international thriller, is coming from Putnam/Penguin in 2015.

Have you had a chance to read MAP OF FATES yet? Do you find second books in a series harder to write? Do deadlines help you write faster? Share your thoughts about the interview in the comments!