Judy Sheehan, author of I WOKE UP DEAD AT THE MALL, on not letting criticism slow you down

We're excited to have Judy Sheehan stop by to give us the scoop on her novel I WOKE UP DEAD AT THE MALL. 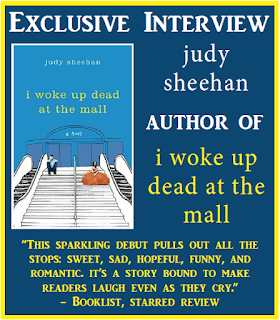 Judy, what was your inspiration for writing I WOKE UP DEAD AT THE MALL?

Ah! I was riding the subway in NYC, reading a book on the Kindle app on my phone. It was a funeral scene for a young man who died in WWII. His sister observed at his funeral that this was the big party that the guest of honor could not attend. I looked up from my phone, letting that observation sink in. I saw a group of teenage girls across from me, giggling over an iPhone. I suddenly thought of them in the afterlife, wondering whose funeral got the most "likes" on Facebook. And really, the whole book landed in my head. The subway got to my station, and I sprinted home to write down my idea. I was so excited, I knew there was a book here.

Sarah's funeral was unbearably hard to write. And it remains one of my favorite scenes. The idea that she was taken away from all that life, all that love, all that potential -- it broke my heart. Imagining a 16-year old girl saying goodbye to her grieving father was much, much too hard to write. I wrote that scene with my own father's funeral in mind, and really struggled to hold myself together. The emotions became so strong, I had to move her words into song lyrics, and still -- I could barely make it through. The irony here is that the book is filled with humor, but then the reader finds these scenes, filled with heartbreak.

What do you hope readers will take away from I WOKE UP DEAD AT THE MALL?

Be aware of the choices you are making. These choices are your life. In the book, the afterlife focuses a great deal on "free will" and on the concept that "we are the stories we tell ourselves." It's all too easy to feel like we are the victims of fate, and yes, in many ways, we are. But ultimately, we must choose how we respond to our circumstances. What is the story you are telling yourself? How do you describe your life and your struggles? That is your story.

I used to write at Starbucks, but I've learned to write at home, as long as I have my music. Deep apologies to the musicians on my phone, but I have a totally Pavlovian response to my playlist. It forms a sort of wall around me and lets me focus on my writing, The bad news: I need to have tea and pastries available to keep me going. Cinnamon = writing. And this means that each new book means a fair amount of carbs. Oh dear...

It's fun. It's different. It keeps me up at night. I hope it does the same for you! hen Sarah wakes up dead at the Mall of America, she learns that not only was she murdered, her killer is still on the loose. I WOKE UP DEAD AT THE MALL is a terrifically fun & voicey YA novel that tackles some of life’s – and the afterlife’s – biggest questions.

When you’re sixteen, you have your whole life ahead of you. Unless you’re Sarah. Not to give anything away, but . . . she’s dead. Murdered, in fact. Sarah’s murder is shocking because she couldn’t be any more average. No enemies. No risky behavior. She’s just the girl on the sidelines.

It looks like her afterlife, on the other hand, will be pretty exciting. Sarah has woken up dead at the Mall of America—where the universe sends teens who are murdered—and with the help of her death coach, she must learn to move on or she could meet a fate totally worse than death: becoming a mall walker.

As she tries to finish her unfinished business alongside her fellow dead teens, Sarah falls hard for a cute boy named Nick. And she discovers an uncanny ability to haunt the living. While she has no idea who killed her, or why, someone she loves is in grave danger. Sarah can’t lose focus or she’ll be doomed to relive her final moments again and again forever. But can she live with herself if she doesn’t make her death matter?

Judy Sheehan is one of the original cast members and creators of the long-running stage hit Tony ’n’ Tina’s Wedding. She was the playwright-in-residence at New York City’s prestigious Looking Glass Theatre and has had plays produced there and at regional theaters around the country. She lives in New York City, which is sort of like living in a giant mall.

--
Have you had a chance to read I WOKE UP DEAD AT THE MALL yet? Have you struggled to hold yourself together while writing a scene? Do you build your writing muscle with regular use? Share your thoughts about the interview in the comments!