Jessica Love, author of IN REAL LIFE, on writing being a battle of wills

We're delighted to have Jessica Love stop by to tell us more about her latest novel IN REAL LIFE. 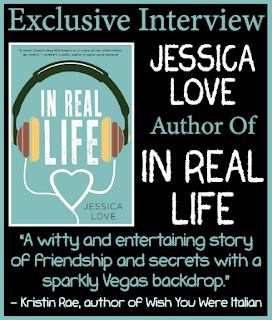 Jessica, what was your inspiration for writing IN REAL LIFE?

A reality show I was watching several years ago. The episode featured a guy and a girl who were meeting in person for the first time after talking on the phone for five years. I was fascinated by their relationship, especially because I have so many of my own special relationships with people I met virtually before I met them in person, and I immediately thought it would make a fun YA story.

How long did you work on IN REAL LIFE?

I worked on it for a year before sending it to my agent. She wanted me to make some changes, and at the same time I started working on PUSH GIRL, my debut novel. So I took a break of about six months while I wrote PUSH GIRL, then went back to IN REAL LIFE to finish it. It was about two years between when I started it and when it sold to St. Martin's, but there was a big gap in the middle where I was working on PUSH GIRL. It's pretty weird that PUSH GIRL came out way before IN REAL LIFE when IRL was written before it.

I can write at home, but I find that I get too distracted. There's always something to do at home, and when I'm stuck at a tough part with my writing, it's too easy to walk away and clean the bathroom or walk the dogs or something, anything, instead. I focus much better when I write somewhere public, and Panera is my favorite place because they have yummy food and treats. I also usually can't stay there forever, so writing there forces me to be efficient with my time.

I love listening to music when I write, but it has to be something that won't distract me. The best thing for me is something super familiar that I know so well that I don't even really pay attention to it anymore. When I'm really into a scene I'm working on, I'll often have one song that ties in with the scene emotionally and just listen to that same song on repeat.

For me, writing is a battle of wills. It takes everything in me to keep myself focused on what I'm working on. Hannah Cho and Nick Cooper have been best friends since 8th grade. They talk for hours on the phone, regularly shower each other with presents, and know everything there is to know about one another.

Hannah has spent her entire life doing what she's supposed to, but when her senior year spring break plans get ruined by a rule-breaker, she decides to break a rule or two herself. She impulsively decides to road trip to Vegas, her older sister and BFF in tow, to surprise Nick and finally declare her more-than-friend feelings for him.

Hannah's romantic gesture backfires when she gets to Vegas and meets Nick's girlfriend, whom he failed to mention. And it turns out his relationship status isn't the only thing he's been lying to her about. Hannah knows the real Nick can't be that different from the online Nick she knows and loves, but now she only has one night in Sin City to figure out what her feelings for Nick really are, all while discovering how life can change when you break the rules every now and then.

Jessica is a high school English teacher who lives in Southern California with her husband, her son, and their two tiny dogs. She's working on her Master's Degree in Writing for Children and Young Adults from Spalding University, and her big love is contemporary YA romance. Jessica spends all of her free money on concerts, constantly tries to prove that blondes have more fun, and is pretty much always on the internet.

IN REAL LIFE will be released from St. Martin's/Thomas Dunne on March 1, 2015. PUSH GIRL, co-written with Chelsie Hill from Sundance Channel's reality TV show Push Girls, is out now.
---
Have you had a chance to read IN REAL LIFE yet? Has a reality show ever inspired you to write a story? Do you struggle to stay focused on what you're working on? Share your thoughts about the interview in the comments!