Today we're welcoming Ashley Hearn to the blog. Ashley is part of our unpublished writer series, helping AYAP showcase the stages of being a writer that come before publication. Today, Ashley is talking about the benefits of writing fan fiction to a writing education.

My name is Ashley Hearn, and I write fan fiction.

Well, not much anymore, but still, for catharsis sake, I needed to see that sentence out in the world. Seventeen-year-old me, scarred from her years on the cheerleading squad and yearning to be popular, was convinced that if anyone discovered her secret fan fiction writing obsession, she would be ostracized to the deepest circle of high school hell.

Needless to say, I survived high school, and I continued writing fan fiction until, late in college, the first seeds for an original story planted themselves in my brain. At that point, the center of my universe shifted, and I began writing with the goal of publishing. Those years spent on fan fiction, however, were not wasted. I was practicing useful skills that would ultimately make my transition to original fiction a little more smooth and a lot less terrifying.

#1 - It got me used to sharing my stories and receiving feedback.

Putting your words, your babies, out into the world for strangers behind computer monitors and online personas to pick apart is terrifying, but learning to receive feedback is an essential skill for any writer. The road to publication is paved with feedback, whether it’s from a critique partner, beta reader, agent, editor, or reader. Some of that feedback will be sweet, some brutally honest, some hard to digest, and some you will resist only to realize in the shower one morning that it’s the answer to all of life’s mysteries.

Writing fan fiction not only got me used to receiving feedback, it made me a feedback addict. I would compulsively check my email after posting a new chapter to see if a review had dropped (wait, writers compulsively check their emails?!), and getting those reviews, knowing people were reading my stuff and reacting to it, kept me going. When I started working on original fiction, I knew I had to find critique partners to fill the void left behind by my reviewers. Upon finding those coveted CPs, and later my agent, I was eager to share my work with them.

#2 - It forced me to think about character and world building.

Full disclosure: I wrote fan fiction mostly for the Legend of Zelda universe. The games left so much up to the imagination. The main character, Link, doesn’t even talk. He’s a blank slate for the gamer to project on, which for someone with a hyperactive imagination, is basically a golden ticket to go nuts.

I’ve often heard one of the “down sides” to writing fan fiction is that the characters and world aren’t really yours. Maybe they aren’t in the legal sense, but the best fan fiction often uses its source material as a starting point rather than a bible. In my 100,000+ word Legend of Zelda epic, over half the characters were entirely of my own creation. I took the game map and blew it up, adding my own regions and cities and cultures and histories. I took a magic system that was a peripheral element in the game and made it essential. I fleshed out backstories for characters that the games either hinted at or omitted entirely. I gave flat characters, like the main character Link, flaws to overcome (and dialogue, I gave him that too). By the time I finished developing my version of Hyrule, it felt like mine in the truest sense. This was great practice for character and world building in my original work, where I still draw from source material for influence: folk stories and fairy tales, places I’ve visited, documentaries I’ve watched, people I know, and books or movies I’ve loved.

#3 - It forced me to think about story structure and plotting.

While I wasn’t the most effective plotter in my fan fiction days (I chose to outline chapter-by-chapter, instead of by beats, as I do now), I had to start somewhere. Plotting my fan fiction got me thinking about romantic arcs, character arcs, plot arcs, how those three are shaped, and how they intersect. I knew where the story was going, what obstacles the characters were going to face, and how they needed to grow to overcome those obstacles. What was the inciting incident? The complicating action? The midpoint? The all-hope-is-lost moment? The best fan fiction hits these beats just like original fiction. You can never have too much practice developing stories.

When I jumped into fan fiction, I was determined to do it the “right way.” That is, rise above some of the blather clogging the pipes of fan fiction websites and present myself as a serious writer who produced quality stories. Immediately, I found a beta reader (thanks Nendil!), who I still owe my writing soul to. She read and marked-up my chapters before I posted them, catching my typos, redundancies, point-of-view breaks, cliches. From her critiques, I strengthened my copyediting skills, started thinking about how to make my side characters more rounded, learned some of my writing ticks (like how I tended to say the same thing two different ways, when only was was needed) and, most importantly, I gained my first true critique partner.

#5 - It got my butt in a chair and my fingers on a keyboard.

All told, in five years of writing fan fiction I wrote about 200,000 words. Not a blazing fast pace, by any means, but it is something. To draw on a metaphor from my sports world, you don’t get good at hitting jump shots until you’ve practiced 200,000 jump shots. Fan fiction was my practice for the “game” of writing original fiction. Because I wasn’t writing to publish professionally, I could write freely and hone my craft without the pressures of querying. Essentially, fan fiction was my “practice novel,” so that when I was ready to enter the publishing game, I wasn’t coming off the bench cold. 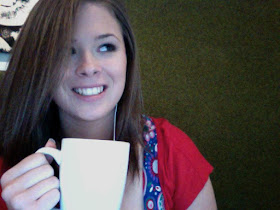 Ashley Hearn is YA author, an intern at Entangled Teen, and a producer for the Badger Sports Report, the football and basketball coach’s television show for the University of Wisconsin-Madison. She is an addictive coffee drinker, a Gilmore Girls fanatic, and a proud Gryffindor. When she ferrets away enough gas money, she can be found scouring the Georgia and South Carolina Sea Islands for ruined plantations, folk magic, and a fresh story.