ATLANTIS QUEST is the second book of the Atlantis Rising series, and we're excited to have Gloria Craw here to chat about it. 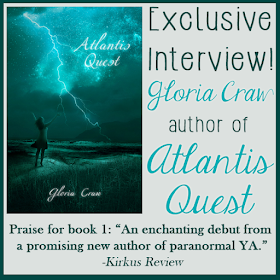 Gloria, what scene was really hard for you to write and why, and is that the one of which you are most proud? Or is there another scene you particularly love?

There’s a scene between Alison and Ian when she explains her reluctance to have a romantic relationship with him. Her reasons are a bit different than they were in the first book, and they come as a shock to him. It’s an emotionally charged conversation, and I wanted to do justice to both of their emotions and adequately explain their points of view. I rewrote that scene numerous times before I felt I got it just right.

It is one of the scenes I’m most proud of, not only because of the time and effort that went into it, but because it’s a pivotal moment for these two characters I love. Just an FYI, all hope is not lost for them.

I wish I could say the road was easy, but it wasn’t. It was strewn with blood, sweat and tears. I wrote two as yet, unpublished books before I started working on the Atlantis Series. For six months, I queried agents hoping someone would pick them up. The rejections rolled in, but I put my nose to the grindstone and worked hard to finish Atlantis Rising. When it was time to look for representation on that manuscript, I contacted an agent who had been particularly kind in her former rejection letter and she picked me right up. From then, it took another two years for the book to hit shelves.

My writing rituals went through an evolution as I worked on Atlantis Quest. I had been working whenever and wherever I felt the desire. One day, it dawned on me that my method wasn’t an efficient use of time. After this rather obvious realization, I started to set a period of time aside when I can concentrate fully on my work. My most creative period is between ten and one thirty in the afternoon, so I try not to make appointments during those hours.

My other rituals remain pretty much the same. I like background noise while I write. Usually I go to Netflix and play episodes of Bones. I’ve seen all of them enough times that the dialogue doesn’t interrupt my concentration.

As far as location goes, I have a condition called desk-a-phobia. I’ve come to think that desks cause my stress level to spike. I feel pressured to create when I’m in a formal atmosphere and my mind freezes as a result. I like to sit on the sofa or on my bed when I’m writing, and I must have a stash of chocolate within arm’s reach. After all they'd cost me, I thought I was done with the Truss clan. I was wrong. Nikki Dawning, my mortal enemy, has been kidnapped, and I've been asked to spy on the Truss to find her. The pull between Ian and I has never been stronger, but he can't help me this time. I have to rely on Theron, a bad-tempered cousin I didn't know I had. To make matters worse, the people I trust have been keeping secrets.

--
Have you had a chance to read ATLANTIS QUEST yet? Do you set aside periods of time to write or write whenever you feel the desire? Do you write at a desk or do you have desk-a-phobia? Share your thoughts about the interview in the comments!