Cutting words you have lovingly crafted is one of the most painful jobs an author faces. And, yet, we all must. Author Constance Cooper is here today to share some insightful and specific techniques for how she cut 20,000 words from her debut novel. She must have succeeded quite well as not only did the book release this week, but Guile has been named a Junior Library Guild Selection. Welcome Constance!


How I Cut My Novel's Word Count by 20% Without Killing It (or Myself), by Constance Cooper

I was over the moon. My first book, and an editor wanted it! There was only one catch. I would have to get the manuscript down to 80,000 words or less.

I'd read the following advice for writers: “Trust your editor. She is wise.” I took the deal. But I knew it was going to be a challenge. Taking out that many words was more than just a little haircut and fingernail clip. How could I pare down my novel without mortally wounding the plot, characters, and setting?

It would have been easier if the book had had a convenient subplot I could just snip out. Unfortunately, that wasn't the case—each event built on the one before. So I had to do things the hard way: carving away little bits here and there. Here are a few techniques I learned along the way.

The main character in my book spends a lot of time paddling around in a canoe. My manuscript had numerous descriptions of what she sees along the way. A lot of this was just local color and didn't drive the plot. A juicy target for reduction!

There are plenty of ways to zoom a character to a new location. Here are some examples I just made up:


Of course, you wouldn't want to do this if the journey is an important part of the story:


Does it work in reverse?

Sure! Next time I'm looking to slow down the pace of a story, or ratchet down tension, I'll be on the lookout for places where I've teleported the character. I'll give them a more leisurely walk/ride/swim/slither, and add in some details about the setting and their emotional state.

I had quite a few conversations in my manuscript that existed solely to get information across. I did it that way because it was more interesting and I could add character and setting details at the same time. But when I really needed to save space, these were another ripe target. I turned several of these info-dump conversations into straight summaries.

Here's a real example from the novel:

An hour later, rested and somewhat drier, Yonie slipped out the door of her garret with LaRue at her heels and the excuse of the lidded chamberpot swinging from her hand. Fortunately, Gilbert was unaware that most denizens of her neighborhood did not hesitate to empty unpleasant substances directly out the window.

“My dear, I've missed our talks too, but let's make this brief,” said LaRue swiftly, crouching next to the flooded dock with her ears flattened against the rain. “I'll say right away that I've got misgivings about your plan. I know your cousin has his limitations, but he is, when all's told, a strong young man who wants to protect you. Why on earth would you want to split up to go investigating?”

Yonie swished the chamberpot around in the water. “You're making it sound like Gilbert's some big dumb galoot. He's perfectly capable of questioning people in an intelligent way. Maybe even a subtle and devious way. He can ask after Jeanette Bruneau, and it won't be tied to me.”

“You don't know that her surname is Bruneau. You don't even know her given name, for that matter.”

“That's exactly why I need to go to the library—and Gilbert wouldn't be allowed in.”

“But Yonie darling! You must have noticed how nervous he got as soon as we entered the city. Won't he get lost wandering around on his own?”

Yonie clapped the lid onto the freshly rinsed chamberpot and picked it up by its wicker handle. “He might,” she admitted. “Could you follow him, LaRue? Please? After all, you can't come to the library either.”

“Oh, very well.” LaRue rose and followed Yonie, her plumed tail wilted from the rain. “But do me a favor, dear? Suggest that he make that gossipy fishmonger one of his first stops.”

Gilbert objected at first. He had come along to protect Yonie and didn't like the idea of splitting up. But Yonie knew that he had wits as well as brawn. He would be capable of questioning people in an intelligent way, maybe even a subtle and devious way. He could ask after Jeanette Bruneau, and it wouldn't be tied to Yonie. And LaRue would make sure that he didn't get lost.

Of course, Yonie didn't know that her grand-aunt's name was Bruneau—or even Jeanette. That was why she had to go to the library.

Does it work in reverse?

Again, yes! When I need to inject some humor into a story, or squeeze in more background for a character or setting, you can bet I'll be scanning for summaries that I can turn into dialog.

Little space-saving changes that add up

I've resolved to make these part of my normal writing habits from now on. Here are some more made-up examples:

1. Zooming in closer to the character's thoughts:

Sarah gasped. She wondered if Derek was really planning to burn the will.

→ Sarah gasped. Was Derek really planning to burn the will?

She reached out and picked up the Sword of Textual Abridgement.

→ She picked up the Sword of Textual Abridgement.

He jumped up and rushed to the door. But the UPS guy had already been devoured.

→ He rushed to the door. But the UPS guy had already been devoured.

The Valley of Ptomaine lay dry and desolate under the midnight sun.

→ The Valley of Ptomaine lay desolate under the midnight sun.


“Who's the lizard now?” the alligator said in a low, husky voice.

→ “Who's the lizard now?” the alligator said in a husky voice.

“Oh dear me yes, I wouldn't miss it for the world!” Miss Alessandra warbled.

→ “I wouldn't miss it for the world!” Miss Alessandra warbled.


“Well, no, I don't think so.” The apprentice shook his head.

→ “I don't think so.” The apprentice shook his head.

→ The apprentice shook his head.

Does it work in reverse?

Throwing away words and scenes that you've lovingly crafted can really hurt. Here are some ways of thinking that helped me endure the pain:

Regard a negative word count as progress.
I normally like to enter my word count into a spreadsheet that shows me how much I've written that day. For my editing blitz, I kept track of how many words I'd removed. At first it was weird, but after awhile it gave me a sense of accomplishment. I kept telling myself things like “Ha! I did even better today than yesterday!” or “OK—halfway there!”

Concentrate on keeping your favorites.
When I was whittling down a description or conversation, I tried hard to think about what I was keeping rather than what I was throwing away. I dwelled on how the best parts would now be more prominently displayed. I found that when faced with, say, four sentences describing a room, it was pretty easy to see what should go.

Save reusable parts.
I kept some chunks of description and turns of phrase to use in future projects.

Think about how you're improving your writing skills.
Cutting down my manuscript gave me more of a feel for pacing than I had before. It also pointed out some bad habits of mine. For instance, I found that my characters raised their eyebrows way too often. I also discovered that I'd used the word “sinister” seven or eight times in the course of the novel. Also the word “twist.” (What this says about me, I don't know.)

Was it worth it?

Absolutely. My editor was indeed wise, in this as in so many things. My book turned out to be 384 pages, a good length for a YA novel. Not only did I get my book published, I also made it a better book than it was before. And I learned new skills along the way! 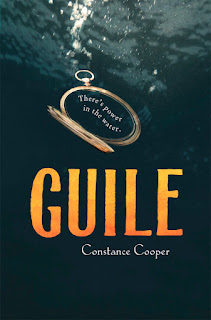 The water throughout the Bad Bayous is thick with guile, a powerful substance that changes objects and people exposed to it, for better or worse.

Sixteen-year-old orphan Yonie Watereye ekes out a meager living posing as a "pearly," someone who can sense the presence of guile. Yonie's situation is precarious, to say the least: she isn't a pearly, and her "seeings" are performed by her cat.

Already rejected by her papa's swamp-dwelling family, Yonie decides to investigate her mother's mysterious upper-class background. When her High Town relatives rebuff her, Yonie suddenly has new mysteries to solve. Was her parents' death really an accident? Where is her grand-aunt Nettie? And what unknown person is making malevolent use of powerful guile-changed things--one of which is nearly fatal to Yonie herself?

Family ties, family secrets, a whisper of romance, and an array of guile-filled objects are artfully entwined in this layered tale of a young woman looking for her true family and her true home. 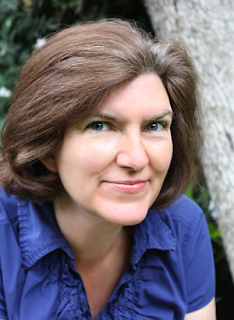 Constance Cooper's fantasy novel Guile was released March 1, 2016 by Clarion Books, an imprint of Houghton Mifflin Harcourt. Her short stories have appeared in various magazines and anthologies including Asimov's Science Fiction, Strange Horizons, and Lightspeed. Her work has been podcast, translated into Swedish and Hebrew, and included in “Best of” collections. She also writes speculative fiction poetry, and has twice been nominated for the Rhysling Award.

Constance grew up mainly in the San Francisco Bay Area, with one year spent in Surrey, England and a chunk of another spent in Newfoundland, Canada. She studied journalism at UC Santa Cruz, where she hiked to class through redwood forest, explored secret caves, and helped edit the college newspaper. Later she earned an MA in Linguistics at the University of Pennsylvania, and stayed on in Philadelphia working on a linguistic research project before getting sucked into the brand-new world of website design.

After Constance met her husband, they moved to Edinburgh, Scotland for two years, where she morphed into a software engineer. Just as she'd acclimated to saying “beeta testing” and “proh-cessor,” she and her husband returned to the San Francisco Bay Area to work for a natural language search company.

Constance now lives in the Bay Area with her husband and two children, and is enjoying ever-increasing time to write the kind of stories she's always loved. Her published science fiction so far has all been set on alien planets, and often told from alien viewpoints (including reptilian, mammalian, and crustacean analogues.) In writing fantasy, she's attracted to inventive, nonstandard settings, light touches of humor, and just pure adventurous fun. Constance's writing also shows the influence of her love for mysteries.