We're thrilled to have Constance Cooper join us to share more about her debut novel GUILE. 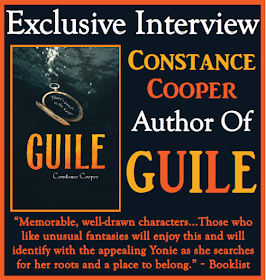 Constance, what was your inspiration for writing GUILE?

I started with the idea of a witch and her cat familiar, and altered it beyond all recognition. The “witch” is young, and it's her cat who actually has the magic. And no one in the book actually uses the words “magic” or “witch.”

Because it's fun to torture your characters (heh heh) I decided that in this world, animals with magic are customarily killed, and people with magic are not socially acceptable. Even talking about magic is considered risque. So my main character Yonie is struggling to make a living in a disreputable profession, while concealing the fact that it's actually her cat doing the work behind the scenes.

Then I gave Yonie a dangerously high level of curiosity, and took things from there.

I don't want to give anything away, but there's one point in the book where Yonie hugely embarrasses herself. Normally she's got a real gift for putting together tiny details to deduce answers, and during most of the book that works well for her. But unfortunately, one of her intuitive leaps takes her in entirely the wrong direction. Add in her quick temper, and voila: major public humiliation. (With press coverage!) It wasn't funny for Yonie, but it was lots of fun for me.

GUILE is the first book I've ever written. I started by writing short stories, and after I'd sold seven of those I decided it was novel time. I took one of my longer short stories (“The Wily Thing”, published in Black Gate Magazine) and used that as a starting point.

I did this partly because I was worried about being able to produce enough words for a whole novel (which is funny in retrospect, because I ended up with a really long manuscript that I had to prune way down.) The other reason I started with an existing story is that later when I was looking for an agent, I was able to say “The first little piece of this novel already got two Honorable Mentions and the following nice reviews.”

It was challenging, figuring out what should happen next in a story that I hadn't actually planned as the start of a novel. But it was also fun returning to a setting and characters that I already knew I would enjoy. Yonie Watereye lives in the bayou. The water there is full of guile, a power that changes people and objects. Yonie, 16, makes a living investigating objects affected by guile, but in fact it’s her talking cat, LaRue, who has the power to see guile.

Yonie becomes aware that someone is sending harmful guile-changed objects to certain people, including herself. Her investigation becomes entwined with her hunt for the secrets of her mother’s past and leads her to discover dangers hidden within her own family.

In the suspenseful adventure that follows, Yonie and her furry sidekick face challenges that could end their adventuring forever. 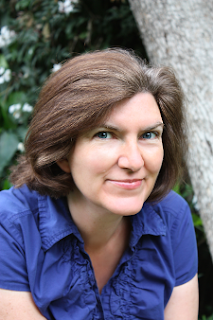 Constance's fantasy novel Guile was published March 1, 2016 by Clarion Books, an imprint of Houghton Mifflin Harcourt. Guile is set in the Bad Bayous, where the water makes strange and unpredictable changes to things (or animals, or people) that soak too long.

Constance's short stories have appeared in Asimov's, Strange Horizons, Lightspeed, and various other publications. Her work has been podcast, translated into Swedish and Hebrew, and included in “Best Of” anthologies. She also writes sf poetry, and has twice been nominated for the Rhysling Award.

Constance grew up mainly in the San Francisco Bay Area, with one year spent in Surrey, England and a chunk of another spent in Newfoundland, Canada. She studied journalism at UC Santa Cruz, where she hiked to class through redwood forest, explored secret caves, and helped edit the college newspaper. Later she earned an MA in Linguistics at the University of Pennsylvania, and stayed on in Philadelphia working on a linguistic research project before getting sucked into the brand-new world of website design.

After Constance met her husband, they moved to Edinburgh, Scotland for two years, where she morphed into a software engineer. Just as she'd acclimated to saying “beeta testing” and “proh-cessor,” she and her husband returned to the Bay Area to work for a natural language search company.

Now Constance lives in the Bay Area with her husband and two children, and is enjoying ever-increasing time to write the kind of stories she's always loved. Her published science fiction so far has all been set on alien planets, and often told from alien viewpoints (including reptilian, mammalian, and crustacean analogues.) In writing fantasy, she's attracted to inventive, nonstandard settings, light touches of humor, and just pure adventurous fun. Constance's writing also shows the influence of her love for mysteries.
--

Have you had a chance to read GUILE yet? Do you enjoy torturing your characters? Have you written short stories that you'd like to turn into a novel? Share your thoughts about the interview in the comments!