THE SKYLIGHTER is book two of The Keepers' Chronicles, and we're thrilled to have Becky Wallace swing by to share more about it. 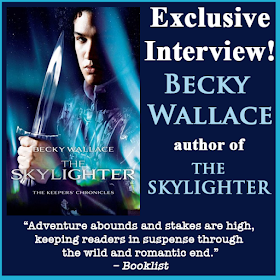 Becky, what scene was really hard for you to write and why, and is that the one of which you are most proud? Or is there another scene you particularly love?

The opening scene was REALLY hard to write. I had a grand, multi-chapter idea about how to move the story forward, and my editor wanted a completely different—and ultimately tighter—direction. I think I rewrote the first fifty pages…ten times? In the end, we trimmed about ten thousand words from that section alone. The heart of what I wanted is still there, while it moves at the pace that my editor hoped for!


What do you hope readers will take away from THE SKYLIGHTER?

The greatest struggle for the characters in this book is knowing where they stand in the world, and what their ultimate importance could be. Are any of us going to lead a rebellion or fight in a major battle? I hope not! I think THE SKYLIGHTER will resonate with people who want to make a difference but are afraid their contribution will fall short.

There were two major things for me: I stopped writing contemporary. I know that sounds awful, but I was only writing contemporary because I was too afraid to write what I love. Fantasy just seemed so DAUNTING. The world building, the magic, the political systems all seemed so much bigger than what I felt I was capable of. My agent, Jennifer Laughran, wisely advised me to figure out what my passion was and follow it. So I did. THE STORYSPINNER was the first Fantasy manuscript I wrote.

The second thing that got me over the speed bumps in my publishing career was that I started writing in third person. The words simply came to me. Sometimes I still write early drafts in first person, just to get a sense of the character, but in the end I always change it over to third.

I have four small children, so I don’t get a ton of writing time. Right now, I get the #quadsquad to bed, finish up the dishes, the laundry, packing the lunches—regular mom stuff—and then I get ready for bed. Yep. You read that correctly. I wash my face, brush my teeth, take out my contacts, turn out the lights, and climb into bed. Then I fire up my trusty iPad and put in my headphones. I struggle to stay focused when I can see crumbs on the floor, or know there may be a pair of socks on the couch. If I can’t see those things, then I can give all my attention to the words on the page. I only write for 60 to 90 minutes every day. Some day I hope to have a little more time to devote to writing, but that season will come. ;)

Find a great critique partner (or a few) that will give you helpful, honest (read: sometimes painful) feedback. Give them the same help in return. My best work has been developed from suggestions of a few people that I trust…and have come to love because of it. Johanna and Rafi are in a race against time to save their country before a power-mad Keeper destroys everything they hold dear in the “enthralling magical world” (Cinda Williams Chima, author of The Heir Chronicles) introduced in The Storyspinner.

As the last of the royal line, Johanna is the only person who can heal a magical breach in the wall that separates her kingdom of Santarem from the land of the Keepers, legendary men and women who wield elemental magic. The barrier protects Santarem from those Keepers who might try to take power over mere humans … Keepers who are determined to stop Johanna and seize the wall’s power for themselves.

And they’re not the only ones. As the duchys of Santarem descend into war over the throne, Johanna relies more than ever on the advice of her handsome companion, Lord Rafael DeSilva. But Rafi is a duke too, and his people come first. As their friendship progresses into the beginnings of a tender relationship, Johanna must wonder: is Rafi looking out for her happiness, or does he want the throne for himself?

With war on the horizon, Johanna and Rafi dodge treacherous dukes and Keeper assassins as they race to through the countryside, determined to strengthen the wall before it’s too late…even if it means sacrificing their happiness for the sake of their world.

In second grade, Becky Wallace had to sit in the corner because she refused to write anything except princess stories and fairy tales (and because she talked too much). Her time in isolation gave her plenty of opportunities to dream up the fantasy worlds she’s been dabbling with ever since. She was lucky enough to find her own real-life Prince Charming. They have four munchkins and live in happy little town near Houston, Texas.

Have you had a chance to read THE SKYLIGHTER yet? Are you following your passion in the correct genre? Do you have critique partners who give you helpful though sometimes painful feedback? Share your thoughts about the interview in the comments!