Amber Smith, author of THE WAY I USED TO BE, on telling stories that might otherwise be suppressed

We're pleased to have Amber Smith here to tell us more about her debut novel THE WAY I USED TO BE. 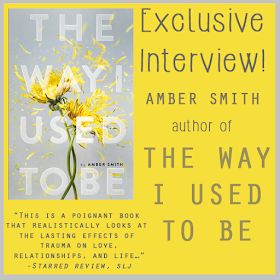 Amber, what was your inspiration for writing THE WAY I USED TO BE?

I’ve always felt inspired to tell the stories that might otherwise be suppressed. I had wanted to write about sexual violence for a long time—it’s a reality for so many young people, yet there’s still so much silence surrounding this issue. As I began to develop this story, I saw a chance to really explore what that silence means and feels like, and ultimately, what it might take to break that silence.

Here are a few of my favorite books—ones I feel especially connected to in regard to THE WAY I USED TO BE—each written by authors I admire greatly: Speak by Laurie Halse Anderson, The Perks of Being a Wallflower by Stephen Chbosky, Thirteen Reasons Why by Jay Asher, Identical by Ellen Hopkins, and All the Rage by Courtney Summers.

What do you hope readers will take away from THE WAY I USED TO BE?

I think the overarching message I’d like to see readers come away with has to do with self-worth, which is something everyone can relate to, regardless of whether or not one has shared in Eden’s particular experience. Having self-worth means knowing that it’s okay to stand up to abuse, in all its forms—even the abuse we sometimes inflict on ourselves. It’s okay to find your voice and use it. And it’s okay to ask for help.


I have another contemporary YA that I’m working on right now (slated for the summer of 2017). It deals with domestic violence, telling the story of three siblings as they cope with the death of their abusive father at the hands of their mother. The Way I Used to Be by Amber Smith
Hardcover
Margaret K. McElderry Books
Released 3/22/2016

In the tradition of Speak, this extraordinary debut novel shares the unforgettable story of a young woman as she struggles to find strength in the aftermath of an assault.

Eden was always good at being good. Starting high school didn’t change who she was. But the night her brother’s best friend rapes her, Eden’s world capsizes.

What was once simple, is now complex. What Eden once loved—who she once loved—she now hates. What she thought she knew to be true, is now lies. Nothing makes sense anymore, and she knows she’s supposed to tell someone what happened but she can’t. So she buries it instead. And she buries the way she used to be.

Told in four parts—freshman, sophomore, junior, and senior year—this provocative debut reveals the deep cuts of trauma. But it also demonstrates one young woman’s strength as she navigates the disappointment and unbearable pains of adolescence, of first love and first heartbreak, of friendships broken and rebuilt, and while learning to embrace a power of survival she never knew she had hidden within her heart.

Amber Smith is a writer and artist who grew up in Buffalo, NY and now lives in Charlotte, NC with her two dogs. After graduating from art school with a BFA in Painting, she earned her MA in Art History. When she’s not writing, she is working as a curator and freelance art consultant. She has also written on the topics of art history and modern and contemporary art. The Way I Used to Be is her first novel.

Have you had a chance to read THE WAY I USED TO BE yet? Are you inspired to tell stories that might otherwise be suppressed? Do you have books you feel connected to while writing your novel? Share your thoughts about the interview in the comments!