Adi Rule, author of THE HIDDEN TWIN, on learning what process works for you

We're delighted to have Adi Rule join us to chat about her latest novel THE HIDDEN TWIN. 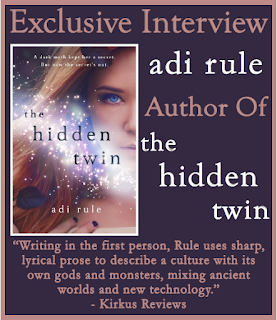 Adi, what scene was really hard for you to write and why, and is that the one of which you are most proud? Or is there another scene you particularly love?

There’s a scene with lots of action and several characters (avoiding spoilers here!) that I reworked a few times. The right beats and pacing are always vital, but especially in action or comedy. It can be tricky to balance the speed at which things are happening with the sensory/spatial/emotional information that needs to be conveyed. I really enjoy sentence-level tinkering, though; that scene ended up being a lot of fun to write.

I tried to up my efficiency game with this novel by attempting to outline and make charts and stuff. But I just ended up consuming more Red Bull than normal (which is an awful lot of Red Bull) and staring at said empty charts and outline tools. Every once in a while, I would tear myself away and draw things with markers. Or go to the store to buy more/better markers. In the end, I learned that I have a process that works for me and it doesn’t involve outlining and charts, although the drawing part was pretty fun.

I love writing with friends, at a café or someone’s living room. Friends + coffee (and baked goods!) + writing time are my favorite! But mostly, I work at home. Silence and solitude keep me focused, as well as the app Freedom, which keeps me from wandering onto the glorious, glorious Internet.

The writing itself, both the process and the ever-imperfect product, is the goal. And the prize. And the joy. Also, don’t let your cats critique your stuff. All they will do is put their butts on your keyboard.

A sequel to “Cinderella” called SHOES. Shoes feature prominently. No, really! It’s funnier and more whimsical than my most recent projects, and I’m having a blast with it. (You can get a sneak preview of SHOES in the spring 2016 issue of Hunger Mountain.) But when she switches places with her sister, striking up a flirtation with the son of the Empress while working in the royal gardens and gets attacked by two suspicious priests on her journey home, she is forced to call forth fire to protect herself, unleashing her previously dormant powers and letting her secret out. She soon catches the attention of a cult with a thousand year old grudge as well as a group of underground rebels, both seeking her for their own gain. But when her sister goes missing and the Redwing uncovers a great plot to awaken Mol and bring fiery destruction upon them all, she is forced to embrace her powers. In Adi Rule's stunning new novel, The Hidden Twin, the girl with no name, must finally choose a name and a path for herself, drawing a line between myth and history to prove herself more than a monster if she is to save both her sister and her home.

ADI RULE grew up among cats, ducks, and writers. She studied music as an undergrad, and has an MFA from the Vermont College of Fine Arts. Adi is a member of, and has been a soloist for, the Tanglewood Festival Chorus, the chorus of the Boston Symphony Orchestra/Boston Pops. She lives in New Hampshire. Strange Sweet Song is her first novel.

---
Have you had a chance to read THE HIDDEN TWIN yet? Are outlines and charts part of your process? Is the writing itself the prize for you? Share your thoughts about the interview in the comments!