Tara Sullivan, author of THE BITTER SIDE OF SWEET, on every book being its own unique journey

We're excited to have Tara Sullivan stop by to tell us more about her latest novel THE BITTER SIDE OF SWEET. 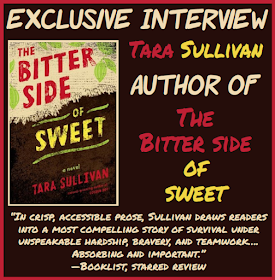 Tara, what was your inspiration for writing THE BITTER SIDE OF SWEET?

THE BITTER SIDE OF SWEET is, unfortunately, based on the reality of the way modern-day chocolate is produced. The Ivory Coast is the source of over 40% of the world’s cacao, from which most mainstream chocolate is made. Sadly, it is an industry dependent on the labor of trafficked children who are forced to work against their will and for no pay. The injustice of children in one part of the world being forced to work as modern-day slaves in order to produce a treat for children in another part of the world is what prompted me to write THE BITTER SIDE OF SWEET.

Patricia McCormick's SOLD, Andy Mulligan’s TRASH, SJ Laidaw’s FIFTEEN LANES, Linda Sue Park’s A LONG WALK TO WATER, Ishmael Beah’s MEMOIRS OF A BOY SOLDIER and Eliot Schrefer’s ENDANGERED come to mind. And, of course, if you like THE BITTER SIDE OF SWEET, you might also like my first book, GOLDEN BOY. :)

Unfortunately, I think I’m finding that the “key” to writing a novel changes for every novel I write. The glass-half-full way to look at this, of course, is that things that are your primary struggles in one book might not be your worst nightmare when you write your next. For example, in my debut, GOLDEN BOY, I really struggled with pacing. For THE BITTER SIDE OF SWEET, I found that pacing came a lot more easily, but it took me a long time to get my character arcs where I needed them to be. In my current work-in-progress I’m struggling with plot problems. That said, I’ve also found that each book came with a gift—something that flowed particularly easily. For GOLDEN BOY it was the figurative language, for THE BITTER SIDE OF SWEET it was how well I felt I knew my characters going in, and for my current WIP it’s setting and imagery. Every book is its own unique journey.

I think the one “key” that remains constant is not giving up. Writing a novel is an incredible amount of work, and you have to sustain your energy for one project over a span of years. When I do school visits, I tell the kids— only write about something that really matters to you: something that makes you really happy or really angry, because you’re going to have to work on it long after you don’t want to anymore and only something that really matters to you will pull you through the rough patches.

My current WIP is another contemporary, set in the mining city of Potosí, Bolivia. It’s about a girl looking for her brother who has vanished under mysterious circumstances into “the mountain that eats men.” It’s a story about family, and how deep you sometimes need to dig to find the treasure inside when your world has fallen to rubble around you. It was prompted by a question to which I have still not found any good answers. For fans of Linda Sue Park and A Long Way Gone, two young boys must escape a life of slavery in modern-day Ivory Coast

Fifteen-year-old Amadou counts the things that matter. For two years what has mattered are the number of cacao pods he and his younger brother, Seydou, can chop down in a day. This number is very important. The higher the number the safer they are because the bosses won’t beat them. The higher the number the closer they are to paying off their debt and returning home to Baba and Auntie. Maybe. The problem is Amadou doesn’t know how much he and Seydou owe, and the bosses won’t tell him. The boys only wanted to make some money during the dry season to help their impoverished family. Instead they were tricked into forced labor on a plantation in the Ivory Coast; they spend day after day living on little food and harvesting beans in the hot sun—dangerous, backbreaking work. With no hope of escape, all they can do is try their best to stay alive—until Khadija comes into their lives.

She’s the first girl who’s ever come to camp, and she’s a wild thing. She fights bravely every day, attempting escape again and again, reminding Amadou what it means to be free. But finally, the bosses break her, and what happens next to the brother he has always tried to protect almost breaks Amadou. The old impulse to run is suddenly awakened. The three band together as family and try just once more to escape.

Tara Sullivan, the award-winning author of the astounding Golden Boy, delivers another powerful, riveting, and moving tale of children fighting to make a difference and be counted. Inspired by true-to-life events happening right now, The Bitter Side of Sweet is an exquisitely written tour de force not to be missed.

Tara Sullivan is the author of the award-winning and critically acclaimed Golden Boy. She was born in India and spent her childhood living in Bangladesh, Ecuador, Bolivia, and the Dominican Republic with her parents, who were international aid workers. She received a BA in Spanish literature and cognitive science from the University of Virginia, and an MA in Latin American Studies and an MPA in nonprofit management from Indiana University. She currently lives with her family in Massachusetts.

Have you had a chance to read THE BITTER SIDE OF SWEET yet? Do you find certain things harder or easier depending on which book you're writing? Are you writing about something that really matters to you? Share your thoughts about the interview in the comments!