“According to Dickens, the first rule of human nature is self-preservation and when I forgive him for writing a character as pathetic as Oliver Twist, I'll thank him for the advice.”


― Melina Marchetta, On the Jellicoe Road 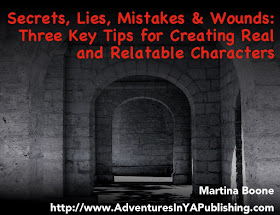 But how do you create a convincing wound? Or one that hasn't been written before a thousand times?

Keep the Wound a Secret

The trick to a convincing wound is in building the backstory that created the emotional wound and in making the character respond to everything in the story through the filter of that wound. But the very fact that a wound is usually a secret makes it more powerful. Any kind of mental or emotional health issue is so often kept secret because any damage that isn't visible is stigmatized. If you fall off a bicycle as a child or break a bone playing football or in gymnastics, the bandages and casts are worn like a badge of honor. If a veteran comes home from Afghanistan with a bullet wound or physical hurt, they are given a Purple Heart. But what about the wounds that people don't see? The wounds that stem from words that shred our sense of safety or self, or the images that can't be forgotten? From experiences that replay in our heads on constant loops?

An emotional wound is no less significant than a broken bone. It stems from an experience, or a series of experiences, so emotionally painful that the trauma from it changes the way we see ourselves and the way that we live our lives. Most often, this happens because we've never acknowledged that the wound exists. That's an instinctive reaction. We flinch when we press a thumb into a bruise. Often, we flinch even before we press a thumb into a bruise. That flinch is the body's way of protecting us from the physical pain, and we are similarly programmed to avoid pressing the emotional buttons that hurt us.

Establish How Ripping off the Bandage Would Have Been Healthier

Ever heard that expression? Ripping the bandage from a physical injury is painful, but removing it is a necessary part of the healing process. Prolonging the inevitable can lead to wounds that fester--and it can prolong the pain. The same is true for emotional wounds. If we avoid dealing with them, we don't give them the opportunity to heal. And we are programmed by society not to deal with emotional wounds. We are told not to cry. We are taught not to talk about them. Openly discussing them--or showing them--makes other people uncomfortable, heaven forbid, so too often, we don't. We go to doctors for help healing broken bones and removing physical scars, but we're still too often stigmatized for seeking help for the hidden scars. And that makes the emotional wounds worse. It makes the infection spread. How did your character's wound begin to fester and why?

You're entering the story at the moment just before she sees the first symptoms. Though she's already infected, she doesn't know it. But then something happens that makes her flinch and raises a bit of pain. She reacts to avoid the pain. Or perhaps she embraces it. Either way, she sees the world in a way that is filtered through the lends of her infection. In her increasingly fevered state, her reaction leads to events that ultimately cause her to keep secrets, tell lies, and make mistakes. What are those secrets and lies? What mistakes will she make? What ENORMOUS mistake will she make that will ultimately break her down and force her--or someone else--to rip off the bandage and begin to clean the wound so that the infection can subside and burn itself out? What choice will she have to make between what she thinks she wants and what she needs in order to heal and move on successfully through life?

Those are the questions that create a powerful character arc. But there are some questions you need to ask before you can even begin to build the story of that infection.

1. How did your character get the wound?

What was the cut or concussion that she covered up and left to fester? How did it happen?

The deepest wounds often involve the people closest to us, family and friends, the people responsible for taking care of us. Strangers don't usually mean enough to matter, but in the same way that repeated small head injuries can create the same or worse neurological damage as a single big concussion, repetition of painful words or experiences can leave a deep and lasting impression. So consider this as you begin to consider your character's wound. Here are a few more questions:
Think of Post Traumatic Stress Disorder. I researched this extensively for Persuasion, and in some respects, all emotional wounds have some of the components of PTSD.


If your character's wound doesn't meet these tests, it's likely not going to work as a sufficiently powerful motivator to create a compelling character arc.

2. How does the wound change the way your character sees herself and the world around her?

“Keep in mind, Eragon, that no one thinks himself a villain, and few make decisions they think are wrong. A person may dislike his choice, but he will stand by it because, even in the worst circumstances, he believes that it was the best option available to him at the time.”
― Christopher Paolini

As the result of her wound, your character tells herself an untruth, something that she believes so firmly that she will flinch away from anything that presses against that point of pressure. She may believe she is not lovable, not attractive, not honest, not important as a person. Or conversely, she may become unable to trust love given to her, focus too much on her appearance, become a chronic liar, become attention-seeking or narcissistic.

3. What are the costs of security versus risk within your story?

“Secrets and lies… Everyone in the world deals with these every day of their lives.
To protect themselves. To protect someone else. It is all in the way that you look at the
situation.”

The above questions are all about the past before your story begins, the backstory. Now amplify those same questions for the events within your story. Change doesn't occur without big pain. The previous deprivations and delusions weren't enough to rip away the bandaid. What will?

Character arc is about change. Big change. Huge change. Forced change.
Thinking about the psychology of your character in this way can help you do create her as a more rounded and real person, and that will automatically make her more relatable to your readers. You'll see for yourself how much more you like her. That may make you feel more protective of her, more defensive on her behalf. But don't let that stop you from being mean to her and inflicting the kind of emotional damage that is going to be required to help her heal. You're going to have to break her down to build her back up. Love her by ripping the bandage off!

Reading about PTSD or mental health in general is a great way to start thinking about some of the very real ways in which emotional damage plays out in our lives and in our modern society. The degree of dysfunction your character experiences may be smaller than an actual mental disorder, but it doesn't hurt to learn about the extremes to help you consider the damage.
Understanding more about character wounds can help, and as always, Writer's Helping Writers by the authors of the Positive Traits Thesaurus and the Negative Traits Thesaurus have some fantastic articles.

And here are a few additional articles you might find interesting:

Do you like emotionally wounded characters with big arcs? What makes you relate to a character as you're reading or writing? What books can you think of that provide a big arc with a huge emotional payoff?