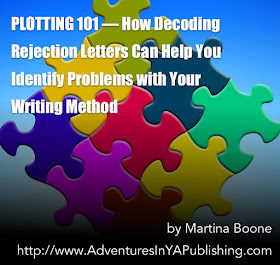 I’ve said it before, but it bears repeating: There’s no single correct way to write. There’s no one plotting method that works for everyone. Anyone who says otherwise is trying to sell you something you don’t need to buy. On the other hand, every book is its own unique puzzle and consciously thinking about the pieces of craft and structure is necessary, not only when you are first starting out as a writer, but also when you are in the intermediate and advanced stages. Thinking about craft during revision is also helpful because it allows you to more easily identify the big picture issues that may be holding your novel back.

That doesn’t mean that you have to use a particular plotting method, or that you have to start out plotting at all. Eventually, you’ll find your own hybrid method that works for you, and there are pros and cons to plotting as well as to pantsing. In fact, I suspect there’s a high correlation between plotting methods and problems that come to light in the query trenches. You may already have encountered some of these, and looking at the responses you've had from agents or editors--or critique partners--can help identify ways in which your planning method--or lack thereof, perhaps--is letting you down.

It’s tempting, in the first electric rush of creation, to just let the words flow and see where they will take you. That’s pantsing, and it’s FUN, but you may end up with a story that may not work at all, and you may find it very difficult to see where the story has derailed. That’s the type of story that often:
In other words, it’s the type of story that will often end in rejection. If the writer is talented, it will get praise, and it may seem to come “close” but it will still get rejected, and the writer will then spend years revising and tweaking and fine-tuning—or doing complete rewrites. Ultimately, there may or may not be success, but it’s a long and tedious journey.

On the other extreme, someone who follows a particular plotting “pattern” or uses a specific tool too slavishly is liable to end up with a book that gets rejected for completely different reasons:

The key to solving all these problems is to find a character you know and love, a story that inspires you deeply, and a problem that is universal enough to interest a lot of different people. Of course that’s easier said than done, but even when you have all that, you still need to follow certain conventions of storytelling to meet (and then subvert) reader expectations. Lisa Cron in her book, WIRED FOR STORY, explains the need for that extremely well, and I highly recommend that as a quick read if you’re thinking about plot at all.

As with everything, the bottom line is that every writer eventually finds their own balance between plotting and pantsing, and that may also change from book to book. When we’re first starting out, we need the formula to give us a starting point. Eventually, we rely on that formula less and less, but it’s also hardwired into our brains by then, and we begin to use it without being aware we’re doing so.

Even if you are purely a pantser, and you don’t want to spend time doing the boring work of planning, it is helpful to understand the different methods that are out there. Here’s a quick overview of some of the best methods to get you thinking about your book in analytical ways either before you write or as you start the revision process.

I’m going to examine all of this in more detail in the coming weeks, but as a quick overview, it’s helpful to understand that not much has changed in fiction since Aristotle first wrote The Poetics roughly 3000 years ago. In 1863, Gustav Freytag applied Aristotle's work to a universal theory on plotting drama, which is now called Freytag's Pyramid. At its most basic level, virtually any work of fiction, in whatever medium, and whatever genre, needs a beginning, a middle, and an end. You can break that down into three acts, in theatrical or film terms, and given the important influence of film on novels and vice versa, it helps many writers to think of those because modern readers are so heavily influenced by film and television.

The beginning of a work of fiction--the set-up or exposition--is about 25 to 35 percent of the novel, the middle is about fifty percent broken into two sections separated by the climax, and the end--the resolution or denouement--which is about 15 to 25 percent. For that reason, you can sometimes hear people break that three act structure into four separate acts.

But we need to break it down even further.

Regardless of how you organize it, plot is a series of causally connected events within the story. The key in that sentence is "causally connected." In other words, something happens, which leads to something else happening, which leads to something else. That’s the events sequence. But each of those things must also have emotional impact, and in the best stories, the events that occur stimulate emotional reactions from the characters, which spur them into decisions that lead to action and a new event. And so on.

In theory, you could therefore start a story with any event, and in any way, and it will create a plot.

But a story needs more than just any plot. It needs a plot that people will understand and relate to, a plot that moves neither so slowly that people will tire of it nor so quickly that they can’t feel for the characters involved. A good plot needs action, heartache, and places for readers or viewers to catch their breath and reduce their heart rates. All that is a little bit more complicated than simply writing out a sequence of events.

Total pantsing, for this reason, is risky—especially for beginning writers. Why reinvent the wheel when people have been building them since before Aristotle’s time?

In the coming weeks, I’m going to go back to the basics of plot and look at the different schools of thought and the different techniques that various writers have used, as well as some of the key theories behind the techniques. I’m at the point in my own WIP where the reinforcement is going to do me good, and I hope it will help you as well!

What’s your favorite planning method? Or do you have a particular plotting technique you’ve wondered about and would like to see dissected?

Martina Boone is the author of Compulsion and Persuasion, out now in the romantic Southern Gothic Heirs of Watson Island trilogy from Simon & Schuster, Simon Pulse. Illusion, the final book, will be out in October of 2016. Martina is also the founder of AdventuresInYAPublishing.com, a three-time Writer's Digest 101 Best Websites for Writers Site, and YASeriesInsiders.com, a site dedicated to encouraging literacy and reader engagement through a celebration of series literature. She's on the Board of the Literacy Council of Northern Virginia and runs the CompulsionForReading.com program to distribute books to underfunded schools and libraries.
Martina Boone at 10:57 AM