DREAMFEVER is the second book in The Dream Walker Trilogy, and we're delighted to have Kit Alloway here to chat about it. 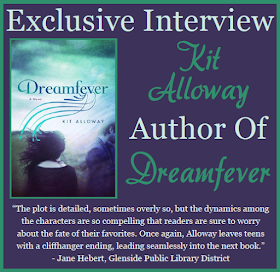 Kit, what scene was really hard for you to write and why, and is that the one of which you are most proud? Or is there another scene you particularly love?

The nightmares in which Josh and Feodor interacted were very difficult because I had to write Feodor through Josh’s eyes. Her feelings toward him are complicated—one the one hand, she loathes him for what he did to her and her friends, but she also admires his genius and feels compassion for what he’s been through. That’s a lot to juggle. I am proud of those chapters.

How long did you work on DREAMFEVER?

I worked on Dreamfever for about three years. It wasn’t the easiest book to write.

The big thing I learned was to stop obsessing over plotting and just write. I was so worried about making everything fit together perfectly that I’d convince myself I had to have the next ten chapters plotted out before I could begin writing. It turns out I don’t work that way, but I’d written most of the book before I figured that out. The last five chapters I finally just sat down and wrote with no idea where I was going.

It took me sixteen years to sign my first contract, and nineteen years before my first novel came out. I think I wrote . . . nine unpublished novels? And probably a hundred short stories, none of which I’ve published. But I don’t regret a page. There’s no better way to learn to write than to do it.

I think that learning to edit was a huge moment for me. I had to realize that a first draft is nothing like a final draft, and that the bulk of the work comes in between.

Over time I’ve become more and more flexible about how I write. In an ideal world, I’d write in my office, with a couple of candles burning and familiar music playing. But I’ve learned to write on the couch, in the kitchen, on planes, in cars, at coffee shops, pretty much anywhere. As long as I have my noise-cancelling headphones and my laptop, I’m good.

I am editing the third novel in the Dream Walker trilogy. It’s bittersweet; I’ve been writing these characters for so long. But I’m looking forward to trying something new as well. Kit Alloway writes primarily for young adults, having always had an affection for teenagers. In addition to writing, she plays various musical instruments, decorates cakes, mixes essential oils, and studies East European languages. She lives in Louisville, KY with her family and four very tiny dogs. Dreamfire is her debut novel.


Have you had a chance to read DREAMFEVER yet? Do you spend too much time obsessing over plot? Do you spend 80% of your time editing the novel? Share your thoughts about the interview in the comments!