Hannah Barnaby, author of SOME OF THE PARTS, on honoring your writing process

We're delighted to have Hannah Barnaby join us to share more about her latest novel SOME OF THE PARTS. 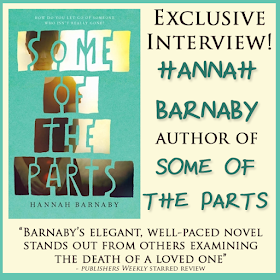 Hannah, what was your inspiration for writing SOME OF THE PARTS?

SOME OF THE PARTS was inspired by my own experience. In 1999, my younger brother Jesse died suddenly and, while the circumstances were quite different than what happens in the book, the emotional process was very much the same. I wanted to write a book that would have helped me back then, a book that said, "Everything you're feeling is what you need to feel. You will get through this. And you will be changed."

Writing SOME OF THE PARTS taught me two big things: 1) to honor my writing process, and 2) to face my fears.

1) When I'm writing a novel, the entire first draft is all about getting to know the characters. My novels are character-driven, rather than plot-driven, and it takes me a long time to understand who the characters are, what they want, and how they feel about each other. I've tried outlining and plot workshops and all kinds of other tricks to save myself all this work, but with SOME OF THE PARTS, I finally accepted that my process is my process and I'm proud of the stories that come out of it.

2) I was terrified to write this book. I knew it would bring up all the sadness I felt when I lost my brother and I really tried to avoid dealing with that. In the first draft, I had Tallie experiencing hallucinations, seeing her brother and talking to him (and hearing him talk back) so she wouldn't have to go through the story alone. But eventually I cut those scenes and rewrote them in a way that made Tallie stronger, and that was really cathartic. For both of us.

What do you hope readers will take away from SOME OF THE PARTS?

So many of us have lost important people and while the details of our losses are all different, I think the journey is universal. If you're grieving a recent loss, or an old one, I hope this book helps you feel less alone. If you're lucky enough not to have gone through something like this, I hope it helps you understand someone who's having a hard time. More than anything, I want readers to know that it's okay if you're not "all better" or "back to normal" after something hard happens to you. You'll find a new normal. I promise. Sometimes bad things happen, and we are not the same when they are over.

For months, Tallie McGovern has been coping with the death of her older brother the only way she knows how: by smiling bravely and pretending that she's okay. She’s managed to fool her friends, her parents, and her teachers so far, yet she can’t even say his name out loud: “N—” is as far as she can go. But when Tallie comes across a letter in the mail, it only takes two words to crack the careful façade she’s built around herself:

Two words that had apparently been checked off on her brother’s driver’s license; two words that her parents knew about—and never confided to her. All at once, everything Tallie thought she understood about her brother’s death feels like a lie. And although a part of her knows he’s gone forever, another part of her wonders if finding the letter might be a sign. That if she can just track down the people on the other end of those two words, it might somehow bring him back.

Hannah Barnaby’s deeply moving novel asks questions there are no easy answers to as it follows a family struggling to pick up the pieces, and a girl determined to find the brother she wasn’t ready to let go of.

Hannah Barnaby has worked as a children’s book editor, a bookseller, and a teacher of writing for children and young adults. She holds an MA in children’s literature from Simmons College and an MFA in writing for children and young adults from Vermont College. Her first novel, Wonder Show, was a William C. Morris nominee. Hannah lives in Charlottesville, Virginia, with her family.

Have you had a chance to read SOME OF THE PARTS yet? Have you used a deeply personal experience to inspire a novel? Do you honor and accept your writing process? Share your thoughts about the interview in the comments!