Bonnie-Sue Hitchcock, author of THE SMELL OF OTHER PEOPLE'S HOUSES, on trusting others in publishing

We're pleased to have Bonnie-Sue Hitchcock stop by to tell us more about her debut THE SMELL OF OTHER PEOPLE'S HOUSES. 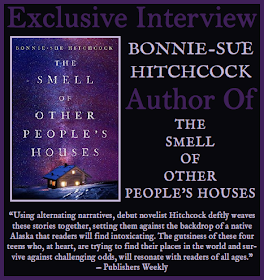 Bonnie-Sue, what do you hope readers will take away from THE SMELL OF OTHER PEOPLE'S HOUSES?

Originally I thought the book was going to be a collection of linked short stories. My background is writing for radio, so I think my tendency is to write short, powerful sentences that pack a lot of information into a very small space. (think 4 minute radio piece) The title was a spin off the idea that the reader might feel like they had just opened the door of someone else's house and gotten a whiff of what it was like to be that person. I do hope that is still true, in this longer format. I hope it's a glimpse into a life that maybe the reader hadn't experienced before. Or if it resonates, perhaps it mirrors the reader’s world, if they grew up in the place I did. Either way, I hope it's an enjoyable read.

How long did you work on THE SMELL OF OTHER PEOPLE'S HOUSES?

I wrote most of the original version of the book as part of my creative thesis at Hamline University, where I received an MFA in writing for Children and Young Adults. The first draft of the book was done in six months. After it sold, I revised it with the editors for another year and a half. So, I'd say a good two years start to finish. Plus, it's a very different book now than what I started with.

I think my road to publication was unusual. I have written many short stories and essays and radio pieces so that was just kind of what I did and I was never thinking about a novel. I still am amazed that this book is a novel. After working in radio for fifteen years I decided to get an MFA in the thing that I've loved all my life and that's books for teens. We are avid readers at my house and one of my sisters is a middle school librarian, so books are the thing we really are most passionate about. I started thinking about trying to get published while at Hamline. I found an agent and it went quite quickly from there. I wasn't expecting that at all.

Can I just say the answer to this is "No?" I still don't have the key to writing a novel at all. If anything, I think I realized how important the editorial process is because like I said, my journey was unusual. My novel sold based on only five chapters and so I worked very closely with editors while finishing the book. I'm not sure I could have done it without so many talented people who understood the process. Writing is lonely and solitary, but at some point you have to trust people who are smarter than you and have been in this business a long time. I think it's important to believe in your writing and your voice, but it's also important to admit that maybe you don't know everything when it comes to publishing. Especially if it's your first book.

If you really want to write, the only thing any of us can control is how good the writing is. Everything else is just background noise so stay focused on the writing. That's the most important part of the whole process. In Alaska, 1970, being a teenager here isn’t like being a teenager anywhere else. This deeply moving and authentic debut is for fans of Rainbow Rowell, Louise Erdrich, Sherman Alexie, and Benjamin Alire Saenz. Intertwining stories of love, tragedy, wild luck, and salvation on the edge of America’s Last Frontier introduce a writer of rare talent.

Ruth has a secret that she can’t hide forever. Dora wonders if she can ever truly escape where she comes from, even when good luck strikes. Alyce is trying to reconcile her desire to dance, with the life she’s always known on her family’s fishing boat. Hank and his brothers decide it’s safer to run away than to stay home—until one of them ends up in terrible danger.

Four very different lives are about to become entangled. This unforgettable book is about people who try to save each other—and how sometimes, when they least expect it, they succeed.

Bonnie-Sue Hitchcock was born and raised in Alaska. She worked many years fishing commercially with her family and as a reporter for Alaska Public Radio stations around the state. She was also the host and producer of “Independent Native News,” a daily newscast produced in Fairbanks, focusing on Alaska Natives, American Indians, and Canada’s First Nations. Her writing is inspired by her family’s four generations in Alaska.

Have you had a chance to read THE SMELL OF OTHER PEOPLE'S HOUSES yet? Have you ever had short stories turn into a novel? Are you able to trust people who have been in the business a long time? Share your thoughts about the interview in the comments!