To Outline or Not to Outline? by Laura J. Burns & Melinda Metz

We are lucky today to present you with a guest post by not just one but two amazing authors! Laura and Melinda are the dynamic writing/editing duo behind the Roswell High series as well as some Buffy the Vampire Slayer novels. Together, they have double the insight into plotting and outlining. We hope you'll find some inspiration from their post. And be sure to check out their upcoming release, Sanctuary Bay, at the end!

To outline or not to outline?

For us, that's not really the question. Each of us has written one book on our own without doing an outline first. That's all it took, in the 15+ years we've been writing. Once through without an outline was such a horrifying experience that we've never done it again. You'll notice that we said we did it "on our own"—as in, Melinda did it on a book she wrote by herself, and so did Laura. Together, we've never made that mistake. That's probably one of the best things about being writing partners. We didn't have to learn this lesson the hard way!


Writers talk about whether they are pantsers (who fly by the seat of their pants) or plotters (who plan everything out). We’re plotters. Before we write one word we make a chapter-by-chapter outline. Sometimes it's a scene-by-scene outline, even. Over the years, we've streamlined our writing process: When the outline is finished, we split the book in half and write it simultaneously. The one writing the second half doesn’t wait for the one writing the first half to finish. That means we both need to know where the book is going, and how it's getting there—one of us is setting something up in chapter three that the other one is busy bringing to fruition in chapter fifteen.

"But that's so constricting!" say our writer friends who hate outlines. More than a few of them prefer to let their characters tell them what should happen as they write. They assume that when we make an outline, we're shutting off the ability to let our characters grow organically.

We don't find that to be the case. The outline isn't only plot. There's also character—we simply don't know how to plot a book without spending most of our development time figuring out who the characters are. We work on the story a little, then work on the character a little. Sometimes what we come up with for the story changes the character. Sometimes the way we’re fleshing out the character means we’ll need to change the story. It’s a chicken and egg kind of thing. We don't really do "plot-driven" books or "character-driven" books. What we're going for is some unholy union of both. (Whether we get there or not is up to the reader to decide.)

The characters still grow in surprising little ways during the actual writing process. And the plot changes here and there, too. In fact, we frequently find ourselves railing against the idiots who wrote the outline, since they’d clearly missed some very large plot holes! But we'd rather have plot holes in an outline than in a first draft, if only because it hurts less to fix them. We don't have to jettison fifty pages of fully realized scenes; we just have to stop writing, get back on the phone, and go through our procrastination/complaining/re-outlining process again until it's fixed. In that way, our outline is sort of like a first draft, and that makes our first draft sort of like a revision. Which ends up making the actual revision even easier! And, let's hope, makes the finished book better too. 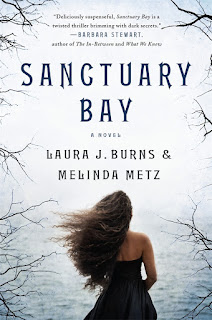 When Sarah Merson receives the opportunity of a lifetime to attend the most elite prep school in the country-Sanctuary Bay Academy-it seems almost too good to be true. But, after years of bouncing from foster home to foster home, escaping to its tranquil setting, nestled deep in Swans Island, couldn't sound more appealing. Swiftly thrown into a world of privilege and secrets, Sarah quickly realizes finding herself noticed by class charmer, Nate, as well as her roommate's dangerously attentive boyfriend, Ethan, are the least of her worries. When her roommate suddenly goes missing, she finds herself in a race against time, not only to find her, but to save herself and discover the dark truth behind Sanctuary Bay's glossy reputation.

In this genre-bending YA thriller, Sanctuary Bay by Laura J. Burns and Melinda Metz, Sarah's new school may seem like an idyllic temple of learning, but as she unearths years of terrifying history and manipulation, she discovers this "school" is something much more sinister.