Melissa Gorzelanczyk, author of ARROWS, on focusing on writing a new book

We're pleased to have Melissa Gorzelanczyk swing by to tell us more about her debut novel ARROWS. 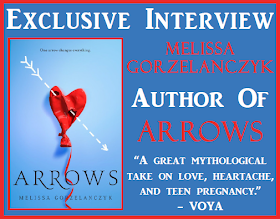 Melissa, how long did you work on ARROWS?

I started the first draft of ARROWS in October 2012. I finished in January and started the revision process—a few passes on my own, then sending it to beta readers for critique. By September 2013, I had started to query agents. I found mine, Carrie Howland of Donadio & Olson, via the #PitMad pitch contest at the end of September 2013, and in January 2014, she sold my book to Delacorte Press.

I guess the greatest writing takeaway would be to write the next book. When I started working on ARROWS, I was querying a different YA book which I later shelved. I’m glad I focused on writing a new book—ARROWS—rather than obsessively refreshing my email inbox.

Well first, coffee. After that, I start each morning in my home office with a little meditation and yoga. There’s nothing mystical about this—I meditate because I tend to be a worrier, and meditation helps center me. I practice yoga because I’m inflexible and sore if I don’t.

If I’m drafting or revising, I have a rule of not turning on my phone or checking email until lunchtime. As I drew closer to launch, my afternoons (and some evenings and weekends) were spent trying to figure out promotion for ARROWS.

Focus on the writing. A modern cupid story set in present-day Wisconsin combining the fantastical elements of Greek mythology with the contemporary drama of MTV's Teen Mom.

People don’t understand love. If they did, they’d get why dance prodigy Karma Clark just can’t say goodbye to her boyfriend, Danny. No matter what he says or does or how he hurts her, she can’t stay angry with him . . . and can’t stop loving him. But there’s a reason why Karma is helpless to break things off: she’s been shot with a love arrow.

Aaryn, son of Cupid, was supposed to shoot both Karma and Danny but found out too late that the other arrow in his pack was useless. And with that, Karma’s life changed forever. One pregnancy confirmed. One ballet scholarship lost. And dream after dream tossed to the wind.

A clueless Karma doesn’t know that her toxic relationship is Aaryn’s fault . . . but he’s going to get a chance to make things right. He’s here to convince Danny to man up and be there for Karma. But what if this god from Mount Olympus finds himself falling in love with a beautiful dancer from Wisconsin who can never love him in return?

This fast-paced debut novel explores the internal & external conflicts of a girl who finds herself inexplicably drawn to a boy who seemingly doesn't reciprocate her feelings, touching on the issues of love, sex, and responsibility, with a heroine struggling to control her destiny--perfect for fans of Katie McGarry's novels and MTV’s 16 and Pregnant. Melissa Gorzelanczyk is a former magazine editor and columnist who believes love is everything. A dreamer for life, Melissa has been writing books since she was nine years old when she penned her first story about a beloved black horse. She is a member of the Class of 2k16, the SCBWI and The Sweet Sixteens. She lives in Green Bay, Wisconsin, with her husband and family.


---
Have you had a chance to read ARROWS yet? Are you able to work on the next book while querying? Do you have a routine before writing? Share your thoughts about the interview in the comments!