It's a bit of a slow week for new releases this week, but the books that are coming out are truly amazing ... and we have two great giveaways - COME BACK TO ME by Mila Grey, and WANDERING STAR by Romina Russell! 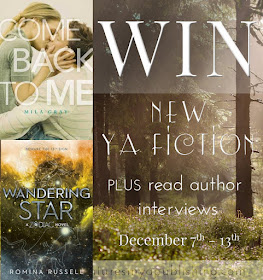 Come Back to Me
by Mila Gray
Hardcover Giveaway
U.S. Only
Simon Pulse
Released 12/8/2015

Author Question: What is your favorite thing about Come Back to Me?

When I was writing the book the one thing I loved the most about it was the romance between the two main characters. I was really tired of reading about alpha bad boys with control issues and I wanted to draw a male character who I felt managed to be both strong and gentle, assertive but kind, sexy and sensitive. I think in Kit I managed to do that. He’s all sorts of sexy, definitely one of my best leading men.

When the book came out in the UK it became a bestseller. It even knocked Fifty Shades off the top spot for a time! From the reviews, I know that people found the relationship at the heart of the book really believable and heart-felt and they were drawn into the tragedy that occurs (have tissues at the ready!). I love it that the book makes people cry - that’s a sure fire sign you’ve made the characters real and invested people in the story. But I also love that it makes people really think about war and what it means for the people left behind at home. Author Question: What is your favorite thing about Wandering Star?

I’m equal parts thrilled and terrified to share WANDERING STAR's worlds, themes, and characters with ZODIAC's readership. My favorite thing about this sequel is how personal it feels to me. I suffered a terrible loss while working on the book’s first draft, and I found myself pouring into its pages all my heartache, outrage, regret, despair, desolation, devastation...and love. And somehow, by the last word, I found hope.

All We Left Behind by Ingrid Sundberg - Jennifer S.
Not If I See You First by Eric Lindstrom - Heather W.
Virtually in Love by A. Destiny and Catherine Hapka - Joycedale C. Instructions for the End of the World
by Jamie Kain
Hardcover
St. Martin's Griffin
Released 12/8/2015

From the author of The Good Sister comes a gripping novel about two sisters who learn that there are things in life—love, loss, and self-discovery—that you simply can't prepare for.

He prepared their family for every natural disaster known to man—except for the one that struck.

When Nicole Reed’s father forces her family to move to a remote area of the Sierra Foothills, one without any modern conveniences, it's too much too handle for her mother, who abandons them in the middle of the night. Heading out to track her down, Nicole’s father leaves her in charge of taking care of the house and her younger sister, Izzy. For a while, Nicole is doing just fine running things on her own. But then the food begins to run out, the pipes crack, and forest fires start slowly inching their way closer every day. Wolf, a handsome boy from the neighboring community, offers to help her when she needs it most, but when she starts to develop feelings for him, feelings she knows she will never be allowed to act on once her father returns, she must make a decision. With her family falling apart, will she choose to continue preparing for tomorrow’s disasters, or will she take a chance and really start living for today?

Instructions for the End of the World is a gripping, young adult novel that explores family, friendship, and love in the midst of the most difficult and dangerous circumstances. Teen Sherlock battles a monstrous adversary on a mission to Ireland with his brilliant brother, Mycroft. Young Sherlock is thrown into a tangled web involving a spiritualist whose powers have attracted the attention of governments around the world. At the castle where the medium is demonstrating his "gift," Sherlock finds a household in turmoil. Servants and some of the guests are frightened but who--or what?--has terrified them so much that nobody will speak out? Young Sherlock must bring all his powers of deduction to bear in unraveling his greatest mystery yet. With her trusty baton and six insanely organized clipboards, drum major Liza Sanders is about to take Destiny by storm—the boat, that is. When Liza discovered that her beloved band was losing funding, she found Destiny, a luxury cruise ship complete with pools, midnight chocolate buffets, and a $25,000 spring break talent show prize.

Liza can’t imagine senior year without the band, and nothing will distract her from achieving victory. She’s therefore not interested when her old camp crush, Lenny, shows up on board, looking shockingly hipster-hot. And she’s especially not interested in Russ, the probably-as-dumb-as-he-is-cute prankster jock whose ex, Demi, happens be Liza’s ex–best friend and leader of the Athenas, a show choir that’s the band’s greatest competition.

But it’s not going to be smooth sailing. After the Destiny breaks down, all of Liza’s best-laid plans start to go awry. Liza likes to think of herself as an expert at almost everything, but when it comes to love, she’s about to find herself lost at sea.