WANDERING STAR is the second book in the Zodiac series, and we're excited to have Romina Russell here to tell us more about it. 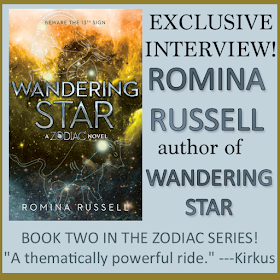 Romina, what do you hope readers will take away from WANDERING STAR?

If ZODIAC dealt mostly with universe-building, WANDERING STAR is all about character. My biggest hope for readers who pick up this book is that they’re reminded that even people who think differently than they do deserve to be heard. And above all, I hope they enjoy themselves!

My road to publication felt endless, but in technical terms, it took ten years. ZODIAC was my first published novel, and even before I started writing it, I'd already completed five full-length manuscripts, including one that I re-wrote entirely at least four times—and I’m actually working on a fifth iteration of that very story now! Apparently, I don’t give up on characters easily…not even when they’re driving me CRAZY.

Trust Yourself. No one else can tell you what your story is—your teachers can’t, your parents can’t, your friends can’t, your editor can’t, your favorite book can’t, and I can’t—because only you know the stories you carry in your heart. If you give up on them, no one else will ever hear them. So take a page from Rho, and when your world goes black, let your inner light burn even brighter. Have you had a chance to read WANDERING STAR yet? How many times have you completely rewritten a story you believe in? Have you learned to trust yourself when writing?