Mila Gray, author of COME BACK TO ME, on writing something with lots of heartbreak

We're thrilled to have Mila Gray join us to share more about her novel COME BACK TO ME. 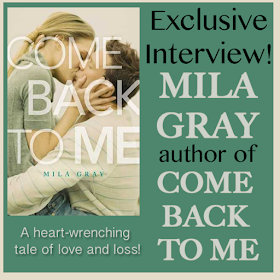 Mila, what was your inspiration for writing COME BACK TO ME?

My first book, which is a young adult book written under my real name Sarah Alderson, is called Hunting Lila. It’s actually casting at the moment and is going to be a movie (very exciting!). That book was set near to San Diego and two of the main characters worked on the Marine base near to there. When I was asked to write a book for a slightly older audience I immediately thought about that setting. I wanted to write something compelling and real with loads of heartbreak and war and its affects are something I’m very interested in.

I knew I wanted to write something with lots of heartbreak but also something that captured the thrill of an illicit first love. I wanted all the feels! I discovered that I’m really good at writing hot sex… which is somewhat embarrassing. I’ve had to ban my parents from reading my Mila Gray books. They’re a bit too risqué.

How long did you work on COME BACK TO ME?

Funnily enough I wrote this book in six weeks as that was all the time my publisher gave me to do it. They wanted to publish it in the summer and that meant a very fast turn around. Normally I average about 12 weeks per book.

I’m now working on more screenplays than books. This year has been quite amazing as the Hunting Lila movie has been casting and I’ve been doing a lot of work on the script (I adapted it) working alongside an Oscar-winning director.

A major TV broadcaster in the UK has also optioned The Sound (one of my young adult books) and I’m co-writing that as well. Hopefully it will be a TV series soon enough (it’s set in Nantucket).

On top of all that I’ve also had 5 books out this year, including my second Mila Gray book (out in the UK), so I’ve been doing a lot of PR and book signings around the county which has been fun. I’ve not had any time to write any new books though which is the downside. I’m waiting to see what happens with the TV and film projects before I decide what to write next. And I’m also giving myself a break after five solid years of writing. I wrote 14 books in that time (10 of which have been published). But what was just supposed to be a summer romance develops into something far greater than either of them expected. Jessa’s finally found the man of her dreams and Kit’s finally discovered there’s someone he’d sacrifice everything for. When it’s time for Kit to redeploy, neither one is ready to say goodbye. Jessa vows to wait for him and Kit promises to come home to her. No matter what.

Mila Gray is the pen name for Sarah Alderson, author of Hunting Lila, Losing Lila, The Sound, Fated and Out of Control. Originally from London she has lived in Bali for the last four years with her husband and daughter. As well as writing young adult fiction under the name Sarah Alderson and adult fiction under the name Mila Gray, she also writes screenplays. You can find out more at www.milagray.com and on facebook: www.facebook.com/sarahjalderson.

Have you had a chance to read COME BACK TO ME yet? Have you read any of her books under her real name Sarah Alderson? Can you imagine writing 14 books in five years?