Letting Your Characters Speak Through You by Shaun David Hutchinson

We're so thrilled to welcome Shaun David Hutchinson back to the blog today. Shaun is an author who's not afraid to explore the darkest depths of his story and the pain of his characters. Today, Shaun gives us some insight into how he gets his characters to speak in such strong voices...by listening and letting them speak through him. After you enjoy his post, be sure to check out his upcoming release below, We Are the Ants.

Let Your Characters Speak: A Craft of Writing Post by Shaun David Hutchinson

Understanding character voice requires understanding your characters. Who they are, where they come from, the experiences that have shaped them. Think about who you are. You are the sum of your experiences. Of the years and hours that you've lived through. The things you love, the things you fear, the moments that terrified you, and the ones that broke you to pieces. You are a patchwork quilt. Each new experience informs how you view the world. The same goes for your characters.

The difference between you and a character is that you are always living in the present. Your past is always behind you. When it comes to a character, you have to develop their past. Where did your character grow up? What fascinates them? What scares them? Are their parents divorced? Are they religious? Did they grow up in a religious household? Were they read to as children? What are their comfort foods? What informs their worldview? What were their favorite toys as kids? No detail is inconsequential.

When I was three or four (it changes depending on who I ask), I nearly electrocuted myself when I found a screwdriver and attempted to take apart the clothes dryer in our garage. It seems like a silly anecdote, a funny little story. But here I am at 37 and one of my favorite things to do is take apart and repair machines. I view them as problems to be solved. And I view most things that way. Whether it's computer code or a troublesome plot or even people. I look for ways to take apart and fix the world around me. I can trace how I approach the world all the way back to my near-fatal experimentation as a toddler. That one incident informs how I view the world.

My next book is called We Are the Ants, and it's about a young man named Henry who thinks he's an alien abductee. His world is chaos, so he clings to science as a way to bring order to his world. Everything he does is viewed through that scientific lens. He imagines the past as viewed from far flung stars. He considers the gravitational force between himself and the boy he's making out with. Science is ingrained in Henry's voice. It's who he is.

Creating an authentic character voice is about more than speech patterns and slang—those things are important, however I remain skeptical about the use of slang, which can quickly date a book—it's about creating an authentic character and then allowing that character to speak honestly. Before you can discover the world through your character's eyes, you have to discover your character. You have to set aside your own voice, your own experiences, and let your character do the talking without reservation, without hesitation. Let them speak their truths, warty sentiments and all.

In my opinion, character voice is one of the most difficult aspects of a book to get right. It requires getting out of your own head and seeing the world through the eyes of another person. Slipping into their skin and thinking about how they view the world, how they would react, what they would say in each and every moment. But I also believe it's the most important part of a book, and worth doing well. Don't try to speak through your characters, let your characters speak through you. 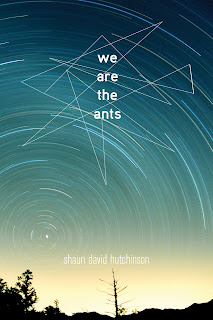 From the “author to watch” (Kirkus Reviews) of The Five Stages of Andrew Brawley comes a brand-new novel about a teenage boy who must decide whether or not the world is worth saving.

Henry Denton has spent years being periodically abducted by aliens. Then the aliens give him an ultimatum: The world will end in 144 days, and all Henry has to do to stop it is push a big red button.

Only he isn’t sure he wants to.

After all, life hasn’t been great for Henry. His mom is a struggling waitress held together by a thin layer of cigarette smoke. His brother is a jobless dropout who just knocked someone up. His grandmother is slowly losing herself to Alzheimer’s. And Henry is still dealing with the grief of his boyfriend’s suicide last year.

Wiping the slate clean sounds like a pretty good choice to him.

But Henry is a scientist first, and facing the question thoroughly and logically, he begins to look for pros and cons: in the bully who is his perpetual one-night stand, in the best friend who betrayed him, in the brilliant and mysterious boy who walked into the wrong class. Weighing the pain and the joy that surrounds him, Henry is left with the ultimate choice: push the button and save the planet and everyone on it…or let the world—and his pain—be destroyed forever.

Shaun David Hutchinson is the author of The Deathday Letter, fml, The Five Stages of Andrew Brawley, and We Are the Ants, and the editor of the school shooting anthology Violent Ends. He lives with his partner and dog in South Florida and watches way too much TV.