GIVEAWAYS and New Releases for this Last Week of 2015

It's the last Monday of 2015! Next week, we'll be bringing you new releases from a whole new year. There are loads of new titles to look forward to in 2016, including some stunning debuts... but for now, it's all about these amazing new releases gracing the last few days of 2015. Read, enjoy, and don't forget to enter the giveaway! 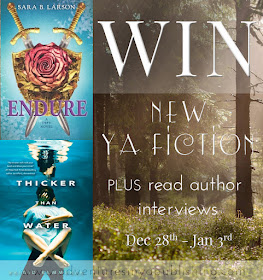 Acclaimed author Sara B. Larson has woven a stunning, romantic, and evocative finale to the Defy trilogy, that is sure to leave readers breathless until the very last page.

Author Question: What is your favorite thing about Endure?

I can’t answer this candidly without also being spoilery, so I will just say that writing the conclusion to Alexa’s story—the ending I’d been preparing for and plotting for years—was an experience I’ll never forget. I was definitely very emotional while writing this whole book (especially certain scenes), but the last few chapters were especially poignant and powerful. It was satisfying but yet so very bittersweet to write the ending to this series. Thomas Bellweather hasn’t been in town long. Just long enough for his newlywed mother to be murdered, and for his new stepdad’s cop colleagues to decide Thomas is the primary suspect.

Not that there’s any evidence. But before Thomas got to Garretts Mill there had just been one other murder in twenty years.

The only person who believes him is Charlotte Rooker, little sister to three cops and, with her soft hands and sweet curves, straight-up dangerous to Thomas. Her best friend was the other murder vic. And she’d like a couple answers.

Answers that could get them both killed, and reveal a truth Thomas would die to keep hidden… Kassandra Black used to get away with things. She was her high school’s anonymous vigilante, exposing bullies and predators. But when she’s expelled for breaking into another student’s car just weeks before graduation, her acceptance to Columbia is revoked.

Now her future depends on behaving herself for the summer at Henley University under the watchful eye of her great-uncle Brian. If she successfully assists him in his HEAR program (Henley Engineering Anomalies Research), and if he puts in a good word for her, she can at least go to college somewhere.

As Kass gets to know the four other HEAR students, she realizes that she overlooked the “Anomalies” part of their acronym. They’ve all been recruited to help Brian run experiments that gauge Extrasensory Perception—including, to her astonishment, Kass herself. But Kass would know if she were psychic, right? Alexis Bass’s heartbreakingly beautiful second novel is a tale of love, loss, and learning to forgive, perfect for fans of Gayle Forman and of Robyn Schneider's The Beginning of Everything.

A year and a half ago, Amanda Tart's brother got behind the wheel drunk and killed his best friend. Today, he's coming home from prison.

Amanda's been the one living with the fallout, made worse by her brother's recent unapologetic TV interview. People think he's a monster. Still, she loves him. It's her dark secret, until she starts getting close to Henry again--whose sister is paralyzed from the accident.

A year and a half ago, her brother destroyed his life. Now Amanda has to decide if she'll let his choice destroy hers.