Zoë Marriott, author of DARKNESS HIDDEN, on taking responsibility for what you put on the page

DARKNESS HIDDEN is book two of the Name of the Blade series, and we're excited to have Zoë Marriott with us to chat about writing. 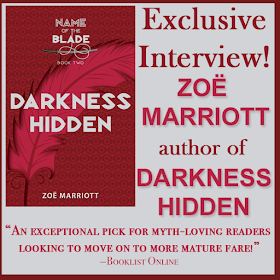 Zoë, what's your writing ritual like? Do you listen to music? Work at home or at a coffee shop or the library, etc?

My writing ritual has changed drastically over the years. I used to work thirty hours a week while also being a full-time carer for my father. My ritual was just to scribble into a notebook, as fast as I could, any where and any time that I had a spare minute - on the bus to work, in the breakroom in the office, in the hospital waiting room, etc. - and then type it up and revise it in the evenings or on Sundays.

A few years ago I was made redundant, but thanks to a generous writing grant from the Royal Literary Fund, I didn't have to look for another job right away. Then very sadly my father passed away. So in the past couple of years I've actually become a full time writer for the first time, and this has meant I've needed to try to develop good writing habits and a proper routine. At first I worked twelve hour days because I could, and often seven days a week. But I had a bit of a health wake-up call last year and it made me reassess things.

My average day now starts with a long walk with my dog, which clears my head and gets my blood moving. After I've fed him and my cats, I go up into my study - a tiny box room, almost a cupboard, really - which only has room for my secretaire, where I sit to write, and a printer, and lots of books. There's nothing else in it to distract me. Then I cue up my favoured playlist on my laptop. I make a handful of playlists for each book, which correspond to a specific character or mood. I'll usually sit and listen to the key song, the one that really captures the feeling I need to have, and I try to think in detail about what I need to accomplish that day. Then I get out my notebook - because I've never been able to kick the habit of writing in longhand first - and write for between forty-five minutes and an hour. When I've reached the end of my time, I swap to my laptop and write up and revise those pages. Then I do it again. I find that this helps to prevent too much pain in my hands - I have repetitive strain injury and my joints can get really painful if I do the same thing for too long.

If I'm having a good day, I can write between 1000 to 3000 words this way. I also make time for two more walks with the dog and some lunch, and stop in the late afternoon so I can make a hopefully healthy dinner. It sounds odd to put so much emphasis on eating and exercise, I know - but I've discovered that feeling exhausted and worn down all the time doesn't actually help you to write more or better, even if you do spend twelve hours a day on the laptop. Who knew?

This is an answer that changes day by day depending on what's going on in my own writing life. Right now I'd say: question your assumptions. Question your choices. Don't write the same old thing you've seen a million other writers do before and assume it's good enough. Look at the real world and real people and draw inspiration from that. Don't put yourself in the position where you must defend yourself by saying that your characters 'just come to you' exactly as they are, so you can't help it if they're all straight, white, able-bodied cis-gendered people. Don't use the same flawed, sexist or racist plot that every other author uses and then protest it's 'historically accurate' or make cracks about 'political correctness gone mad' when readers point this out. You are God on the page, and nothing that happens there is accidental. Take responsibility for this, and make sure that what you put out into the world reflects something truthful and real and honest, because otherwise your work will ultimately be hollow.

I'm working with my editor on a novel called Barefoot on the Wind, which is a reimagining of Beauty and the Beast set in a fairytale version of Feudal Japan. It's a companion novel to Shadows on the Moon. The heroine, Hana, lives in a small village which is surrounded by a cursed forest, the dark wood. No one has been able to leave the village for one hundred years, because anyone who strays too far into the trees never comes back. There is a monster in the forest. A monster that craves human flesh. After this terrifying creature nearly kills her father, Hana takes up her hunting gear and walks into the dark wood of her own free will, determined to track the beast and slay it. But she has no idea of the many frightening secrets lurking beyond the enchanted trees - and the monster in the forest may not be at all what she expects after all. 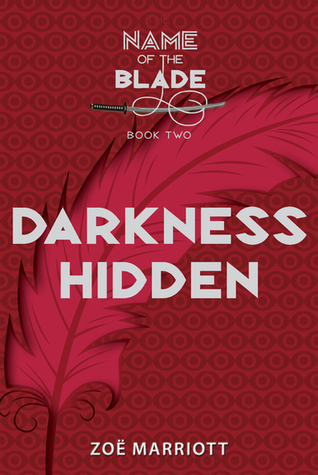 Against all odds, Mio has defeated the evil Nekomata and seen her love, Shinobu, restored to life. But in the wake of the battle, Mio’s unsettling connection to the katana—an ancient sword her family has been compelled to guard for generations—has grown more frightening. And now the Underworld has sent the Shikome—foul women whose feathers carry death—to spread a supernatural plague through London. With her best friend in the hospital, Shinobu’s very existence at risk, and the city in chaos, Mio realizes there is no way she can keep everyone she loves alive. What terrible sacrifice must she make to save the world?

I was born and raised in Lincolnshire, where the wild North Sea meets the gentle green-gold curves of the Wold, and I've known that I wanted to be a writer since I finished reading my first book; 'The Magic Faraway Tree' by Enid Blyton. I think I was about eight, but I've never changed my mind in all the years since then. I got my first publishing contract when I was twenty-two, but had to wait until I was twenty-four to see my debut novel - The Swan Kingdom - published. It went on to be shortlisted for the Branford Boase Award and the Lincolnshire Young People's Book Award, and become a USBBY Outstanding International Book, among other honours.

Since then I've written many other books and have been lucky enough to win or be nominated for many other awards, including the Great Britain Sasakawa Prize and a second place in the Lancashire Book of the Year Awards. I have also received grants from the Royal Literary Fund and the Arts Council England.

I currently live in a little house in a town by the sea, with my two rescued cats, one called Hero after a Shakespearian character and one Echo after a nymph from a Greek myth. I also have a springer/cocker spaniel called Finbar (otherwise known as The Devil Hound).

My favourite colour is green. My favourite food is Chinese dim sum. My favourite songs are 'I Will Follow You Into the Dark' by Death Cab for Cutie and 'Spem in Alium' by Thomas Tallis.
--

Have you had a chance to read DARKNESS HIDDEN yet? Do you eat right and exercise to keep yourself healthy for writing? Do you question your assumption and choices while writing?