Suzanne Nelson, author of SERENDIPITY'S FOOTSTEPS, on pushing through her doubts

We're delighted to have Suzanne Nelson here to tell us more about her latest novel SERENDIPITY'S FOOTSTEPS. 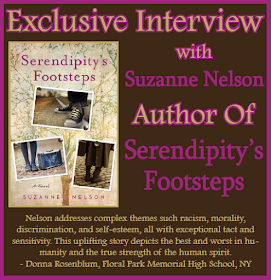 Suzanne, what was your inspiration for writing SERENDIPITY'S FOOTSTEPS?

This novel was born of many stories. The characters of Dalya, Pinny, and Ray lived in a corner of my mind for years before they were put to paper. In one of the earliest stages of brainstorming, I tried to make Pinny and Ray sisters by birth, but that story line didn't work. I wanted to write about the choice Dalya faces, of denying or embracing her faith and heartbreaking past, but didn't originally see how she connected to Ray and Pinny. It was the three characters' connection to the pale pink shoes that finally made the idea and writing "click." I have my sister to thank for that. For years, each time I passed lost shoes in the street or dangling from telephone wires, I wondered why they'd been left. There was one red slingback that sat on a boulder in front of a house in my home town for months. Whenever I drove passed it, I found it haunting my thoughts. Then my sister--an avid shoe-lover and my best friend--suggested that I write a story for all of those lost shoes. My sister was the real inspiration for the novel and the reason why Serendipity's Footsteps was finally born.

I wrote five different versions of the last chapter of the book before my editor and I finally agreed on one that worked. There was information I wanted to include about the girls' future, but knowing how much was enough or too much was difficult. One of my favorite scenes in the book is when Ken and Linnea Chantal have their "night dipped in magic" on the beach at Coney Island. I loved Linnea's zest for life. I wanted Pinny to inherit all that was good about her mother, especially her optimism and enthusiasm for the "More" of life.

How long did you work on SERENDIPITY'S FOOTSTEPS?

It was three years from starting the initial outline for the story to the final publication. I had to take some breaks from writing the novel to work on some other projects. Initially, I only had a few hours a week to work on it while my toddlers were in preschool. Balancing my writing time with my responsibilities as a mom of three young kids is always a challenge!

Before beginning Serendipity's Footsteps, I was tossing several book ideas about in my head. Of course, Serendipity's Footsteps was the book I was the most scared of writing. Structurally, I knew it would be challenging to write because of its alternating viewpoints and leaps in time. I was worried that my writing wouldn't live up to the vision of what I wanted for the book. My agent, Ammi-Joan Paquette, gave me this advice: Write the idea that frightens you the most. So the day I sat down to write the first sentence of the book, I took a deep breath, asked the fates for inspiration, and took a leap of faith. Now I know that my fear can't cripple me. Robert Frost once said, "The best way out is always through." Pushing through my doubts taught me to keep writing, no matter what. Good things and serendipity rise from fear.

What do you hope readers will take away from SERENDIPITY'S FOOTSTEPS?

That loss can be a beginning as well as an end. That who you turn to for friendship, family, and love is as much choice as chance. That serendipity and magic can be found in the most ordinary objects. That people change each other and make each other better through love. That there is a "More" to each person's life, if she has the courage to seek it out.

I have shelved two novel manuscripts and probably a half a dozen picture book manuscripts that will never get published. I wrote my first attempt at a novel when I was seventeen. It wasn't a strong or even very original piece, but writing it was a lesson in plotting, character development, and self-discipline. Not everything I write reaches readers, but I try not to get disappointed by that, because everything I write teaches me something new about the creative process, about structure and technique, or simply about myself. None of it's failure; it's a step closer to becoming a better writer.

My writing day starts with that first sip of mocha coffee. I can't type a single word without it! I sip, type, sip, type....that chocolate-y goodness flows into my soul and the words flow from my fingertips (or are squeezed slowly and excruciatingly from my fingertips, depending on how the writing is going on any given day). I also listen to music, but only instrumental songs. If I listen to music with lyrics, I either end up typing lyrics instead of stories or just giving up the writing and singing along! I am a solitary writer. On rare occasions I can be found haunting corners of my local library or coffee shop, but I think better in quiet, private places. I am much more productive in the morning than in the afternoons, but I try to write for at least five to six hours on weekdays. I usually work at home in a cozy overstuffed armchair surrounded by pictures of some of my favorite literary heroines (I may have a small shrine to Charlotte Bronte's Jane Eyre gracing my walls....That's completely normal, right?)

I am currently working on my next young adult novel, The Freedom Dress. It's a mystery about what happens to a 17-year-old southern debutante in the 1960s when her race is called into question and she returns to her family's plantation to uncover long-buried secrets. The novel delves into the history of slavery and Civil Rights and deals with themes of identity and prejudice. I'm very passionate about the story and feel it has a lot of themes that are timely and pertinent to our world today.

Dalya is the daughter of a cobbler in 1930s Berlin, and though she is only fifteen, she knows she will follow in her father’s footsteps. When she is forced into a concentration camp one violent November night, she must leave behind everything she knew and loved.

Ray is a modern-day orphan, jagged around the edges in every possible way. She sees an impulsive escape to New York as her only chance at happiness; there, she knows she’ll be able to convert her sorrows into songs.

Pinny is an unwavering optimist and Ray’s unintended travel companion on her passage to a new life. She inherited from her eccentric mother a fascination with shoes as a means of transformation and expression.

A single pair of shoes entwines these lives. How these women connect across different times and places is an unforgettable story of strength, love, bravery, memory, and the serendipity that binds us all together.

When she was in kindergarten, Suzanne Nelson jotted down in a school keepsake album that she wanted to be a “riter.” Though she clearly had issues with spelling, she persisted, composing cryptic poems about rainbows, fairies, mud, and even Star Wars in spiral notebooks all through elementary school. When she was seventeen, she filled four journals with her handwritten first novel, titled “The Dream Keeper.” To escape her chores, she often lied to her parents about what time her shift started at the local fast food joint so that she could spend an extra hour writing in the parking lot in her mom’s faded Buick. Her first published novel was The Sound of Munich, followed by Heart and Salsa, The Ghoul Next Door, Cake Pop Crush, You’re Bacon Me Crazy and Dead in the Water. She is a shameless fan of “The Sound of Music,” Hershey’s kisses, Charlotte Bronte, and Jane Austen, and can often be caught daydreaming of romping about gothic castles in lovely Victorian gowns. She was born in New Jersey, grew up in Southern California, attended college in Texas, and spent eight years as a children’s book editor in New York City. After decades of searching for her geographic “promise land,” she now lives in Ridgefield, Connecticut, with her husband and three children. When she is not busy playing the part of chauffeur, chef not-so-extraordinaire, and “Mommy Craziest,” she can be found locked happily away in her office writing.
--

Have you had a chance to read SERENDIPITY'S FOOTSTEPS yet? Are you able to keep you fear from crippling you? Does everything you write teach you something new about the creative process?