Sean Williams, author of HOLLOWGIRL, on encouraging readers to be easier on themselves

HOLLOWGIRL is the final book in the Twinmaker series, and we're delighted to have Sean Williams with us to share more about it. 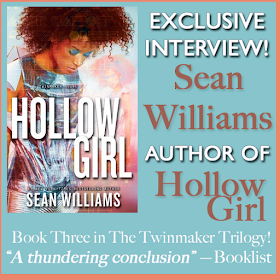 Sean, how long did you work on HOLLOWGIRL?

It took me a little over a year to write Hollowgirl, but really I’d been thinking about it ever since I sold the series, way back when. The beginning of every story determines the end, and I’ve always known pretty much how the final moments between Clair and Q would unfold, but there were so many details to get exactly right, and as the book started to take shape I quickly realised just how incredibly difficult it was going to be. This was easily the hardest book I’ve ever written, and the most rewarding. Seeing it all unfold was almost magical. I’m really pleased with how it turned out.

There is a scene in Hollowgirl where Clair realizes that she’s lost the guy she loves. That sounds like a spoiler, but as with everything else about this book, it’s complicated. He’s still him, but he’s not the version of him she fell in love with. It’s like . . . imagine you go out with someone for year, then they get amnesia and suddenly they don’t remember that year anymore. So you have to start all over again, unable to take anything for granted. Writing that scene was hard, because in some ways it’s easier with relationships for the endings to be clean. Or the beginnings. I didn’t like putting Clair through that. It came from painful places in my own past.

The scene I’m most proud of is a sequence at the end where everything comes together in this stupendous, disastrous catastrophe out of which the resolution finally comes. Darkest before dawn, and all that. I had a lot of fun writing that sequence, and I think it shows.

What do you hope readers will take away from HOLLOWGIRL?

I hope that Hollowgirl and the rest of the series will encourage readers to be easier on themselves. Everyone makes mistakes; learning to acknowledge those mistakes and to forgive ourselves for them is incredibly hard. That’s a journey Clair goes through several times over, and one I’m still pursuing.

The other thing I’d love to leave readers with is the thought that the world as we know it now is neither the way it’s always been nor the way it will be in times to come. Everything changes, and to a large degree we can direct those changes. Clair’s world is one I would like to live in: no kings or presidents; no money; no fouled-up environment. Someone needs to make it happen. If I’ve influenced just one reader to get out there and make a difference, that would be awesome.

I’m working on a new fantasy series for middle-grade readers with Garth Nix, to come out in 2017. I’m also about to start my next YA novel, In My Mind, which is also due in 2017. This will be something different for me: contemporary novel in first-person, set largely in the real world. No world-shattering conspiracies, mind-bending technologies, or twins of any kind--what a relief! Clair’s world has been destroyed – again. The only remaining hope of survival is for her and Q to enter the Yard, a simulation as detailed – and as real – as the home they have lost. But in the Yard there are two Clair Hills. The other Clair is headstrong, impulsive, suspicious – just like Clair herself used to be, and their very existence is causing cracks.

As Clair searches for a solution, a surprising new ally emerges from the ashes. Together they fight their way through the digital and political minefield in the hope of saving Jesse, her friends and the whole of humanity.

#1 New York Times bestselling Sean Williams lives with his family in Adelaide, South Australia. He’s written some books--forty-two at last count--including the Philip K. Dick-nominated Saturn Returns, several Star Wars novels and the Troubletwister series with Garth Nix. Twinmaker is a YA SF series that takes his love affair with the matter transmitter to a whole new level. You can find some related short stories over at Lightspeed Magazine and elsewhere.


Have you had a chance to read HOLLOWGIRL yet? Do you draw on the pain in your past to write scenes? Do you write about worlds you'd like to live in?