Today we're welcoming Diana Renn to the blog, to talk about character development... the active way. Diana's BLUE VOYAGE was published October 13th of this year. 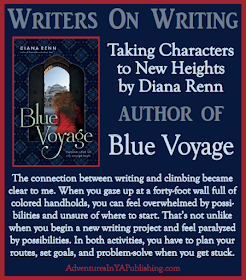 Each teen sleuth in my mystery novels has a passion for something other than mystery-solving: Violet, in Tokyo Heist, is a manga fan and artist; Tessa, in Latitude Zero, is a cyclist who gets drawn into the world of international bike racing; Zan, the main character in Blue Voyage, is a rock climber. The fun of writing these characters is getting to explore their worlds, all in the name of research. One little thing got in the way of my researching Zan’s interest, though. A fear of heights.

It’s not a crippling fear, but it’s something that seems to have worsened over time. I am no longer a fan of the Ferris wheel. I instinctively grasp for a railing when I’m at the observation deck of a skyscraper. Okay, I’ll admit it, I don’t even love a tall staircase. So when my young son decided to try rock climbing – inspired by my avid climber brother-in-law – I gently tried to steer him toward other, flatter, interests. Swimming? Soccer? Karate? Nope. My boy wanted to climb – and he wanted me to go with him.

Determined not to let my fear get in the way, I went with my son to the climbing gym. After watching my sister and my brother-in-law scoot up to the ceiling and then belay down, graceful as spiders, I could see how it might be fun. I took a deep breath, cinched my harness, and climbed, trusting the professional rock climbing coach holding my life on the line.

I made it halfway up the wall, then froze, despite the encouraging cheers. “I’m not scared,” I protested—or lied—upon my descent. “I just don’t really feel the need to go higher.”

Grounded, I took on the observer role as my son took up this sport. Watching all the different people in the climbing gym, from beginners to experts, I became fascinated by rock climbing. I noticed a lot of teens were doing it. At the time I was just beginning to write Blue Voyage, and I knew I needed a passion for my main character. I could easily picture Zan in the climbing gym, given her body type and her thrill-seeking gene, and I began to imagine a life for her there. I suddenly knew that in climbing gyms Zan found peace from her public life as a politician’s daughter, and acceptance from fellow climbers who didn’t care about her family life or her skin disorder, vitiligo. An adrenaline-seeker, Zan knew, on some level, the rush from the climbing wall was a healthier alternative to her other hobby, shoplifting. But breaking away from her criminal tendencies wasn’t going to be easy for her.

Once I made Zan a climber, my story started to really take off. Conveniently, Turkey – especially the coast where the story opens – has an abundance of rocks to tempt Zan with their challenges. During Zan’s adventure, she puts her climbing skills to the test to save her life, save her friend’s life, chase a cursed treasure, and try to expose the masterminds of a smuggling ring. (All in a day’s work!) Rock climbing as a sport has a lot of metaphoric meaning, and it becomes a great source of inner strength and resilience for Zan.

In researching Zan’s character, I spent many months in climbing gyms with my son, tackling the walls again at last. Inspired by watching so many people take risks on the wall, I pushed myself to go higher each time. When I couldn’t pass my point of terror, I’d switch to bouldering, at lower altitudes, and focus on technique.

I experienced a wide range of emotions on the wall. I noticed Zan’s inner life becoming richer, in turn, when I went back to the page. Sometimes I began an ascent while thinking about how she would view it, or what might be going through her mind, and I came up with fresh insights into her backstory and her hopes and dreams. I didn’t completely conquer my fears up there, but I could see how Zan did. I learned rock climbing lingo from my rockhound brother-in-law and came to really respect the people who do this sport seriously, and the kind of problem-solving they do. A rock climber makes a perfect sleuth, in fact, because they are always solving puzzles.

The connection between writing and climbing became clear to me. When you gaze up at a forty-foot wall full of colored handholds, you can feel overwhelmed by possibilities and unsure of where to start. That’s not unlike when you begin a new writing project and feel paralyzed by possibilities. In both activities, you have to plan your routes, set goals, and problem-solve when you get stuck. Once you get going, sometimes you fall, and you have to begin again. In climbing, a trusted partner belays you, holding the other end of a rope. In writing, we can also belay one another, serving as coaches, cheerleaders, critique partners, or even co-authors in collaborative writing projects.

I never did reach the ceiling during my research phase, but I found fresh inspirations for my novel and got to know my main character very well up there on the climbing wall. Somehow I think Zan would approve.