On Self-Confidence in Writing by Lisa Maxwell

Today, we're welcoming Lisa Maxwell to the blog, to talk about a very elusive concept that is so important to the way we create: self-confidence. Lisa's second novel, GATHERING DEEP was released on October 8th, and her third, THE STARS TURNED AWAY will be published in February. 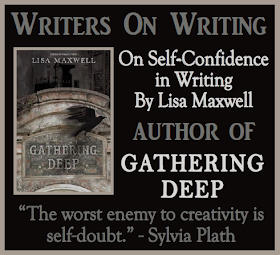 On Self-Confidence in Writing by Lisa Maxwell

The thing that I struggle with more than anything else is self-confidence. Like a lot of other writers, I’m an introvert. Putting myself out there is probably one of my least favorite things to do. Maybe there was a point, right when I was about to finish my PhD, where I actually felt sure of myself enough to be truly confident in the future I had ahead of me. I’d worked my behind off for six long years, went above and beyond doing all the things a good grad student who wanted a job could do, and thought for sure that I’d finally done enough. I was so sure of myself and my prospects, I bought two suits and a plane ticket to California (where the interviews were going to be that year). And then… the economy tanked, there were no jobs, and I had a non-refundable ticket to California that I didn’t need. I don’t think I’ve ever felt like more of a failure, more unworthy in my entire life.

Strangely enough, that failure led to me to writing, maybe it was because that failure freed me in a way. I’d always thought, for whatever reason, that if I just did enough, worked hard enough, I could prove myself. I could eventually be as successful as I wanted to be. Not getting a job after my degree was a huge disappointment, but it was also a huge revelation. There I was, jobless, without any real career prospects in the industry I’d spent almost a decade training myself for. I’d done everything right, and it didn’t work. All the hard work in the world wasn’t enough to counteract a pitiful economy and constricting education sector I found myself in a completely novel position (for me, at least)— and the thing was, it wasn’t really about me.

From the time I declared my major as English, I spent years telling people that I didn’t want to write books. I just wanted to read them. To be honest, I never thought I did. I never thought I could. Writers were people way more talented than I could ever possibly be.

Looking back, I realize now that I was just afraid. I was afraid of not being able to write as well as the authors I so admired. I was afraid of being a failure, of not being good enough. But over-educated and underemployed,aAll those fears I’d had for so many years about writing didn’t matter at that point—I was already at the bottom, career-wise. I was in a place where I had nothing left to lose.

There was a strange kind of freedom in that.

I wrote my first book, because I needed to. I needed stories in my life, even though I wasn’t taking or teaching classes. I needed beautiful words and the escape that literature had always provided me, so I decided to try making it. And then to my utter surprise, it worked. I found out that I loved writing stories even more than I loved reading. I discovered that I was pretty decent at writing them, and that I wanted to keep writing them.

When I first started writing, I was writing with the kind of desperation that comes from having your dreams dashed. Maybe it’s because when I first started, I didn’t really think the whole publishing a book thing would work. Or maybe it’s more accurate to say that I didn’t believe getting published would happen as quickly as it did for me. I expected to fail…a lot. I expected to finish books, only to box them up and store them away because they weren’t ready yet. I wrote with an almost complete lack of expectations for myself or the work, but not without hope. Something about that combination did work, though. Maybe it was because for the first time I wasn’t worried about being good enough. I was just concerned with the work itself.

Right about then, I think the fears about being good enough started to rear their ugly heads again: was the book good enough? Was I doing enough to promote it? Could the next book be better? Did I deserve to be considered an author? Was I really enough to be a “real” author?

Those fears never really go away, it seems. There’s always someone writing better, getting a bigger deal, doing a better job of promoting. There are always multiple somebodies who look like they have this author thing down, that they are in control. And the more I see that, the more I struggle with my own self-doubt.

Four books later, I’m not sure I feel like a “real” author, whatever that means. Writing—and especially being paid for my writing—still seems like this miracle I fell into when things were at their worst—a complete surprise and an amazing gift. But when it comes to the business side, it’s so easy for self doubt to creep in. Those old fears of being enough—especially now that I know that, sometimes, all the hard work in the world won’t be enough.

I’m working on my fourth contracted book now, a book that I’ve outlined and am so excited about. A book that my publisher has approved and is also excited about. And even with all that excitement, the old fears come creeping back. Can I make this what I want it to be? Will what I do with the book be enough to make it popular? To make others like it? Am I good enough to write this story? Who am I to think I could write this story?

No surprise, the fear of not being enough has done a number on me. The writing is going excruciatingly slow right now. I know these characters, and I love their story, but all of those doubts are back, creeping in again and making writing harder than its been in a while. I’ve been letting my struggles with self-confidence get in my way, and I have to keep reminding myself to go back to the page, back to the words. I have to make myself try to remember that time when I was writing with nothing left to lose, a time when all that mattered was the work, because whatever happens—I have the work itself, and that always is enough. Even when it’s at its hardest.

When Chloe Sabourin wakes in a dark, New Orleans cemetery with no memory of the previous days, she can hardly believe the story her friends tell her. They say Chloe was possessed by a witch named Thisbe, who had used the darkest magic to keep herself alive for over a century. They tell her that the witch is the one responsible for the unspeakable murders that nearly claimed the life of Chloe's friend, Lucy. Most unbelievable of all, they say that Thisbe is Chloe’s own mother. As she struggles with this devastating revelation and tries to rebuilt her life, Chloe wants nothing to do with the magic that corrupted her mother…especially since she feels drawn to it.

Now, a new series of ritualistic killings suggests that Thisbe is plotting again, and Chloe is drawn unwillingly back into the mystical underworld of the French Quarter. To stop Thisbe before she kills again, Chloe and her friends must learn what they can from the mysterious Mama Legba. But when her boyfriend Piers vanishes, Chloe will have to risk everything and embrace her own power to save the one person she has left… even if that means bringing down her mother.

Lisa Maxwell is the author of Sweet Unrest (Flux), Gathering Deep (Flux, 2015) and The Stars Turned Away (Simon Pulse, 2016). When she's not writing books, she teaches English at a local college. She lives near DC with her very patient husband and two not-so patient boys.