After the riches of last week, we only have one book to give away this week, but it's a great one: NYT bestselling author Christopher Pike's highly anticipated STRANGE GIRL. Enjoy reading through the other books releasing this week, and enjoy the rest of your November! 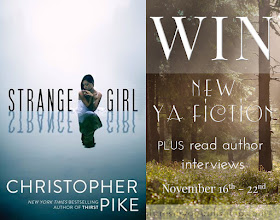 THIS WEEK'S YA BOOK GIVEAWAY 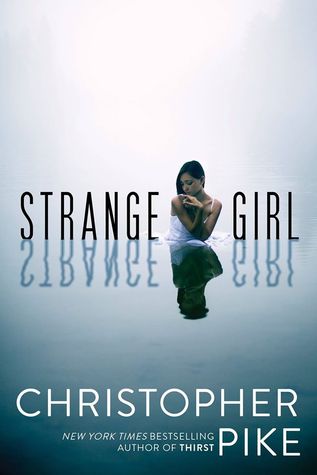 From #1 New York Times bestselling author Christopher Pike comes a brand-new fascinating and seductive new novel about a girl with a mysterious ability—but one that carries an unimaginable cost.

From the moment Fred met Aja, he knew she was different. And she was.

Aja had a gift. But her gift came with a price.

After a shocking sequence of events, Fred must look back at their relationship, and piece together all of their shared moments, so he can finally understand Aja’s precious gift…and its devastating repercussions.

Author Question: What is your favorite thing about Strange Girl?

Aja is the name of the major character in the book. Aja is the Strange Girl. I started writing the book in March of 2014 and I remember very vividly how, each day when I woke up, I was excited to work on the book. I’d felt that way before, of course -- I’ve written so many books. But I think with Aja -- I liked spending time with her. I felt like Fred in the book, the guy who narrates the story. I felt in love with Aja. Pretty weird, huh? To fall in love with a character I’d created. But I feel that was the whole point. I didn’t feel like I’d invented Aja. Each day I sat to write, I felt like she was visiting me.

My favorite thing about the book -- now that I’ve had a chance to sit and read it like a normal reader -- is that it touches me deeply. Again, I know that sounds silly. How can a book I wrote touch me emotionally? Well, when I wrote it I didn’t know anything more about Aja than Fred did. I wasn’t sure who she was, why she was different, what she would do next. It was only when I was deep into the book that I began to get a clear idea of who or what she might be. For Fred, the mystery of Aja is like peeling an onion. He keeps coming up with a fresh take on her, a new opinion of her. Again, I felt as Fred did. Aja kept surprising me. In that way Strange Girl is a mystery, but not an ordinary mystery. I like to call the novel a “Mystical Mystery.” As far as I know, no one has ever written one of those before. To me Strange Girl is unique, as unique as Aja herself is. In this latest novel from National Book Award finalist Martine Leavitt, a schizophrenic teen believes that Bill Watterson can save him from his illness if he creates one more Calvin & Hobbes comic strip.

Seventeen-year-old Calvin has always known his fate is linked to the comic book character from Calvin & Hobbes. He was born on the day the last strip was published; his grandpa left a stuffed tiger named Hobbes in his crib; and he even has a best friend named Susie. As a child Calvin played with the toy Hobbes, controlling his every word and action, until Hobbes was washed to death. But now Calvin is a teenager who has been diagnosed with schizophrenia, Hobbes is back—as a delusion—and Calvin can't control him. Calvin decides that if he can convince Bill Watterson to draw one final comic strip, showing a normal teenaged Calvin, he will be cured. Calvin and Susie (and Hobbes) set out on a dangerous trek across frozen Lake Erie to track him down. 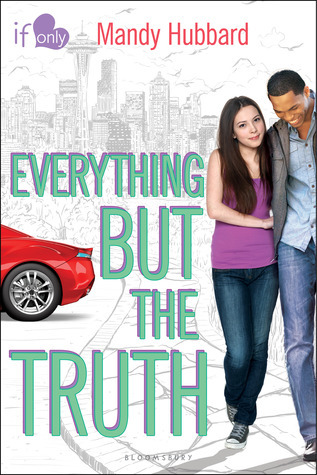 If Only . . . she wasn't pretending to be someone else! The If Only romance line continues in this fun rags-to-riches romance.

Holly Mathews' mom is the new manager of a ritzy retirement home, and they just moved in. But having super-rich retirees as her only neighbors isn't a total bust, because the gorgeous, notorious Malik Buchannan is the grandson of a resident. Just one problem: when they meet, Malik assumes Holly is there to visit her own rich relative. She doesn't correct him, and it probably doesn't matter, because their flirtation could never turn into more than a superficial fling . . . right? But the longer she lives in his privileged world, the deeper Holly falls for Malik, and the harder it is to tell the truth . . . because coming clean might mean losing him.

For anyone who has dreamed of their own Cinderella story, this romance shows that when it comes to true love, the best person to be is yourself! Michael used to live to game, but the games he was playing have become all too real. Only weeks ago, sinking into the Sleep was fun. The VirtNet combined the most cutting-edge technology and the most sophisticated gaming for a full mind-body experience. And it was Michael’s passion. But now every time Michael sinks, he risks his life.

The games are over. The VirtNet has become a world of deadly consequences, and Kaine grows stronger by the day. The Mortality Doctrine—Kaine’s master plan—has nearly been realized, and little by little the line separating the virtual from the real is blurring. If Kaine succeeds, it will mean worldwide cyber domination. And it looks like Michael and his friends are the only ones who can put the monster back in the box—if Michael can figure out who his friends really are.